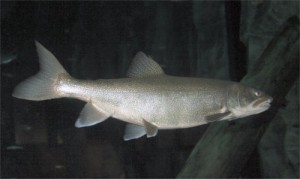 In the alphabet soup of Great Lakes contaminants, PCBs, PCDDs and PBDEs usually rule the broth.

But in a recent study, Canadian scientists took a closer look at another noodle.

They examined a group of seldom-studied, dioxin-like contaminants called polychlorinated naphthalenes, or PCNs. These chemicals can have toxic effects including chloracne and liver damage.

And although industry abandoned their use 30 years ago, the researchers still found the chemicals in lake trout collected from Lake Ontario from 1979 and 2004.

The study, published in the May issue of Environmental Toxicology and Chemistry, found that PCNs in lake trout have declined, but can still trigger warnings against eating the fish.

But PCNs aren’t included in monitoring programs in Canada or the U.S., said Paul Helm, study author and research scientist with the Ontario Ministry of the Environment.

Fish advisories for PCBs and dioxins are based on a scale of toxicity that measures many different contaminants. Though some researchers have proposed standards for including PCNs on that scale, those standards won’t be used in fish monitoring programs until the World Health Organization makes them official.

Helm said that needs to happen.

“In some cases they may be just as prevalent or of as much concern as some of the other compounds that we already focus on like dioxins,” he said.

Other studies have found low PCN concentrations in fish in lakes Michigan, Superior and Huron, and high levels in Detroit River sediment. People probably haven’t been gobbling up PCN-laced fish for lack of warning, Helm said. Fish with high levels of PCNs are most likely already under a consumption advisory for PCBs.

“We think it’s not good that those things are out there, but it shouldn’t be a bigger problem that comes up and surprises us,” Helm said.

Another group of Ontario scientists is investigating PCN levels in fillets of other species of Lake Ontario sportfish like salmon, catfish and white fish.

PCN production began in the middle-1800s and use peaked in the 1960s. The heat- and weather-resistant compounds were used in engine oil additives, electrical insulators and gasmask liners. By the 1970s, reports of liver damage in workers exposed to PCNs pushed industries to switch to PCBs, which have similar properties but were deemed safer.

Though industries don’t use or produce PCNs anymore, the pollutants are still released through the incineration of municipal and industrial waste, said Kurunthachalam Kannan, ecotoxicologist with the New York State Department of Public Health’s Wadsworth Center.

“That’s why we need to be concerned about PCNs,” Kannan said. “Although they are not produced by industries they are produced when you combust or incinerate waste materials.”

In some locations, PCNs contributed more to the overall toxicity of the sediments than PCBs or dioxins, he said.

“These two studies together, fish and sediment data combined, suggested that there are local sources and PCNs are critical contaminants of concern in the Detroit River,” Kannan said.