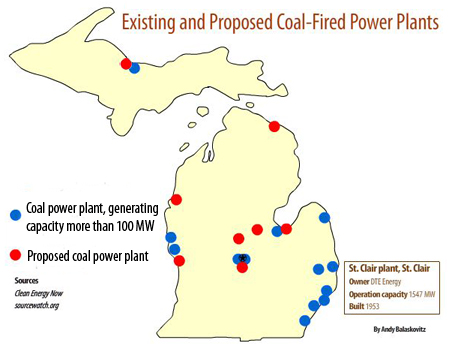 More than 3,000 feet below the ground in Gaylord, Mich., scientists hope to find solutions to America’s energy dilemma.

They seek evidence of a coal-powered future that does not contribute to global warming. And Michigan may be sitting on a key part of the answer.

Last year they injected 10,000 metric tons of carbon dioxide (CO2) underground into a geological feature called a saline formation. They want to see if it will stay there forever.

If it works, they hope CO2 emissions from coal plants can be safely stored underground and not released into the atmosphere where they are known contributors to global warming.

It is the largest CO2 injection by this method in the Midwest and will serve as a basis for similar projects, said Lynn Brickett, project manager for the National Energy Technology Laboratory, a branch of the Department of Energy (DOE) in Pittsburgh.

The CO2 injection well is owned by Core Energy in Gaylord, Mich.

Initial results are good, Brickett said. The CO2 is where they expect it to be and the Department of Energy wants to inject another 50,000 tons.

“So far there is no CO2 at the surface,” she said. “It [CO2] is moving throughout the reservoir consistent with what our models predicted.”

Since the injection, the part-liquid, part-gas CO2 at Gaylord has traveled less than 150 feet. This figure matches the DOE’s estimates, which means they can easily tell where the liquefied CO2 is and is not. For example, it hasn’t reached the surface or reached regions underground they weren’t expecting.

Migrating CO2 to unknown regions is the biggest concern for capturing CO2. Scientists need to keep track of its location, but more importantly, if CO2 escapes underground and reaches the surface, it can be extremely harmful to humans.

Coal plants are one of the major emitters of CO2. With seven new coal plants in the application process, Michigan stands to benefit a great deal from leading in carbon capture technology.

The Federal government recognizes CO2 as a greenhouse gas and contributor to global warming. In Michigan, stationary sources like coal plants emit about 100 million tons of CO2 annually. In 2007, the U.S. emitted 21.5 billion metric tons of CO2 from coal-fired power plants, according to the Energy Information Administration.

However, the DOE estimates beneath Michigan’s surface is a storage capacity of between 22 billion and 87 billion metric tons for CO2.

“Cautiously, we’re looking at about 40 billion tons worth of capacity. If we can get 100 million tons per year underground, that’s 400 years worth of storage,” said Dave Barnes, a geologist at Western Michigan University and contributor to the DOE’s studies in Gaylord.

“That’s a lot. Certainly Michigan is unique for the Midwest region.”

That is why the DOE looks to Michigan and the surrounding region to store CO2 far below the surface. Government funding for the region has passed $100 million over the past 5 years.

The basic idea is to inject deep underground large quantities of carbon that would have otherwise gone to the atmosphere. Most methods involve liquefying the gaseous CO2 to provide mobility underground. Terms like “clean coal” mainly address carbon capture.

Michigan is part of the Midwest Regional Carbon Sequestration Partnership, a consortium of private businesses, government agencies and universities that tests carbon capture in the Midwest. One in four Americans lives in this eight-state region which produces one-fifth of the U.S.‘s electricity. Three quarters of that electricity is from coal plants, which release about 830 million metric tons of CO2 into the atmosphere per year (in the region), according to the consortium.

The Midwest consortium received in early November the DOE’s newest grant for exploring carbon capture sites. It was for $61 million and the plan, Phase III, will span 10 years. One million metric tons of CO2 will be injected over four years at an ethanol plant in Greenville, Ohio.

Brickett said the Gaylord test would be used as a model for future projects.

“Characterization [of a site] is crucial to this process,” she said.

West Michigan in particular has special geological formations crucial for capturing carbon underground, according to Barnes.

There are plans for a coal plant in Holland that would use carbon capture to store its emissions underground. Barnes said that project is just waiting for public and federal support to get it started.

Barnes said there are many places in the Mount Simon Sandstone formation, the underground reservoir that stretches from northern Michigan to parts of Indiana and Illinois, that are best for storing CO2.

Three of Michigan’s major coal plant proposals call for creating 2,150 megawatts of power. While some of that will be generated from renewable fuels, the majority will come from coal. Those three will also account for most of the 15 million tons of annual CO2 expected by the proposed plants.

Consumers Energy’s application to expand its Karn/Weadock plant near Bay City is the largest proposed coal plant in Michigan at 800 MW. Clean Energy Now, a collection of environmental groups throughout Michigan, estimates the plant’s CO2 output at about 4.2 million metric tons per year.

At the same time, Consumers is preparing for regulations that may some day include capturing their carbon emissions, said Jeff Holyfield, director of news and information for Consumers Energy in Jackson.

“It’s an instance of prudent planning,” he said. “Our expectation is not if there will be regulations on greenhouse gas emissions, but when.”
Consumers’approach to carbon capture, as outlined in their permit, is to provide a sort of safety net for when the technology is widespread and commercially used.

Holyfield predicts that could take as long as 20 years.

WHAT IS CCS TECHNOLOGY?

CO2 that would have normally been emitted into the atmosphere from a company is instead liquefied and piped thousands of feet below the surface.

This existing infrastructure made the northern Michigan region a particular place of interest, Barnes said.

The pipeline that takes CO2 from the gas processing plant about nine miles to Core’s injection site.

“CCS has been going on for years up north for oil and gas extraction. It produces a product that can be sold while at the same time storing CO2,” he said.

A third method of capturing CO2 is in coal seams that are unmineable. In most instances, CO2 is used similar to the oil recovery method for extracting the methane gas. However, this method is far more prevalent in Appalachia than it is in Michigan, where coal seams are more common.

There are also plans in Alma and Filer Township near Manistee to construct a coal plant that gasifies the coal before it’s burned. Pollutants are removed from that “syngas” and steam generated from the process and burning of the syngas can be used for energy.

Initial proposals for these two plants are yet to be approved by the MDEQ.

Perhaps one of the reasons why carbon capture is not employed on a commercial and national scale is due to safety, scale and cost concerns. Also, if carbon capture is a part of America’s future, then so is coal. Environmentalists claim using coal for energy is outdated and we must turn our attention to alternative fuels.

Clean Energy Now, a collection of environmental groups in the region, has been busy alarming the public to stop new coal plant proposals.

“Unless we change direction now and end the coal rush, Michigan will stand alone while the rest of the nation moves away from coal, creates renewable energy jobs and joins the fight against global warming,” said Cyndi Roper, executive director of the state chapter of Clean Water Action.

DOE officials say they’re checking to make sure CO2 will not migrate to the surface or contaminate drinking water.

Aside from emitting vast amounts of greenhouse gases, extracting the coal is cause for debate. Environmental groups feel strongly against practices like mountaintop removal — literally dissecting mountains from the top down to reach coal — a practice some argue is necessary for supplying America’s coal demand.

“Even if you capture CO2, you still have the mining process for extracting coal and energy demand for piping it underground,” said Tiffany Hartung, conservation organizer for the Sierra Club in Oakland County.

“We need to move toward clean energy technology. Coal is the fuel source of the past and coal power plants are the technology of the past,” she said.

Another concern: If large amounts of CO2 spread through groundwater or reached the surface, current regulations do not place liability on the company managing the leak.

Tremaine Phillips, energy program associate for the Michigan Environmental Council, said his group is worried about that.

“Companies who would like to employ this technology would not take on this liability. We’re opposed to that. Someone has to keep an eye on the sites,” he said.

“We’d like to say ‘let’s move policies away from coal all together,’ but we also know CCS has to be a part of the solution if it works,” he said.

There is no doubt that constructing coal facilities or retrofitting old plants capable of capturing carbon dioxide will prove costly. A concern is that these costs will be handed down to consumers.

But this might be a cold, hard fact of the future, across all types of energy.

“The simple fact is, whatever system is derived or policy is put in place to deal with CO2, customers will bear the cost in the end,” said Holyfield, of Consumers Energy. “Our first priority is to provide a reliable supply of energy at an affordable price.”

Consumers Energy reported last year that coal plants must be included in an energy portfolio that meets consumer demands.

Holyfield said Michigan will need 5,000 more megawatts of power by 2025. Among Consumers’ 1.7 million residential customers, a typical household uses 8 percent more electricity from coal than they did 10 years ago.

He addressed efficiency standards as an example and a solution to this rise. Consumers’ natural gas customers use 17 percent less gas than they did twenty years ago due to newer efficiency models in stoves, water heaters and furnaces, he said.

On the flip side, a plasma television uses four times more electricity than a standard television, he said.

“Energy efficiency can make a big difference. As customers make [those] decisions, they need to look within first,” he said.

Barnes said that while alternative energy is important for America’s future, coal-powered energy can not be simply tossed aside.

“Carbon capture gives us some confidence in a smooth transition into alternative fuels,” he said. “It would be unfeasible to unstrap the coal industry all at once.”

Speed and economics play an essential role in carbon capture’s future. The International Energy Agency and the Union of Concerned Scientists both came out recently saying that if carbon capture has even a slight future in America, it needs to happen now.

President-elect Barack Obama strongly supported carbon capture and keeping coal in America’s energy future. In Lansing on August 4, he said, “We’ll invest in technology that will allow us to use more coal, America’s most abundant energy source, with the goal of creating five first-of-a-kind coal-fired demonstration plants with carbon capture and sequestration.”

It may be 20 years before widespread carbon capture is in place and the prize of mitigating climate change is in reach. But in Michigan, the race has already begun.