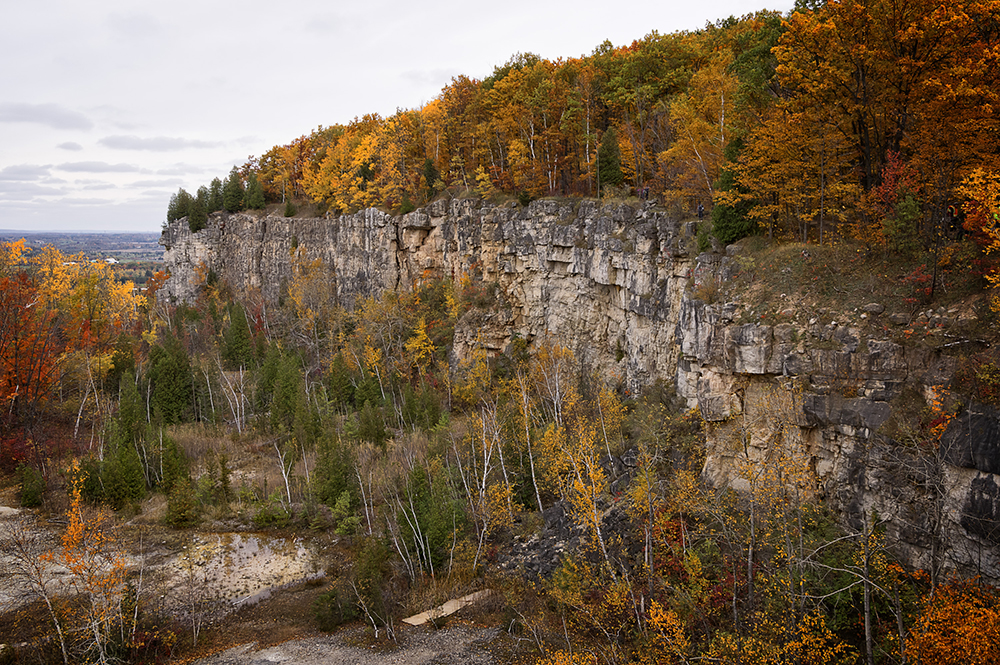 There’s a tussle underway in southern Ontario 25,000 years in the making.

The area’s population is growing rapidly, pitting suppliers of sand, rock and gravel against citizens’ concerned about the impact urban sprawl and aggregate extraction have on the environment.

“We waged a tremendous battle for 9 years,” said  Graham Flint, president of Gravel Watch, an organization formed to protect the environment and communities from  aggregate extraction.

Before joining the organization, Flint found himself fighting a proposed aggregate operation near his home in Flamborough, Ontario.

Ultimately his efforts were rewarded.  The operation withdrew its permit application.

Flint’s fight is emblematic of a broader dispute playing out in the region.

There are at least 6,000 aggregate pits and quarries in southern Ontario, Flint said.  These operations leave the land scarred, and bring noise, dust and damage to roads from trucks weighed down with aggregate.

“The last vestiges of the natural environment in southern Ontario are also highly valuable to the aggregate industry,” said Keith Brooks, programs director for Environmental Defence in Toronto.

The setting for this disagreement developed long before humans lived there, by forces difficult to imagine today.

On a map, southern Ontario has the shape of a badly knapped flint arrowhead wedged between Lake Huron and Georgian Bay to the north, and Lake Erie and Lake Ontario to the south, its tip resting at the Detroit River.

The deep bedrock, the legacy of the glaciers and the impacts of the modern climate and people explain the landscape today, said Joe Desloges, a professor of geography and earth sciences at the University of Toronto.

The last major advance of glacial ice began creeping southward 25,000 years ago, covering what is now southern Ontario in more than a mile of ice, said Desloges, who is an expert on the geologic and human history of the region.

The ice retreated from the area 13,000 to 14,000 years ago, leaving behind untold tons of raw material for the modern economy and the contemporary dispute.

Sand and gravel deposits are more than 850 feet thick in some places, Desloges said.   It speaks to the power of more than a mile thick ice slowly grinding over the land, transporting material sometimes hundreds of miles. 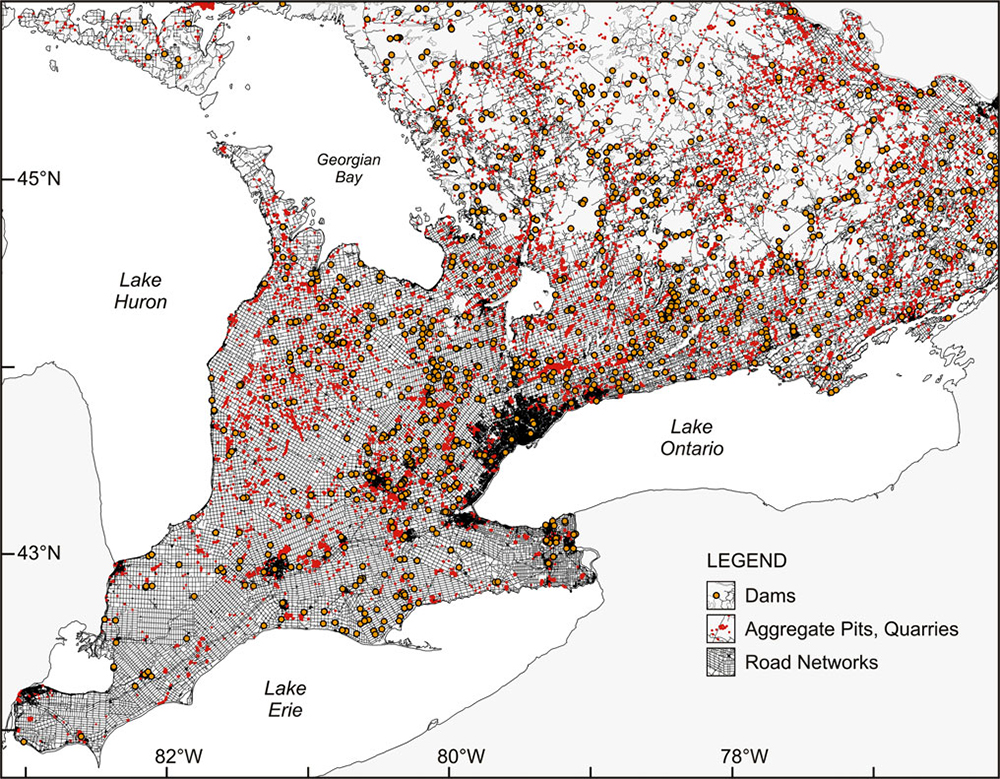 Diagram of human impacts in southern Ontario. From Joe Desloges et al., in Geomorphology of the Great Lakes lowlands in eastern Canada

The Niagara escarpment is an iconic feature in southern Ontario’s landscape, familiar to most as the cliff face of Niagara Falls.

Its origin predates the glaciers.

Its hulking presence on the land is a reminder that ancient rock lies beneath material left by the glaciers.

The escarpment is a ridge comprised of dolomite, sandstone and shales, Desloges said.

The dolomite, known as the Amabel formation, resists erosion and sits on top of softer sandstone and shales.  Over millions of years the softer stone eroded away leaving the escarpment we see today, he said.

These landscapes are valuable to the aggregate industry.

In the northern tier of the United States and most of Canada, glacially derived river and lake deposits provide huge reservoirs of sand, gravel, silt and clay for construction and engineering, Deloges said.

“The aggregate industry and quarrying for crushed limestone is huge in southern Ontario,” he said.

As Flint and Brooks can attest, this sometimes causes friction between those wanting to preserve the land and proponents of growth and the aggregate industry.

Nowhere in southern Ontario is this more evident than the Golden Horseshoe region.  The greater Golden Horseshoe, encompassing Toronto and Hamilton, is home to two thirds of Ontario’s populace and 25 percent of Canada’s entire population.

Brooks says the growth in the Golden Horseshoe is pressuring the region’s environment.

Toronto’s skyline is undergoing a building boom, he said.  There’s high demand for cement and concrete from local sources.

Brooks and his organization are concerned about the impact urban sprawl and aggregate extraction have on southern Ontario’s lands.

The Oak Ridges Moraine and Niagara escarpment, are especially vulnerable to exploitation by the aggregate industry, Brooks said.

The Niagara escarpment is an important source of water for rivers flowing into Lake Ontario.  There’s concern that disruption in the escarpment may negatively impact these rivers, said Brooks.

The Ontario provincial government introduced a Greenbelt Plan in 2005 to identify and protect critical landscapes, including parts of the Oak Ridges Moraine and Niagara escarpment, to guide land use planning and plan for future growth in the greater Golden Horseshoe.

“We accept that we do need some aggregate.  We accept we’re building things in Ontario and we have demand for the product, but we also accept that we need to do better in terms of the impact on the environment and on communities and indigenous people,” Brooks said.

One thought on “Ontario’s origins lead to land use disputes”