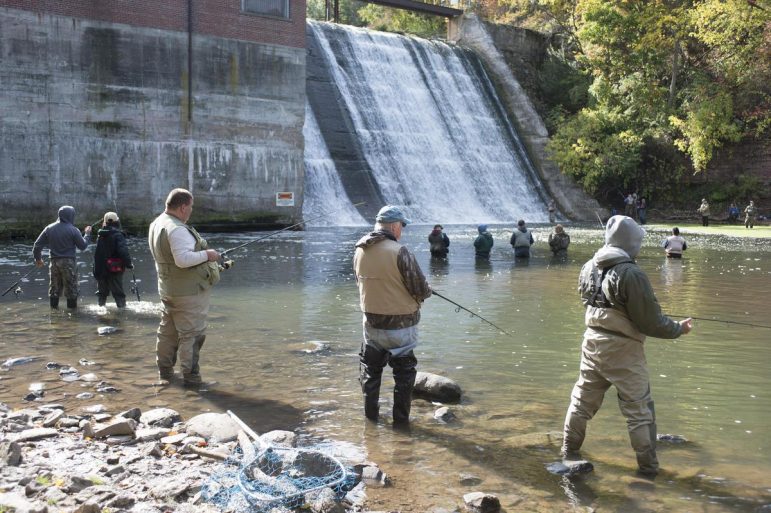 Eighteen Mile Creek, a Lake Ontario tributary, is so polluted that New York’s health department deems fish caught there to be unsafe to eat. In fact, the creek near the southwest corner of the lake is one of only six water bodies where the health department warns fishermen to not eat what they catch.

But the toxic hotspot hasn’t stopped the state and local governments from stocking the creek and promoting it as a fishing destination, Investigative Post reports.

The state Department of Environmental Conservation stocks Eighteen Mile Creek each year with an average of 160,000 of what are considered among the most desirable fish: salmon and trout. The DEC does this to promote recreational fishing, a $113 million industry for the Lake Ontario watershed.

Shirley Nicholas knows the creek’s toxic history. She was instrumental in getting the Environmental Protection Agency in 2012 to add Eighteen Mile Creek to its Superfund program. The bottom of the creek is laced with a number of toxins, including PCBs, which can cause cancer. The contamination is so bad that the EPA evacuated five families in 2015 and razed their homes on the edge of the creek in Lockport.

“This fishing industry is a multimillion dollar fishing industry. They don’t want to hurt it,” said Nicholas. “Those fish are contaminated. You eat them and you can get all sorts of diseases.”

The DEC defended its stocking program. Officials said the fish spend most of their lives in nearby Ontario Lake, only returning to spawn and die. Therefore there is only a slim chance of becoming contaminated.

“I’ve listened to their justification, it really doesn’t make any sense,” said Joe Gardella, a chemistry professor at the University at Buffalo and a lifelong fisherman.

“It just runs counter to what the Department of Health is trying to do on that creek which is stop people seeing it as a source of food. It seems to me that the DOH and the DEC need to get on the same page about this,” Gardella said.

Given the creek’s history, why would they want to promote fishing at the creek?

“The decision was made that we would pursue a goal of both protecting the public health but also encouraging beneficial uses of  both commercial and recreational fisheries. So we made a conscious decision not to prohibit recreational fishing as a consequence of chemical contamination,” said Steve LaPan, DEC’s Great Lakes Fisheries section head.

Some who fish from the Niagara County creek eat their catch. That includes fish not stocked by the DEC that have spent more time in the creek and are exposed longer to toxins. Others know better than to eat the fish.

“Never. Would not ever do it,” said Beau Brooks. Deterrents that keep him from fishing the creek include the terrible stench and the litter from old TVs and mattresses to plastic bottles and wrappers.

“Depending on the time of the year, the smell can get pretty overwhelming. Sewage-like would be the best description, just foul, like something like a hot sewer,” Brooks described.

There are other problems that concern fishermen. Fisherman’s Park by Burt Dam in Newfane attracts more than 10,000 visitors every year. According to a county survey published in 2008, EPA officials left shocked at how packed the park was considering the health department’s warning against eating any fish caught in the creek. The survey also says EPA officials were concerned about the lack of signs warning not to eat the fish.

Walking several miles of the creek, one can see about a dozen signs, but none directly advised against eating the fish. One of the few ways they can get this warning is if if they leaf through the state’s 80-page fishing guide. But Brooks said he didn’t find out from the state fishing guide.

“If my father hadn’t told me that the fish weren’t edible, I’d never have a clue.”