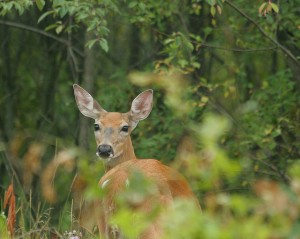 Those patterns could forecast an exceptional hunting season in the fall.

Brent Rudolph, deer and elk program leader for the Michigan Department of Natural Resources, said if mild temperatures and low snowfall persist through the rest of winter, deer populations could reproduce in greater numbers.

“The most critical time, in terms of having an impact on population, is early spring,” Rudolph said. “In the dead of winter, deer essentially hibernate on their feet. They only need enough energy to survive, but if they do survive in greater numbers, we could potentially see more fawns.”

Rudolph said the effect is limited to the U.P. since winters in the Lower Peninsula are not severe enough to significantly affect deer populations.

The past two winters also were mild in the U.P. As a result, does had more success birthing fawns in the spring.

“In a bad winter, does will preserve energy by reabsorbing their offspring, meaning they wouldn’t give birth to fawns they are carrying,” said Kristie Sitar, a DNR wildlife biologist in Newberry. “There would also be fewer multiple births in spring.”

To determine the effects of winter weather on wildlife populations, the department uses a measure called the winter severity index. It combines data on wind speed, temperature and precipitation to gauge whether conditions in a particular area are mild, moderate or severe.

However, U.P. deeryards have been depleted by years of overuse and lack enough resources to carry herds through severe winters, according to Sitar.

“These yards have been browsed-out for decades here in the eastern U.P.,” Sitar said. “There isn’t enough food available to support large populations, so starvation would be serious.”

Rudolph said higher temperatures and decreased snow cover mean deer may venture away from the yards to forage.

Not only can mild winters help deer feed but can also help keep deer off their predators’ menu.

Rolf Peterson, a professor at Michigan Technological University, said less snow cover allows deer a better chance of escaping those that would eat them.

“The wolf kill rate is usually higher when deer are facing deep snow, which tends to concentrate deer in predictable places like deeryards,” Peterson said. “There is some security in numbers for deer in yards, but wolves will have less trouble testing many deer, singling out the most vulnerable.

“In the second half of winter, crusts on the surface of the snow formed by freeze-thaw will often support wolves, and then they are not slowed down at all by the snow that imprisons deer,” Peterson said.

Michigan officials estimate there are 687 wolves in the U.P.

Terry McFadden, a wildlife biologist with the Michigan Department of Natural Resource’s Marquette Operations Service Center, said no matter what sort of weather comes between now and spring, he expects a substantial increase in deer populations and more incidents of deer damaging crops and property.

McFadden said nuisance deer have been a problem for farms in U.P. counties like Menominee, Iron, Alger, Dickinson, Delta and Marquette. He predicted an increase in the issuance of permits allowing landowners to hunt nuisance deer on their property.

Beyond issuing landowners permits, McFadden said local DNR offices are limited in what they can do to stop nuisance deer. Allowing more antlerless hunting or lengthening hunting seasons would be too broad a solution to help specific homeowners.

“There could be more incidents, but the only thing we can do is work with the individual landowners for now,” McFadden said.