Male walleye in the Saginaw Bay really need to start taking a cue from their female counterparts and hang out in a better neighborhood. 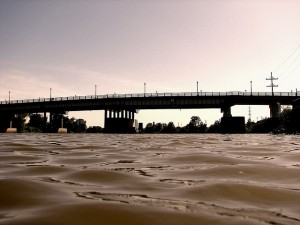 The Saginaw River holds much more chemicals than the bay. Photo: ifmuth (Flickr)

A study about to be published by the Journal of Great Lakes Research found male walleye contain three times more flame retardant chemicals than females. The chemicals, polybrominated diphenyl ether (PBDE’s), have been used in plastics, foams and fabrics as flame-retardants since the 1970’s. Animal tests suggest they could damage the liver, thyroid and brain, according to the EPA.

The reason: The males are hanging out in the wrong places.

“Males use the Saginaw River and its tributaries to feed in and for habitat, while the females mostly stay out in the bay,” said Charles Madenjian, a fisheries biologist with the U.S. Geological Survey and the study’s lead author.

The river has much higher levels of PBDE’s than the bay, Madenjian said. Once in the river, the chemicals are ingested by small fish that are eaten by the walleyes. Gobies and other small fish from the river had 10 times more PBDE’s than those dwelling in the bay.

But industries do not discharge PBDE’s into the Saginaw River, which means the chemicals are non-point source pollutants; draining from landfills and other waste sites. And it appears they stick in the river sediment.

“The Saginaw River is a large drainage basin,” said Rick Rediske, a professor at the Annis Water Resources Institute at Grand Valley State University, and study co-author.  “As these plastics get old and breakdown, the dust gets airborne and the river collects the pollutants.”

Since the area is heavily farmed, erosion worsens the river’s contamination, Rediske said.

While considered an emerging contaminant, PBDE’s are increasing in our waters and fish. They don’t appear to affect fish health, but, much like other obscure acronym chemicals, the risks to human aren’t fully understood.

“They’re like PCB’s (polychlorinated biphenyls) where there are over 200 different forms of the chemicals,” Rediske said. “We’re just starting to get a handle on impacts, and while there’s no human health standard, we’re starting to see that this could be a significant pollutant.”

Most humans are exposed to low levels of PBDE’s, usually through breathing in or eating them, according to the Agency for Toxic Substances and Disease Registry.

Fish aren’t the only route. Studies found PBDE’s in milk, cheese and beef, because cows can eat contaminated grass.

Great Lakes fish advisories do not include PBDE’s, but state agencies consider them an emerging contaminant.

Madenjian said researchers don’t know why the males spend so much time in the river. It’s not the first time male walleye have shown higher chemical levels than females.

A 2009 study showed Saginaw Bay male walleye with 2.5 times higher concentrations of PCB’s than females. And the findings were even more ominous as PCB levels were 15 times higher than the PBDE levels in the recent study.

This, too, was because males spent more time in the Saginaw River than females did. But industries used to spew PCB’s directly in the river, which makes the recent study all the more interesting, Rediske said.

“There is no industrial drainage of PBDE’s, it’s all atmospheric deposition,” Rediske said. “The Saginaw River really is a hotspot for its ability to collect sediments and pollutants from the outside environment.”