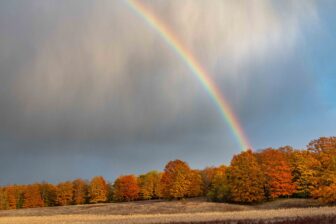 To help reach net zero carbon emissions by 2050, Michigan officials have created a 100,000 acre project in the Pigeon River Country State Forest that will sell carbon credits to businesses interested in offsetting emissions.

Through such programs, big businesses and corporations can buy credits to offset the impact of their emissions that contribute to global warming. One carbon credit equals 1 metric ton of carbon dioxide emission – that’s about the weight of a great white shark.

A similar program – the Wolverine-Copper Country project – is underway in Charlevoix and Emmet counties in northern Michigan and in Keweenaw County in the western U.P. On Keweenaw lands, it might cease harvesting altogether to allow trees to capture carbon as they grow, said David Price, a forest planning and operations manager at Michigan’s Department of Natural Resources.

In Charlevoix and Emmet counties, the focus is on restoring hardwood forests that have been severely impacted by the emerald ash borer and beech bark disease, he said.

The programs make up Michigan’s Big Wild Forest Carbon Project. The one in Pigeon River Country is the first in the nation on state lands, though similar projects in Michigan on private lands date back about a decade, Price said.

“It’s not going to reduce carbon emissions or increase sequestration by a single cubic centimeter and the DNR acknowledges that,” said Marvin Roberson, a forest ecologist with Michigan’s chapter of the Sierra Club.

Unless the forest landowner – in this case, Michigan’s Department of Natural Resources – is cutting harvest levels and increasing reforestation efforts as a result of the payments they receive, the program is meaningless, Roberson said.

The DNR’s website says the carbon project won’t adversely affect management and timber harvest levels from the forest, which concerns critics: carbon offsets only work if the landowner is doing things to sequester carbon beyond what the forest already does, Roberson said.

It’s called additionality, and is a requirement for a successful carbon offset project, according to a 2010 report by the Ecological Society of America.

After all, there’s no need to pay for something that would happen anyways.

A better approach is to simply cut emissions, Roberson said.

Instead of encouraging greener practices, offset programs allow business as usual in places often populated by marginalized groups of people, according to the Sierra Club Michigan Chapter.

Next year, a new forest management plan – which is revised every decade – will allow some trees in Pigeon River to grow longer and larger through big tree management practices, which offers further sequestration, Price said. At minimum, the state will harvest less than is grown.

The state doesn’t want to sell credits to a company that has no intentions of reducing its carbon footprint – and DTE Energy does, he said.

DTE officials say that by next year, the company will close 11 of 17 coal plants and replace them with a mix of sustainable energy sources and continue similar swaps in the future.

Additionally, the company aims to have net zero gas emissions by 2050 on a supplier and customer level, cutting its carbon emissions by 6 million metric tons each year, said Megan Tener, a marketing specialist at DTE Energy.

In the Pigeon River Country State Forest, DTE Energy is finalizing a nearly $18 million purchase of all the carbon credits for the first decade of the 40-year project, Price said. That will knock almost 1.5 million tons of carbon dioxide off the company’s total emissions.

How that money will be spent is yet to be determined. It’ll go into the state Forest Development Fund, which is generally responsible for forest management, Price said.

But is it sequestering any additional carbon from the atmosphere?

Roberson says no and that calling it a carbon sequestration project is dishonest.

As it stands, the state has made no changes to its forest management practices. Even though there are plans to let some trees grow longer, there has been no action and nothing is concrete, Roberson said.

“They’re big on giving the carbon credits but not very big on actually sequestering extra carbon,” he said.

The Department of Natural Resources acknowledges that the program isn’t intended to be a silver bullet solution. But, it helps companies achieve carbon goals while taking other actions to reduce emissions, Price said.

In addition to cutting emissions, managing bigger, older trees like white pines would be more effective at reducing carbon levels in the atmosphere, Roberson said.

White pines can grow to be 300 years old, but after 100 years growth starts to slow. Michigan harvests them at 100 years to grow them at the fastest rate possible, he said.

“It’s the economic way to go, but that’s 200 years of carbon sequestration we’re getting rid of,” Roberson said.

Even if the state allows some of the trees to grow longer – an extra 40 or 80 years – it still halves their carbon sequestering potential, he said.

In short, cutting emissions instead of trees is a sure way to reduce the carbon problem, he said.

“With any of these projects, the question is, will the payments to the landowner result in less harvesting?” Roberson said. “If the answer to that question is not yes resoundingly, then the project is meaningless.”