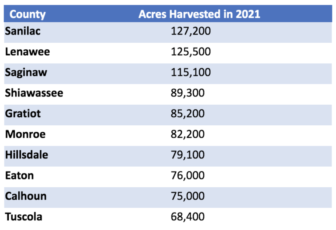 With a worldwide increase in need for food and oil, the soybean industry shows no signs of slowing down, according to Dave Williams, a fifth-generation farmer from Elsie.

“It’s upped our demand, and the U.S. soybean product is a desired product,” he said. “They know we are consistent in what we sell them.”

According to Michigan’s Department of Agriculture and Rural Development, soybeans are the top food export from the state.

Expanding consumer interest in plant-based foods as popular substitutes for meat could create more opportunities, said Janna Fritz, the CEO of the Michigan Soybean Association – but that hasn’t happened yet for the state’s growers.

“There’s so much more science and research being done to make protein alternatives taste good,” Fritz said. “But so far it has really not motivated an influx of consumer demand for plant-based protein, but hopefully it is something we will see.”

Williams said the many uses of soybean oil and meal have caused the steady call for more production.

A crop has to be planned and planted ahead of time, so it’s hard to say what the exact volume of product will be in demand each year, but Williams said he intends to plant additional soybeans this season.

One reason is the greater expense of growing other commodities, such as corn.

“Fertilizer prices are out of sight, and corn requires more fertilizer than soybeans, so that can make them more attractive,” Williams said.

High fertilizer prices aren’t the only factor though.

“Bio-diesel, renewable diesel and sustainable aviation fuel can all be manufactured from soybean oil, and that is something we have seen the latest increase in demand for,” she said.

While soybean oil won’t eliminate the use of petroleum or diesel fuels, it can be blended with them as a greener option for companies looking to reduce their carbon footprint, Fritz said.

“It’s definitely a greener option, definitely a carbon-reducing, greenhouse gas-reducing option. Not an eliminator but, yes, a more sustainable environmental practice,” she said.