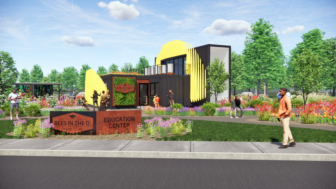 Bees in the D’s new pollination center is expected to increase the fruits and vegetables produced in Detroit community gardens.

The pollination center, breaking ground in April, will be home to roughly 100,000 honeybees in multiple hives, said Brian Peterson, co-founder and president of Bees in the D.

Placing hives within a three to five-mile radius of community gardens increases their vegetable and fruit production 10 times more than gardens without pollinators, Peterson said. In 2023 it will become an education center where people can learn about the bees and tour the hives.

Most of the food industry relies on pollinators like bees, Peterson said.

The insects pollinate one-third of the food we eat, according to The Bee Conservancy, a nonprofit organization.

“Detroit truly is a food desert,” Peterson. “Yeah it’s got great restaurants but it doesn’t have the food markets like most cities.”

He figures he can help fix that problem with bees.

“Bees are good, we need them, we want them.”

The plants and pollinators are the basis of the food pyramid, Peterson said.

Detroit is home to over 1,400 community gardens, according to Yes Magazine, an independent non-profit news organization.

“Each urban garden is developed for that particular community,” Perales said.

The center is located in Core City, a Detroit neighborhood with a high level of urban gardens, Peterson said.

In a recent study, Southwest Detroit Environmental Vision partnered with the University of Detroit Mercy and Trio/Upward Bound students from Detroit high schools. They studied the relationship between pollinator population and different types of produce. They found tomatoes and marigolds brought the most pollinators, Perales said.

“I think the urban gardening movement in Detroit can influence how other communities approach gardening,” Perales said.

Bees in the D has nearly 200 hives across southeast Michigan, and it hopes that communities implement more pollinators into their gardens, Peterson said.