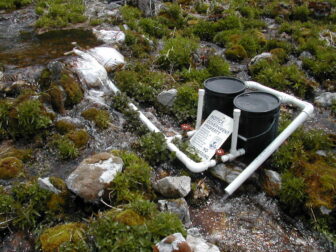 As several groups of researchers race to bring back Great Lakes grayling, one program recently got a big assist with a $70,000 grant.

The project hopes to find the best design for an incubator to produce the fish that hasn’t been in Michigan waters since 1936. It is part of a multi-step effort by the Michigan Arctic Grayling Initiative, a collaboration of more than 40 partners to make the fish self-sustaining in the Great Lakes.

The grant will be used to evaluate the success of remote site incubators, according to the Department of Natural Resources. They are testing the alternative to hatcheries, which spawn and raise fish in artificial environments.

Instead of using hatcheries, remote site incubators hatch eggs streamside and allow fish to move directly into the water, according to research conducted by Alan J. Mock, a researcher for the Annis Water Resources Institute at Grand Valley State University.

Hatcheries are commonly used for supplementing wild fish stocks but can lead to lower reproductive success and survival rates, according to his research.

Raising fish under more natural conditions could allow them to better acclimate and improve the survival rate after release, according to Mock’s research

The Arctic grayling was the only abundant stream fish in the salmon family present in the Lower Peninsula until the 1930s. 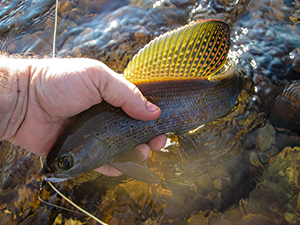 But logging, overfishing and the introduction of more competitive trout species led to the decline of grayling. The last fish on record in Michigan was taken in 1936, according to data from the state resource agency.

Past attempts to reintroduce grayling in Michigan included stocking hatchery-reared fish into lakes and streams from the late 1800’s through the 1980’s, according to the department’s website.

“With their partnership we are able to get closer to meeting our goals and seeing success,” Dexter said.

The first Consumer’s grant created a system for rating Michigan stream habitats and their compatibility for grayling. The Manistee River watershed was chosen as the first site for reintroduction.

Similar research involving Grayling is being conducted right now in Canadian streams by Heather Veilleux, a researcher at the University of Alberta.

The project looks at eDNA, or genetic material that’s shed into the environment, Veilleux said.

“Any living organism has DNA and it’s shed into the water or the air or the soil,” Veilleux said. “The idea with eDNA, especially in the aquatic realm, is to be able to take a scoop of the water and pick out the part of the DNA that you’re looking for in that species.

Veilleux said her research tested eDNA in streams to identify juvenile grayling, which are harder to find by traditional methods.

She hopes to use her data to find where grayling spawn and bring more eggs to those areas.

The Michigan initiative also hopes to increase juvenile populations but is basing the new project on remote site incubator designs that worked for grayling in Montana.

Their success is less certain in Michigan streams, according to the DNR.

But Grand Valley State University conducted similar research with Michigan rainbow  trout in 2018, according to Mock’s research. Researchers were concerned that sandy Midwest streams would hinder survival rates in incubators.

The different types of incubators didn’t affect performance, and the hatching success rate in Michigan was similar to Montana. The overall survival rate for rainbow trout was 41.3% in 2018 and 52.4% in 2019, compared to 45% for Montana’s grayling eggs.

“Changes in temperature, salinity, contaminants and habitat fragmentation, like when culverts are constructed, all affect them,” she said. “And they’re listed as a species of special concern under Alberta Wildlife Acts.”