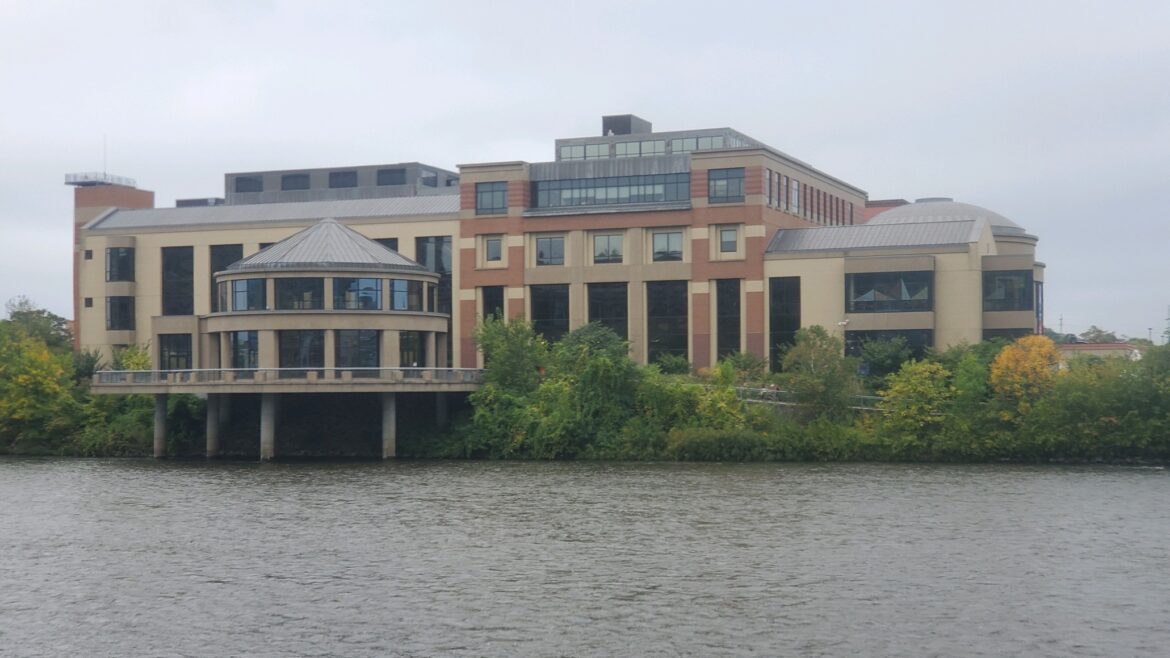 The Grand Rapids Public Museum on the west bank of the Grand River will reconfigure its waterfront to help restore the rapids. Image: Kristia Postema

Grand Rapids, Michigan, was once known for its roaring rapids that are no longer.

After nearly a century and a half, river restoration projects may bring back the “grand rapids” that once characterized the city and provide environmental and economic boosts to the city

Dale Robertson, the president and chief executive officer of the Grand Rapids Public Museum, said the idea of restoring the rapids has been contemplated for a while, but it is finally in motion.

“The restore the rapids project is a fairly recent addition to the city plan called the “GR Forward Master Plan,” Robertson said. “The plan includes restoring the rapids, right within the river, but also changes on the banks of the river.”

Robertson said the museum and many other waterfront properties plan to reconfigure their waterfront to pull the banks away from the river. That could help mitigate some of the high water level and flooding, he said.

At 252 miles, the Grand is the state’s longest river, flowing from Somerset Township in Hillsdale County to Lake Michigan at Grand Haven. In addition to Grand Rapids, it passes through Lansing

Robertson said pulling the banks back will allow the public to experience the river in new ways.

“More importantly, we will be allowing routine and regular access to the river itself,” he said.

Robertson said the Grand Rapids Public Museum will educate and inform the public about the project.

“We’re located right on the west bank of the Grand River, so we were designated to be that source for education and interpretation, not only of the project itself, but more importantly water systems and the history and culture of the Grand River,” Robertson said.

In the 1800s, the Grand River was used as a “commerce waterway” so the city created dams to safely transport wood and other materials for furniture building, Robertson said.

Jay Steffen, the assistant planning director for the Grand Rapids Development Center, said restoration of the rapids will have environmental and economic benefits.

“The benefits fall into what I would consider to be three buckets,” Steffen said. “We have environmental, economic and equity benefits. We’ve got an entire program just focused on the equity rate related to the river. 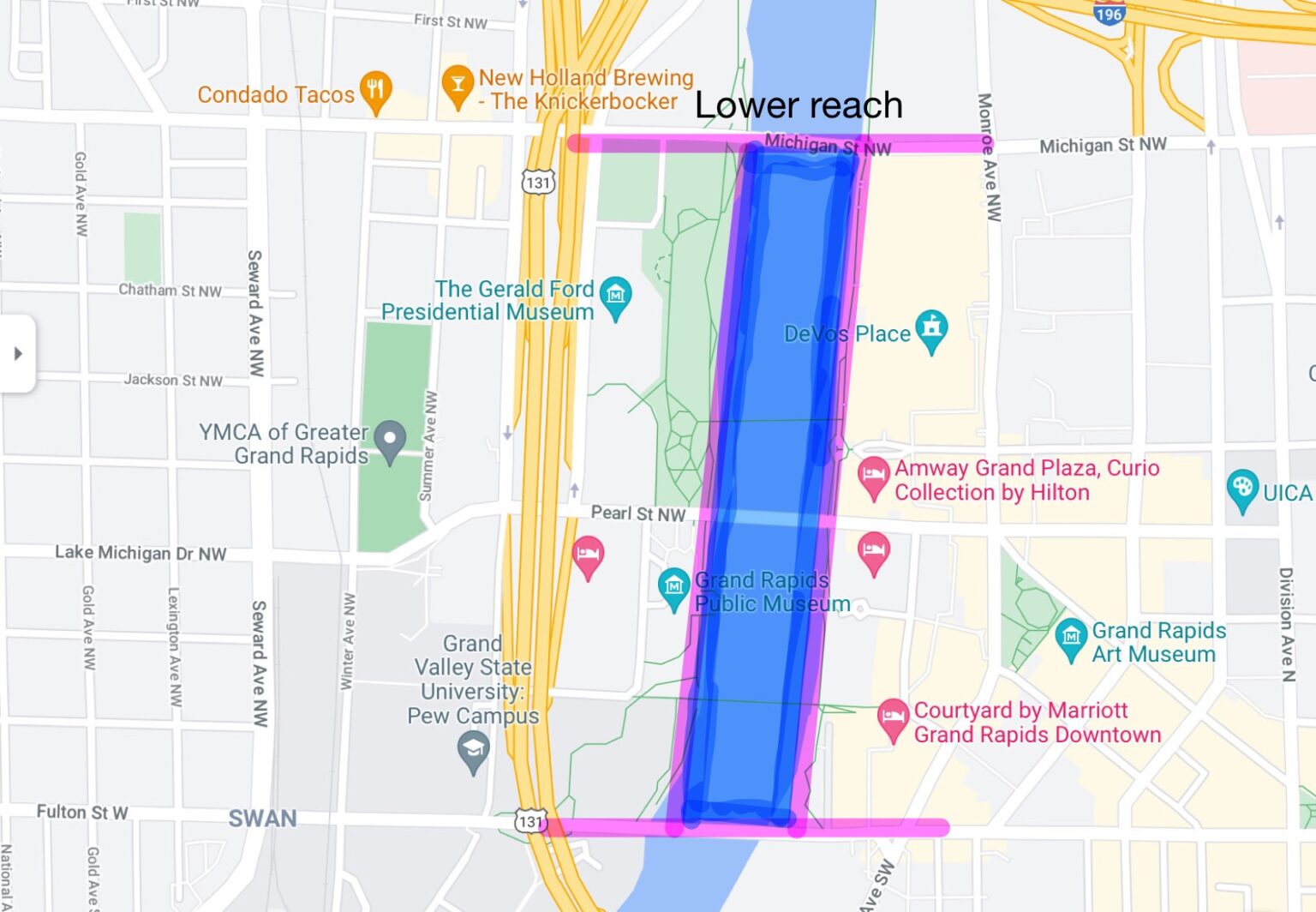 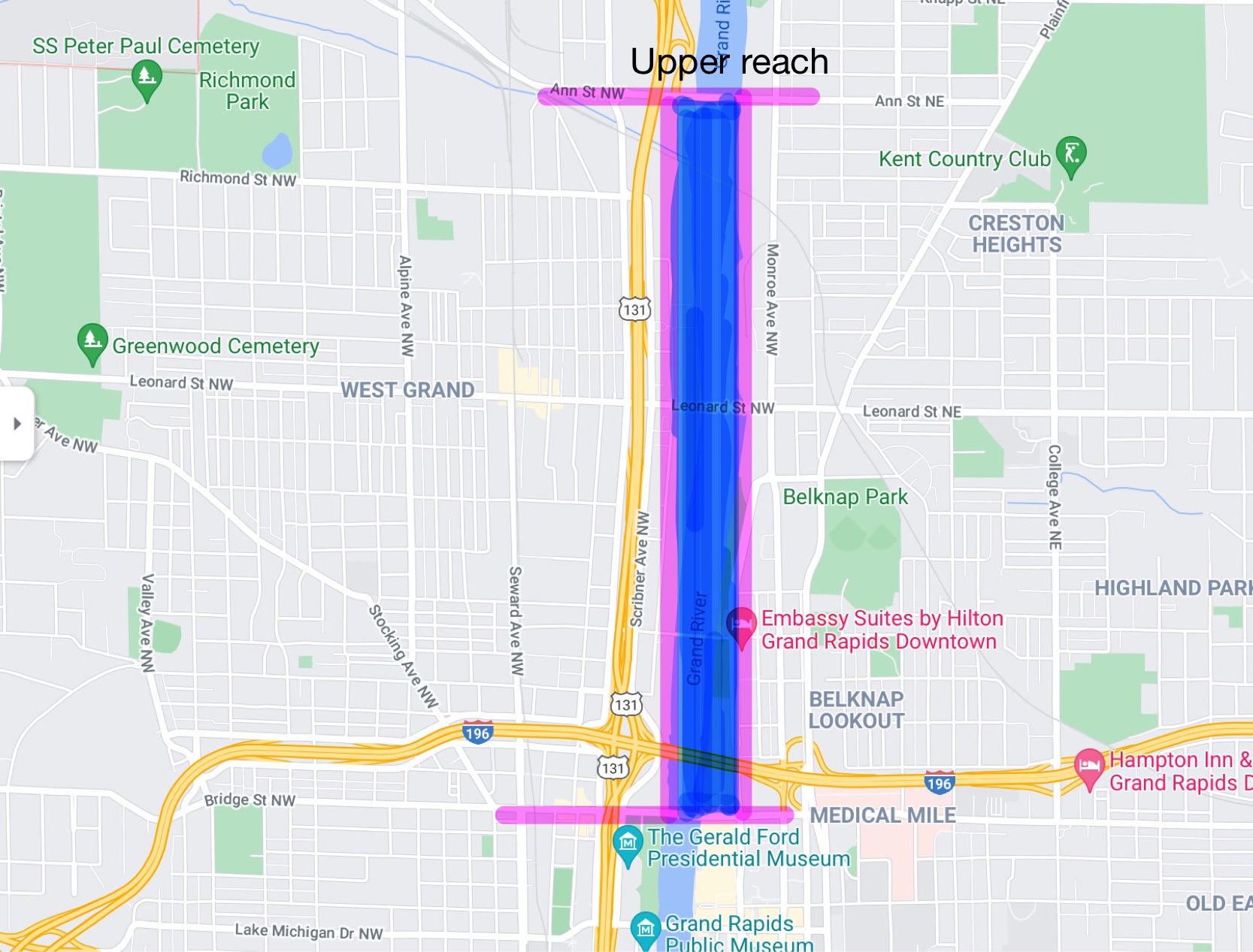 The Lower and Upper river plans for the Restore the Rapids Project, created by Kristia Postema. Images: Google Maps

“One reason for restoring the rapids is because it will provide better habitats for fish, mussels and other creatures that live in the Grand River,” Steffen said. “It’ll also provide for better fish passage.”

Upon completion of the entire project, an additional 80 acres of prime habitat for native fish, such as the endangered lake sturgeon, will be created, Steffen said.

Additionally, snuffbox mussels are another endangered species that Steffen predicts the restoration project will help.

“The river restoration project would provide better habitat for not only this federally endangered mussel, but also other mussels as well,” he said.

As for economic impact, Steffen said studies have shown that the project will boost the outdoor recreation economy immensely.

“It’s somewhere between $15 and $20 million per year of economic benefit just related to recreation,” he said. “It would include recreation related sales of fishing gear, kayaks, canoes and anything that would be outdoor and water recreation-related.”

Steffen said the equity aspect of the project focuses on not only access to the water, but also “financial success and financial equity for anybody who wants to benefit economically from, for example, development along the river.”

“Whitewater projects can also create a situation where native fish have trouble moving up river,” O’Keefe said. “There’s also the potential environmental pros and cons of the impact on native non-jumping fish.”

According to O’Keefe, restoring the rapids in a way that is good for the environment will take time and careful planning.

“The current plan has been broken into two phases,” O’Keefe said. “The first phase would deal with the area downstream of Sixth Street dam.”

The plan is to remove the Sixth Street dam and change the river through downtown, including alteration or removal of cofferdams, he said.

According to O’Keefe, “when you look at the pros and cons of what is proposed for the Sixth Street dam, you get into a lot more complications with potential environmental pros and cons.”

O’Keefe said that plan proposes altering the current structure of the Sixth Street dam and building another barrier upstream by Ann Street.

“This river has been altered for a very long time,” he said. “The idea is to make it more similar to what the rapids might have been like, but I don’t think anyone’s claiming that we’re going to actually have the same thing that we had before.”