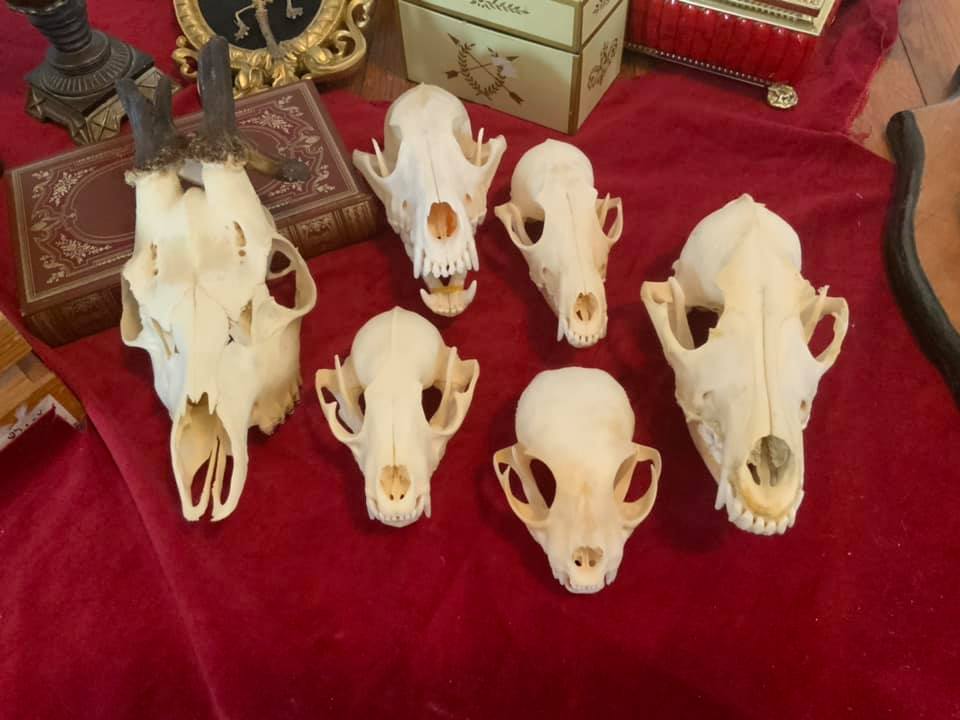 And possibly a prison cell.

That’s what federal authorities have unraveled, leading to the arrest of a Montreal shop owner on charges of illegally trafficking in wildlife parts and sending them from Canada into the United States.

The defendant, Vanessa Rondeau, operates the Old Cavern Boutique in Montreal, a store that sells “a variety of unique curiosity and oddity items, many composed in whole or in part from wildlife,” the U.S. Attorney’s Office in Buffalo said in a statement.

The shop’s Facebook page says, “We specialize in online sales of antiquities, vintage objects and taxidermy.”

Rondeau faces charges of smuggling, wildlife trafficking and false labeling with a maximum possible sentence of 20 years in prison and a $250,000 fine. She is free on $50,000 bail and is scheduled for a June 15 court appearance in Buffalo.

After an inquiry from Great Lakes Echo, Rondeau said in a Facebook response, “I can’t talk about anything linked to the case until it is resolved.”

She also posted a message on the store’s Facebook account to customers, saying, “Not everything we see in the media or social network are accurate.”

As of June 3, the store’s Facebook page still advertised skulls for sale, including ones from black bear, deer, raccoon, fisher, weasel, hedgehog, cat, moose and “deformed coyote,” with photos.

Here’s what happened, according to the U.S. Attorney’s Office and court documents.

A U.S. Fish & Wildlife Service investigator examined the shop’s Facebook page and found “numerous wildlife items for sale, many of which are protected under federal laws,” including the Endangered Species Act, Migratory Bird Protection Act and Marine Mammal Protection Act, the statement said.

The formal charges relate only to polar bear skulls, but an affidavit by the Fish & Wildlife Service special agent, Ryan Bessey, details far more extensive trafficking in and smuggling of wildlife parts. More charges could be added if a federal grand jury issues an indictment or as part of a plea deal.

“An international oddities and curiosities market exists in which unique and often rare items are sought by collectors. In particular, skulls, both human and animal are in high demand to oddities collectors. Typically, the rarer the species, the more valuable and sought after a skull becomes,” Bessey wrote in the affidavit. 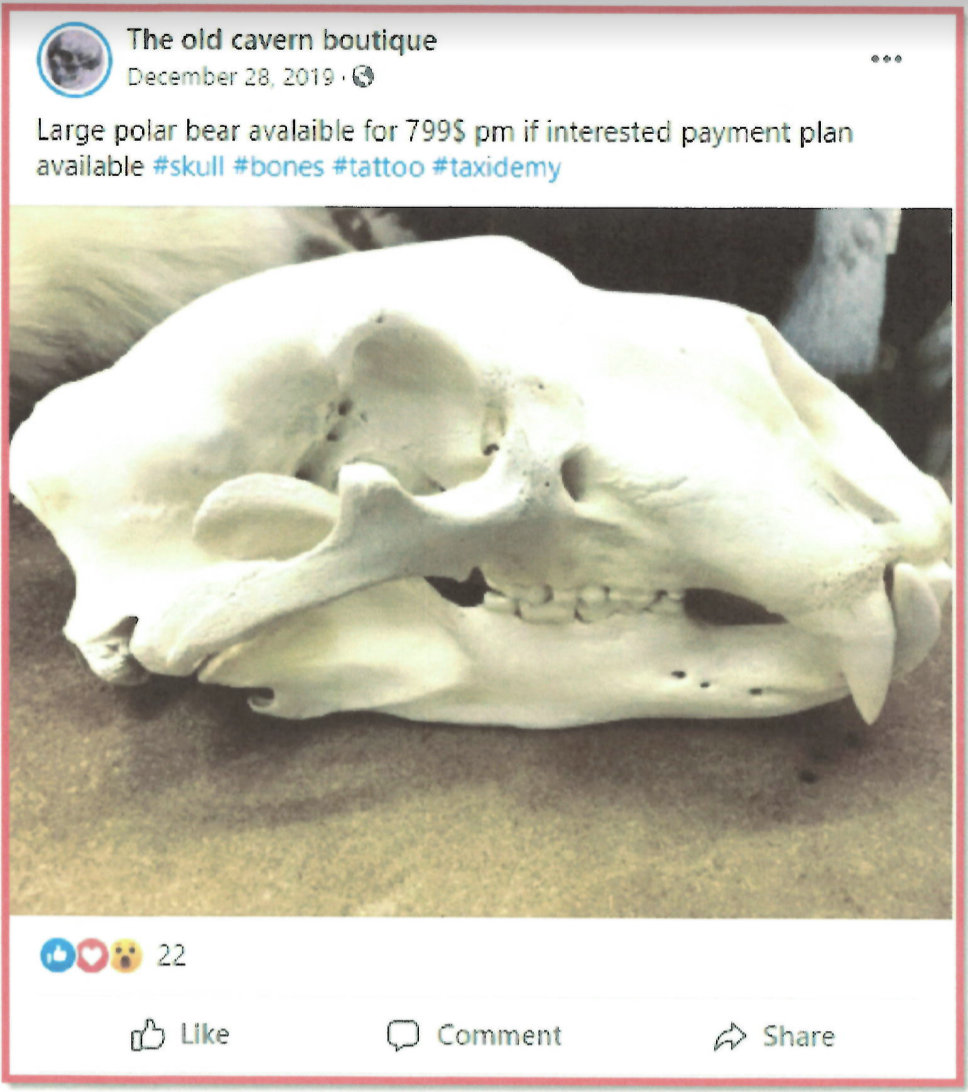 In 2019, Rondeau allegedly posted offers to sell two polar bear skulls, one for $685, including $35 for shipping to Buffalo, and the other for $799. Bessey, who saw the postings, said in the affidavit that he ordered both of them.

Also in 2019, authorities say, Rondeau advertised for sale a $325 taxidermy-mounted crow. Her Facebook ad told potential buyers to send a private message if interested. Bessey, acting in a “covert capacity,” responded and asked about “any problems shipping ‘these things’ to the United States because it might be a “protected species,” the U.S. Attorney’s statement said.

“Rondeau replied that she has never had a problem and explained, ‘I label them as art piece,’” it said.

Customs and Border Protection agents intercepted the package, which was mailed to the United States, labeled as “gift” and falsely described as “cadre,” the French word for frame.

In his affidavit, Bessey said, “Wildlife traffickers do not specifically identify the true contents in a package. Instead, they will falsely label packages containing illegal wildlife as unassuming objects to avoid detection from law enforcement.”

The affidavit also said Rondeau entered the U.S. 18 times between December 2018 and September 2019, 12 of those times between midnight and 2 a.m. One visit lasted less than an hour, and another about seven hours.

Bessey said wildlife traffickers sometimes use shipping companies and post office boxes near international borders to receive illegal wildlife, then smuggle them across the border in a vehicle. 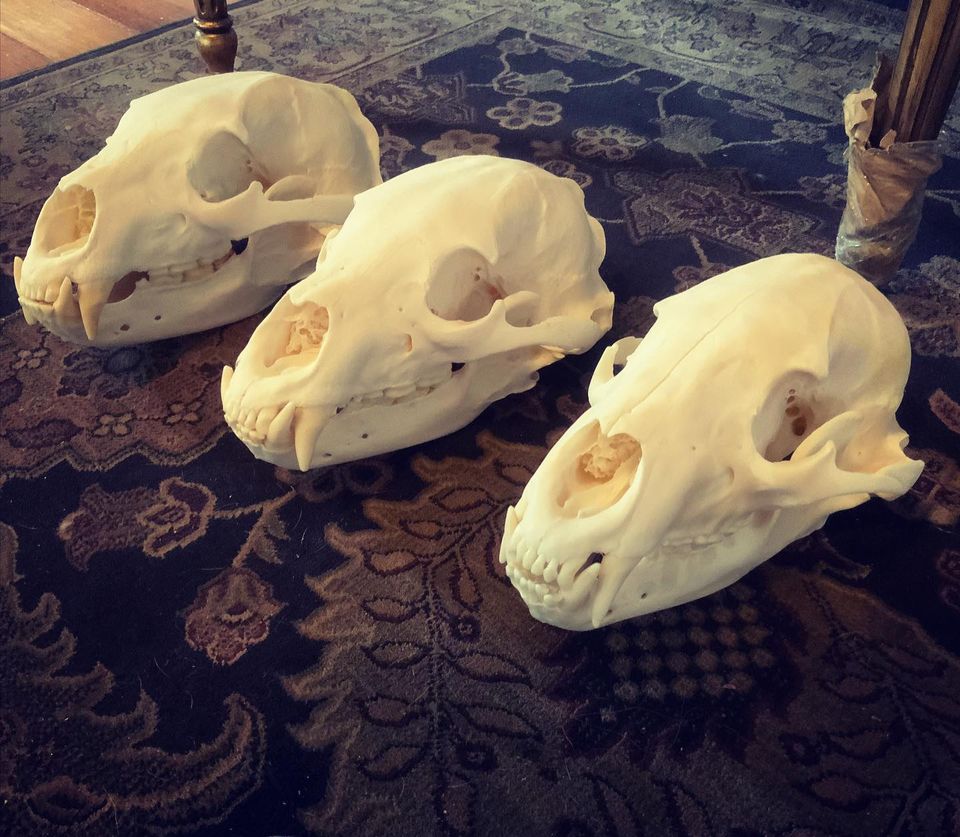 “Short trips into the United States, at late hours, such as those by Rondeau, meet border-crossing characteristics seen used by other wildlife traffickers,” his affidavit said.

The affidavit said Rondeau received more than 880 PayPal payments from the U.S., including about 51 transactions totaling more than $5,600 that were identified as being for wildlife, wildlife parts or wildlife products.

In addition, the affidavit said Rondeau, who was under surveillance, flew from Montreal to Florida on May 15 and attempted to smuggle “numerous undeclared wildlife items” from the U.S. into Canada on May 26, but wasn’t allowed to cross from Vermont into Canada because she didn’t have proof of a recent negative Covid-19 test.

Environment and Climate Change Canada media relations officer Brandon Clim said he could not comment on ongoing investigations but “we can confirm that no charges under federal Canadian wildlife legislation have been laid against this individual at this point in time.”

Clim said the agency ’s Enforcement Branch closely cooperates with U.S. and other international authorities “to ensure that our enforcement efforts are maximized to the greatest effect.”

One thought on “Skullduggery at the border: Feds crack skull-smuggling operation”