The same pandemic that restricts travel and manufacturing is having a measurable impact on decreasing air pollution in parts of the Great Lakes region, experts say.

It is an impact that scientists can detect with sensors mounted on NASA satellites and that measure nitrogen dioxide, a pollutant that can exacerbate human respiratory problems such as asthma, cause acid rain and speed the creation of ozone and the pace of climate change.

It’s a tricky impact to measure, experts say. Weather, wildfires and other sources of pollution can mask the air quality effect of an economic lockdown. And clean air gains were reported before the pandemic. The Allegheny County Health Department in Pennsylvania reported that in 2019, nitrogen dioxide levels in Pittsburgh had dropped every year since 1999.

Nitrogen dioxide “is created at really high temperatures,” said Catherine Asselin, senior environmental engineer at the Michigan Department of Environment, Great Lakes and Energy. “That could be (in) cars, but it could also be (in) a stationary engine or a turbine at a facility. Anything that has a high temperature could create it.”

The impact is not uniform.

The average total of nitrogen dioxide emissions tracked in the air above Michigan’s Upper Peninsula from March 1 to Oct. 31 of 2019 and 2020 is nearly the same, according to NASA datasets.

“The highest areas for NO2 are expressways which really don’t exist in the U.P. like they do down here in Detroit,” Robinson said. “There’s not the congestion and the stop-and-go traffic that there is in the Detroit area, or Lansing or Grand Rapids. The traffic jam situation is what elevates numbers, but you don’t really get that in the U.P.”

Other complicating factors: The U.P. industries were less hard hit by the shutdown and the wildfires to the west and in Canada this year could have caused emissions to seem higher, she said.

Elsewhere the impact is dramatic.

Ground detection sites in the Minneapolis/St. Paul metropolitan area detected a 15% to 25% decrease in nitrogen dioxide pollution between April and November from last year to this year, according to the Minnesota Pollution Control Agency.

The drop is likely due to anthropogenic sources – car exhaust, power generation, industrial combustion – dropping with the shutdown, said Jesse Berman, a professor at the University of Minnesota who studies how air pollution harms public health.

Whether that has any impact on human health is unclear.

“It’s too early to tell,” said Daniel Dix, a risk evaluation supervisor at the state pollution control agency. “There is obviously nothing to celebrate.”

The NASA satellite readings taken hundreds of miles above the earth don’t show as drastic of change as that detected by the ground level monitors, Dix said. Nitrogen dioxide is a better measure of impact because ozone, small particulate matter, carbon dioxide and other substances are more susceptible to weather and outside factors. 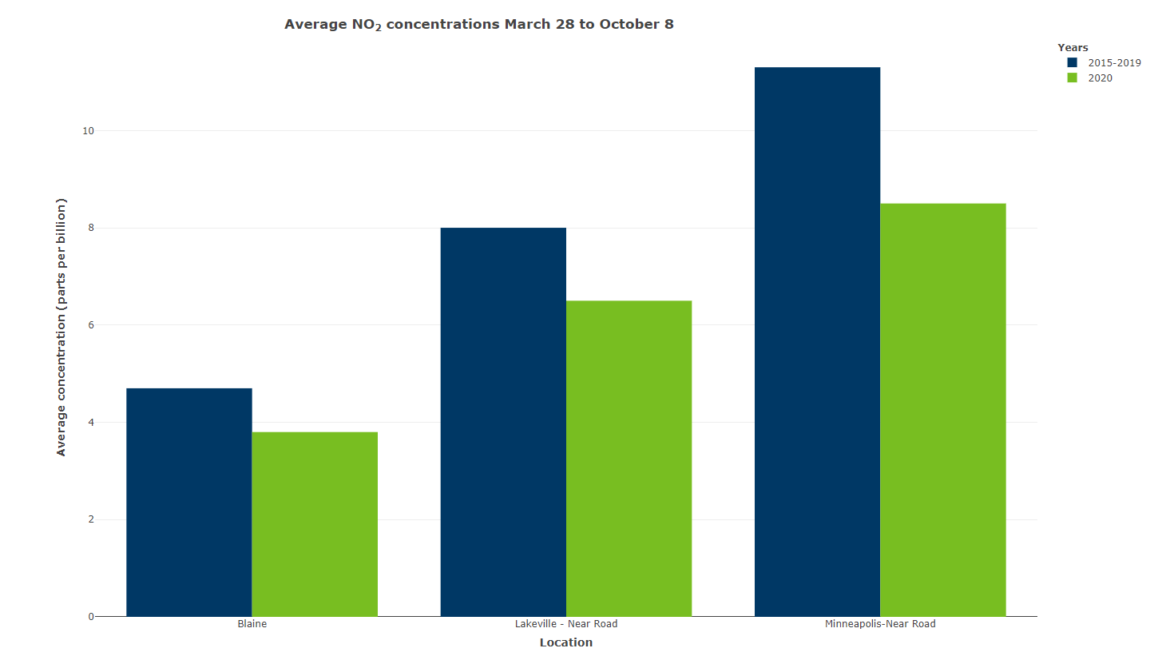 Along I-90 near Buffalo, the decline is attributed to a drop in passenger vehicle traffic, but it is offset somewhat because commercial trucking traffic did not decrease as much, said Kevin Frazer of the New York Department of Environmental Conservation.

And commercial trucking emits 10 times as much nitrogen oxide as cars do, he said.

The American Lung Association gave Cuyahoga County, which includes Cleveland, an F for too many days with high ozone between 2016 and 2018. But the NASA satellite imagery shows a drop of nitrogen dioxide which can contribute to that problem between 2019 and 2020.

But the pandemic represents the first time there has been a significant change in driving behavior, Neuhaus said.

Drag image to show Cleveland and then use slider to compare pre-Covid and Covid years.

But experts warn that measuring nitrogen dioxide can sometimes be misleading.

“Broadly speaking, we know these changes were due to COVID-19 (lockdown), but there are other factors that could’ve been in play as well,” said Ana Prados, a NASA research associate professor. “In the case of air pollution, pre- and post-COVID-19, that pollution is not necessarily on the surface.”

She notes that you can’t assume that the pollution in the images is directly affecting people.

Drag image to show Chicago and then use slider to compare pre-Covid and Covid years.

In Milwaukee, small emission differences were detected at near-road sites but not elsewhere, said Katie Praedel, the air monitoring section chief for the Wisconsin Department of Natural Resources.

“The passenger car traffic did decrease because people were home,” Praedel said. “But for our region, I don’t necessarily believe that truck traffic decreased because it’s a shipping thoroughfare and when people were home, they were having more things shipped.

“Each state is finding that (nitrogen dioxide) decreased at their near-road sites, but it’s such a long history of monitoring that for it to impact long-term, or even over the course of a year, you would have to take a lot more cars off the road,” Praedel said.

Drag image to show Milwaukee and then use slider to compare pre-Covid and Covid years.

Canadians in the Great Lakes region saw similar reductions as they battled the pandemic.

Researchers there discovered that nitrogen dioxide dropped when Ontario declared a state of emergency to curb the spread of COVID-19 and people spent more time at home and less time driving.

Drag image to show Toronto and then use slider to compare pre-Covid and Covid years.