Those activities violate the 1973 Endangered Species Act, which makes it illegal to “take” – including behavior that “harasses, harms or wounds” – a protected species, U.S. District Judge Richard Young ruled.

Young permanently prohibited the nonprofit Wildlife in Need (WIN), which denies any wrongdoing, from declawing its Big Cats and from prematurely separating cubs from their mothers.

The decision sets the stage for transferring the Big Cats to “reputable sanctuaries,” said Brittany Peet, the deputy general counsel for captive animal law enforcement at the People for the Ethical Treatment of Animal (PETA) Foundation. 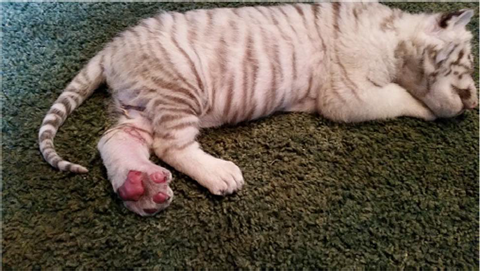 Tiger cub after declawing. Image: People for the Ethical Treatment of Animals

Meanwhile, on Aug. 28, a state court judge ordered the appointment of temporary  custodians to take custody of all the other animals at WIN to ensure their  health and welfare. That ruling by Marion County Circuit Judge David Dreyer came in a separate suit filed by the Indiana attorney general.

The state attorney general’s civil suit seeks to dissolve WIN, liquidate its assets and  transfer all its animals to court-approved animal sanctuaries.

PETA filed the federal suit in 2017 against WIN, its president Timothy Stark and its former secretary-treasurer, Melisa Stark.

“All I can say is that it is total bullshit,” Stark said. He accused PETA and the state attorney general of unfairly targeting him. 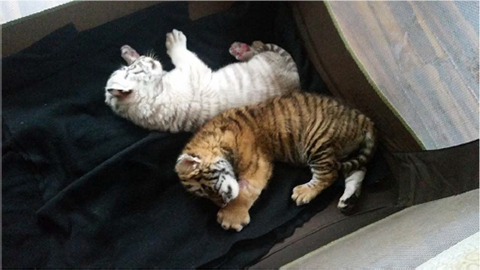 On its website, WIN describes itself as “dedicated to the rehabilitation & release of indigenous wildlife & provision of safe harbor to an array of exotic & endangered species.”

The zoo is no longer operating because it lost its U.S. Department of Agriculture license in February, but most of its animals are still there, Peet said.

The WIN website says it closed last March but is reopening for interactive sessions as soon as it can.

Young’s Aug. 3 decision includes graphic details and photos of what some of WIN’s Big Cats underwent and quoted Stark as saying he declaws Big Cats to make them easier to handle, not for medical reasons.

Declawing is a surgical procedure to amputate the last bone, or knuckle, of a Big Cat’s toe.

Peet said, “It’s not like clipping a cat’s nails.”

In his decision, Young wrote, “During the procedure, the Big Cat’s bone, tendons, nerves, litigants and blood vessels are severed. This can cause pain and impair a Big Cat’s ability to engage in normal behaviors, such as walking, climbing or scratching.” 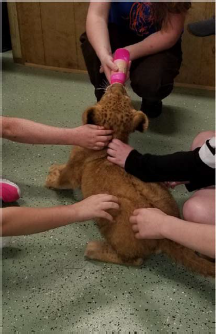 Visitors petting a cub during Tiger Baby Playtime. Image: People for the Ethical Treatment of Animals

The decision said the zoo’s veterinarians didn’t perform the procedures at surgical sites, failed to prescribe pain medication after declawings and failed to provide post-surgical care. Two cubs died, “likely as a result of the declawing procedure,” it said, and others “suffered from swollen paws and long-term effects.”

Peet said one of those veterinarians settled a separate PETA lawsuit against him by acknowledging that declawing of endangered cats violates the Endangered Species Act. He also agreed to stop providing veterinary care for Big Cats.

PETA presented evidence that WIN had separated at least 35 cubs from their mothers to show them during an exhibition called Tiger Baby Playtime, the court ruling said.

“During Tiger Baby Playtime, they cannot sleep – often forced to interact with the public, they eat in an extremely stressful environment, sometimes in an unnatural position, and they cannot escape the public touching and petting them,” Young wrote. “Such conduct constitutes harassment because it creates a likelihood of injury to Big Cat cubs by annoying them to such an extent as to significantly disrupt normal behavior patterns.”

In addition to prematurely separating its own cubs from their mothers, WIN received cubs, some less than a week old, from an exhibiter in Oklahoma. Young wrote, “Though Stark did not physically separate these cubs, he hosted Tiger Baby Playtime, which created a demand for young cubs.”

PETA’s Peet said, the United States has a Big Cat overpopulation because exhibitors like WIN can use cubs for only a few months and, therefore, “need a constant supply of cubs to keep the money flowing.”

In a court filing, WIN describes PETA as “a radical, extreme, militant, activist animal rights group cloaked as a nonprofit organization to bully, harass, annoy and to bring litigation under the Endangered Species Act to further its efforts to fundraise from members of the public. PETA advances frivolous claims to fund further litigation to accomplish what appears to be the goal of ending private ownership of all animals, including typical household pets.”

The WIN website criticizes “animal rights activists,” saying, “Their paradigm is to end all interaction between animals and humans, including your pets, and when the opportunities to play began spreading, they used their amassed wealth and our legal system to try and stop it.”

Stark said he started the zoo because it’s “been my dream ever since I was a little kid. I’m the only person in the industry who gives animals away. I sold a few in the past here and there, but never sold a Big Cat. I don’t sell my animals. I just give them away.”

He said WIN has never been a traditional zoo where visitors walk around and look at the animals. Rather, he continued, “We just had special events all the time.”

As for PETA, he said, “They can make a simple lawsuit drag out for years and cost people like me hundreds of thousands of dollars, if not millions of dollars. They’re nothing but bullies.”