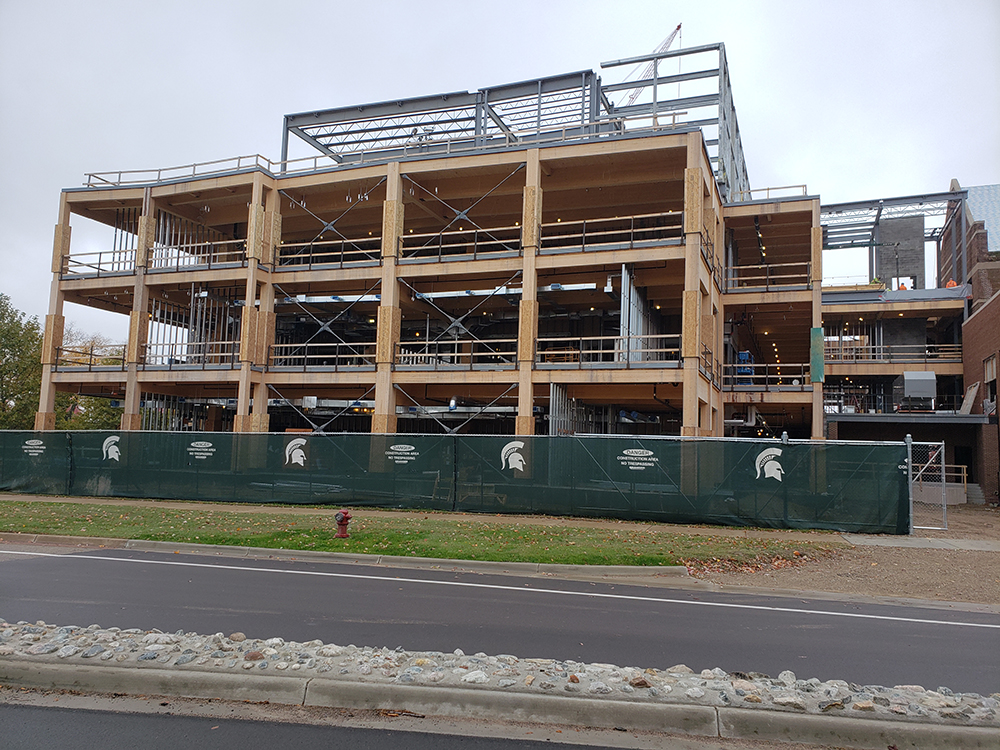 Michigan State University’s STEM Teaching and Learning Facility, the first of its kind in Michigan, is built with mass timber – large, older trees that continue to store the carbon they’ve accumulated rather than release it as a greenhouse gas. Image: David Poulson

Michigan’s 3.9 million acres of state forests could be recruited for a fight to limit climate change by storing carbon emissions.

“Climate change, when you slow everything down, it’s a math problem,” said Daniel Eichinger, the director of the Department of Natural Resources. “We are contributing a lot more carbon into the atmosphere than we are able to sequester, consume and store.”

Sequestering carbon dioxide, a greenhouse gas contributing to global warming, refers to storing it in some manner.  Michigan’s state forests, some of the largest in the nation, have plenty of room to store carbon.

But foresters traditionally focus on maximizing an adequate and stable supply of timber and fiber and to provide wildlife habitat, Eichinger said.

The potential for storing carbon could become a third central value, he said.

That amounts to planting more trees because younger trees have more carbon storage potential, said Ed Golder, a public information officer for the DNR. Older trees have already stored most of the carbon they ever will.

But some forestry experts are concerned the new emphasis might somehow come with restrictions on harvesting the forest.

“We don’t see any reason to be alarmed,” Robbins said. “Although it can get sticky if they start putting restrictions on there that you can’t manage the timber.”

“I love to plant trees. I think it’s great,” said McBroom, who chairs the House Natural Resources Committee and whose Upper Peninsula district encompasses Copper Country and Escanaba River state forests. “But I also don’t want us to get into any sort of position where we don’t recognize that trees need to be harvested eventually.”

Another way carbon sequestration is maximized is by using timber from older trees to construct buildings, Eichinger said. That way, the carbon stored in them can stay for as long as the building stands.

“We should be doing a lot more when it comes to building with wood. Michigan Technological University up here in the Upper Peninsula is doing some tremendous work on large scale wood buildings,” McBroom said. “If there’s a benefit in continuing to sequester the carbon, that’s an added bonus”

Storing carbon in forests could grant the state access to the carbon credit market, Golder said.

These markets allow companies that emit greenhouse gases to buy credits from places that store carbon in an effort to be more environmentally friendly. In this case the state would sell the carbon storing capacity of trees on state forests to companies that need to reduce their emissions.

California runs a regulated cap and trade program now, but it is largely filled up and difficult to access, Golder said.

The California program is regulated with specific caps for polluters, he said. A cap and trade program is more robust than a voluntary market.

“What we were thinking of doing is getting ourselves well-positioned, anticipating there probably will be some sort of a national carbon tax or cap and trade system put in place within the next two years,” Golder said.

The department is eyeing a company like Bluesource, a California carbon marketing company, to assess and market the credits. Others are already moving ahead.

The Nature Conservancy in Michigan is finalizing an assessment from Bluesource to gain  revenue from the carbon storage potential in more than 6,000 acres of its Wilderness Lakes Reserve in the Upper Peninsula, said Richard Bowman, the association’s director of working lands.

Voluntary carbon credit markets work, just not as quickly as their regulated counterparts, he said.

But for the scale of Michigan’s state forests, a regulated carbon market may be necessary to generate the environmental benefit state officials desire.

“Absent some sort of mechanism to force that transaction, it would probably take a long time to utilize the carbon that’s being sequestered in the state forest system to offset that many emissions,” Bowman said.

“I’m opposed to any sort of mandate from a government that would force somebody to go to this marketplace,”  McBroom said. “As long as it remains a free-will thing, that’s a-okay with me.”

Still, the benefit for the state government to begin managing state forests in this way has an immense environmental benefit, Bowman said.

“What we don’t want to lose in all of this is that managing forests in a sustainable way that they both produce an ongoing supply of timber and wood fiber for human needs, but they are also managed in a way that sequesters carbon, is one of the really positive things that we can do to try to offset emissions,” Bowman said.

“We’re going to need to do everything we can think of to offset emissions,” he said.

One thought on “Plant trees, store carbon, save the environment”