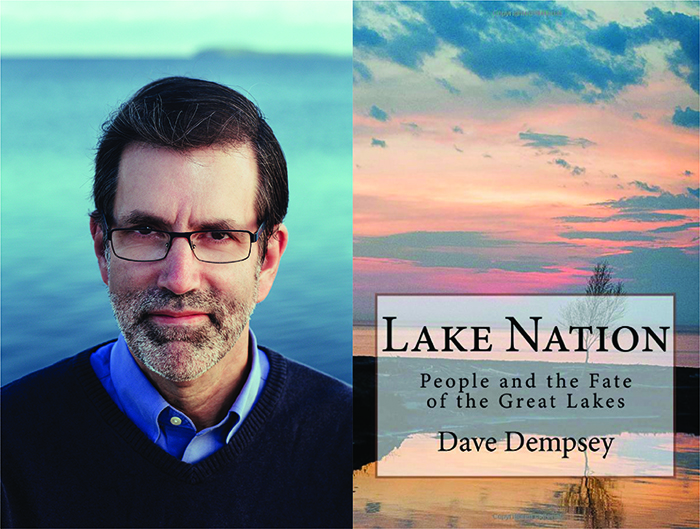 Author Dave Dempsey’s latest book steps back from policy and homes in on the hearts of Great Lakes residents to talk about their connection to the lakes.

Dempsey has a career neck-deep in Great Lakes policy and publication. He was the environmental advisor to former Michigan Governor James Blanchard, a former policy director with the Michigan Environmental Council and policy advisor with the International Joint Commission.

And he has published 10 books, including five about the Great Lakes.

The latest, “Lake Nation: People and the Fate of the Great Lakes,” is different from his other books because it’s not so much about political actions but why residents think the lake is in trouble.

“It’s the human dimension as opposed to the science dimension or the policy dimension,” Dempsey said.

He wanted to explore the gap between residents’ love of the Great Lakes and what they are willing to do to protect them.

“When people say they love the Great Lakes or love the environment in general they’re saying that because they think it’s expected of them,” he said. “It’s sort of an apple pie value but whether they’re willing to act on that feeling and make some sacrifices is a different matter.”

In his interviews with Great Lakes residents both familiar and unfamiliar, he kept vocabulary at a generalist level, he said.

“The whole point of the book is to look at an inner circle of people who are really knowledgeable about the Great Lakes and talk more from a general public perspective,” he said.

Dempsey thinks books about policy can come across as more political.

“So maybe policy books tend to frame the issue in a wrong way, that it’s all about politicians passing laws when politicians don’t pass laws unless there’s people forcing them to do it and that begins with these passions and connections people have to the lakes,” he said.

There are two major threats facing the Great Lakes today, he said.

“One of the threats is either ignorance or lack of motivation. Not enough people are familiar with the lakes or have enough information about them,” he said.

The other threat is how climate change in the long run will wreak many changes on the biology of the Great Lakes, he said.

“It sort of overarches all the threats facing the Great Lakes. If we don’t deal with climate change, perhaps a hundred years from now the lakes will be unrecognizable,” he said.

He translated into the book a hopeful and worried perspective from his interviews, he said. There is reason to be optimistic because people clearly care about the lakes, but Dempsey said he is worried that passion is not turning into actions to protect the lakes.

“I’m hoping that we will see in the next coming decades, a heightening of consciousness about the Great Lakes in this region,” he said. “The lakes cannot take care of themselves, we have to take care of them.”

“Lake Nation” is available for purchase on Amazon for $9.95 in paperback and as an e-version.