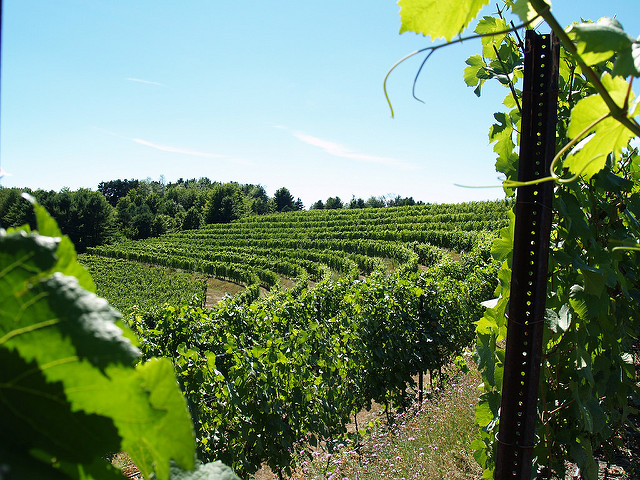 According to the International Organisation of Vine and Wine, wine production hit a historic low in 2017, spurred by poor weather in the European Union and other important producers.

However, Michigan vineyards might not raise their prices just to fall in line, according to Chateau Grand Traverse Winery President Eddie O’Keefe.

Most smaller wineries depend on direct-to-consumer business, such as in-person tastings or mail order sales, rather than retail stores, where they compete side by side with higher-priced European wines, O’Keefe said. That’s why many Michigan wineries won’t see price spikes from market forces.

Most U.S. wineries are “mom ‘n pop” operations, O’Keefe said: Global issues indirectly affect them, but in a way a lot of the small wineries are oblivious to them. There’s always competition, but smaller wineries have easier ways to determine their own destinies, he said.

“If it doesn’t affect you directly, most of the time people don’t care,” O’Keefe said.

Chateau Grand Traverse Winery, located near Traverse City, has been in business for 44 years, O’Keefe said, and was the first commercial winery and vineyard in Northern Michigan. Now, a large number of wineries cluster the Leelanau and Old Mission peninsulas north of Traverse City, and can be found scattered throughout the state.

Every winery is impacted differently by a different year’s success, O’Keefe said. On average a really bad year where costs are high could take one and a half years to recover from, while two bad years in a row can really adversely affect business.

Most Michigan wineries are now stocked with product in their inventories, so he doesn’t see any reason for prices of local wines to rise. A bad year for Europe weather-wise might not mean a bad year for Michigan.

Wineries that compete for shelf space might be a different situation.

China tacked on an additional 15 percent tariff on U.S. wine exports in early April in response to escalating trade tensions. American wine exports might be priced out of Chinese markets, and larger U.S. wineries would have to repurpose those exports, potentially flooding U.S. markets with cheap wine and lowering domestic prices, O’Keefe said.

This year’s wine production hasn’t started because there’s still snow on the ground, but if there’s no frost through May, O’Keefe said 2018 could be a good year for wine production in Michigan.

Wine continues to be a growing industry in Michigan, and O’Keefe said he sees no reason why it won’t continue to grow.

“The only thing that would mess with that is good ‘ol Mother Nature,” O’Keefe said.