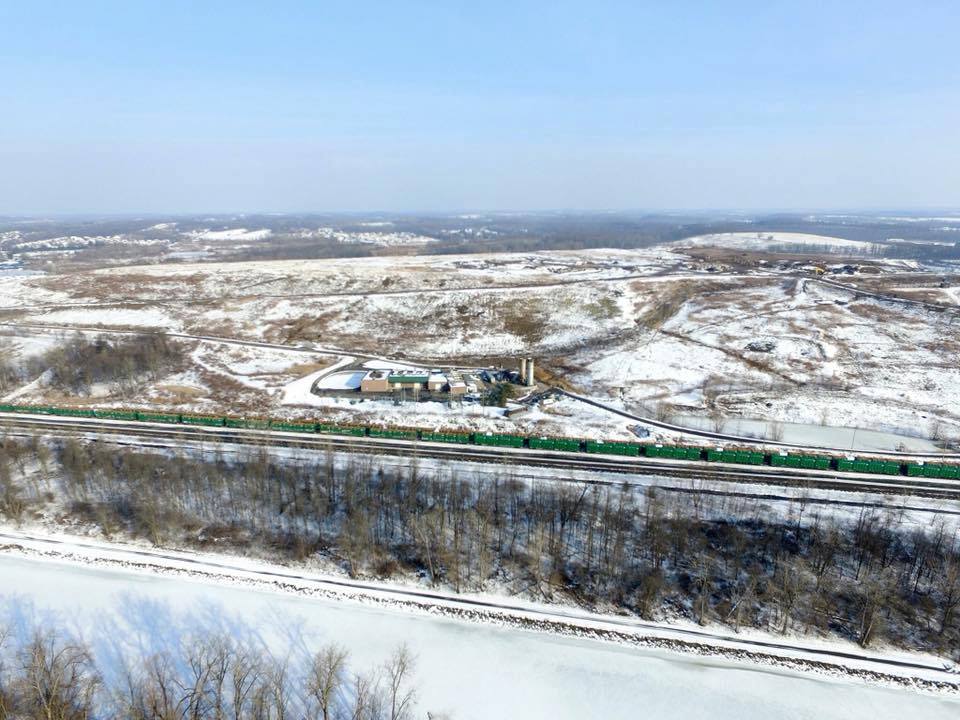 High Acres landill next to what McNeil calls “trash trains.”

A New York landfill recently recognized for its commitment to the environment and community is now under fire from state regulators.

“We feel like we are losing our town to a corporation,” said Gary McNeil, director of Fresh Air for the Eastside, a community group trying to get rid of the odor that has crept into Fairport, near Rochester.

That odor is coming from High Acres Western Expansion Landfill, according to the notice of violation issued by the New York State Department of Environmental Conservation in February.

This comes just two years after the department recognized the landfill for its commitment to environmental sustainability, social responsibility and economic viability, according to its press release.

McNeil grew up about three miles from the landfill. The smell has not always been a  problem, he said. Most residents expect to smell the landfill a few times a year, but now they are smelling it four to five times a week, he said.

The stench led him last year to the Fresh Air for the Eastside Facebook group. That’s where neighbors started sharing their experiences, McNeil said.

“It is a life-altering situation to have these gasses seep into your daily life,” he said. “There is truly no entity looking out for the people impacted by this landfill.” 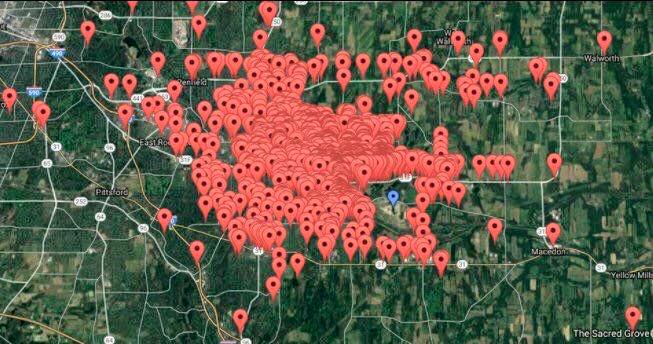 Photo shows where the 5,000-plus complaints are coming from in respect to the location of the landfill. Image courtesy Fresh Air for the Eastside mobile app.

That Facebook group turned into a community organization to provide visitors with media, research and a forum to learn about the landfill’s impact. More than 5,000 complaints in less than four months were logged on a mobile app created by the group.

The landfill is located in the towns of Perinton in Monroe County and Macedon in Wayne County.

“It’s a very pressing issue for the area and a large concern for the town,” said Eric Williams, who manages public infrastructure for Perinton.

The most common complaint is a strong, gas-like odor, Williams said.

“We have not heard of any health complaints, but definitely complaints about the gas odor,” he said.

The notice puts into place a number of design changes the landfill must take if to avoid financial penalties, including adjustments to trash storage wells, backup power for the gas control system in case of power outages and  installation of gas collecting pipes.

When asked to respond, landfill staff sent a statement that said they know the odors have gotten worse and they are working to fix it. Some of the odor is caused by construction, but this construction is necessary to resolving the problem.

“High Acres Landfill is confident that we can return to the good neighbor status that we have known for nearly 50 years,” according to the statement.

Residents want to see long-term change, McNeil said, and worry that their fresh air will not last. For members of Fresh Air for the Eastside, the goal will continue to get rid of the stink.

The Fresh Air for the Eastside community group published this video as a way to showcase how residents and business owners have been impacted by the increased odors from High Acres Landfill.

“We don’t know if that means trying to get the landfill shut down,” McNeil said. “As of now, we are trying to work with the towns where the landfill is located in.”

“If they smell something, that’s always a sign that they are exposed to what is coming out of the landfill,” he said.

The garbage in the landfill is broken down by bacteria that release gases that stink, he said, but how bad a gas smells does not necessarily equal how harmful it is.

The landfill is still working to fulfill all of the changes listed in the notice of violation with deadlines in late March and April, according to a press release from the Department of Environmental Conservation.

2 thoughts on “How stinky can garbage get before someone gets mad? Ask High Acres.”