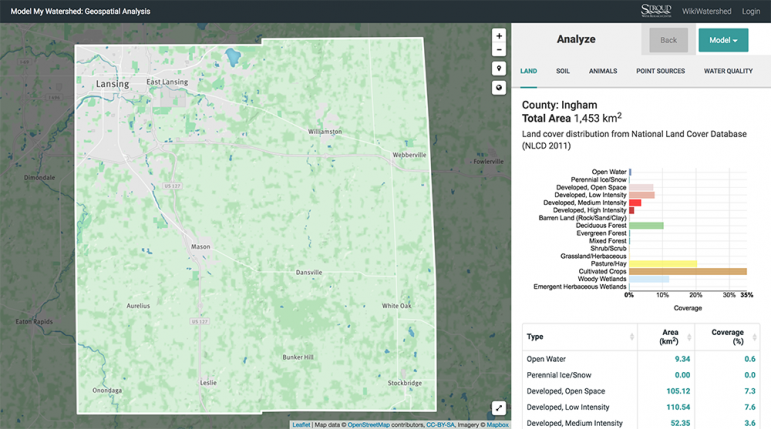 Screen shot of Model My Watershed being used to collect land use data from Ingham County.

A model 10 years in the making could make watershed protection decisions easier.

Model My Watershed is part of a suite of tools offered by Stroud Water Research Center on WikiWatershed.org. David Arscott, the center’s executive director, and Steve Kerlin, the center’s director of education, presented the tool recently at River Network’s 2017 River Rally in Grand Rapids, Michigan.

The application lets users analyze data, model storms and compare conservation and development scenarios in a watershed. It’s free to use, and users can predict things like how a new parking lot affects evapotranspiration, runoff and soil infiltration–or how using porous pavement for that same lot or adding an adjacent rain garden could mitigate those effects.

Users can define areas of study by congressional district, within one square kilometer, by drawing it freehand and other options. They choose from a number of map views. Selecting an area of study produces data including the land cover distribution, hydrologic soil distribution, estimated number of farm animals and discharge averages from point sources.

Then users can model a single storm or create a multi-year model, which looks at averages over 30 years. 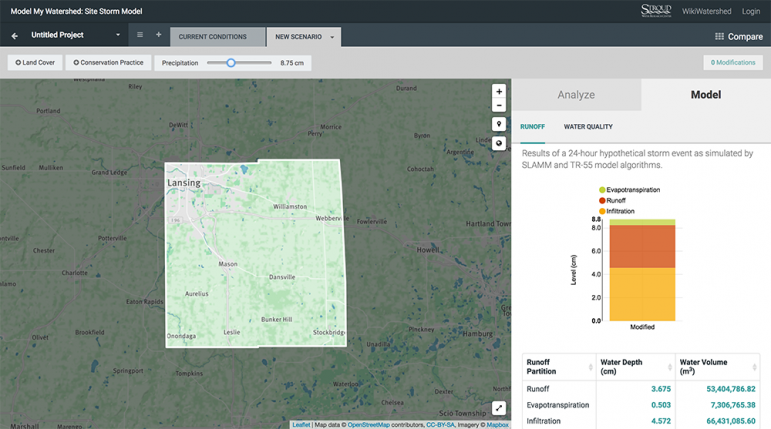 Model of a 24-hour storm event in Ingham County.

Teachers and students are some of the app’s primary users.

“Students have used it when they wanted to propose a rain garden,” Kerlin said. Students use the model to determine how installing a rain garden would change the environmental impacts of the school’s land use, and then they do additional research on things such as how much the project might cost.

“One school in Pennsylvania did a presentation to the principal and the school board,” Kerlin said. They approved the project and built a rain garden.

One of the grants funding the application supports a curriculum built around it. The team has been presenting the tool to classrooms and developing it to be teachable in schools.

But students and teachers aren’t the app’s only users. The Model My Watershed team works farmers for larger scale projections, such as modeling the effects of a buffer of vegetation around nearby streams to filter nutrient runoff. Land use planners, water associations and state government agencies also benefit from the program.

The fundamental parts of the tool are usable throughout most of the U.S. Some additional funding and access to data made the tool particularly dynamic in the Delaware River region. Users there can find numbers on point-source discharges, a higher resolution stream network and color-coded concentrations of phosphorus and nitrogen.

The tool has been online for a few years but has gained more popularity recently. Kerlin estimates there are around 8,000 users at present, but he said it’s hard to track since not every user must register. The team continues to host seminars to spread the word.

“The U.S. EPA hosted a webinar about it,” Kerlin said. “We broke their record. Twelve hundred people registered for the webinar. Before that, their record was 500.”

Each month brings a new update, expanding the app’s features. Current funding will allow for 18 more months of updates.