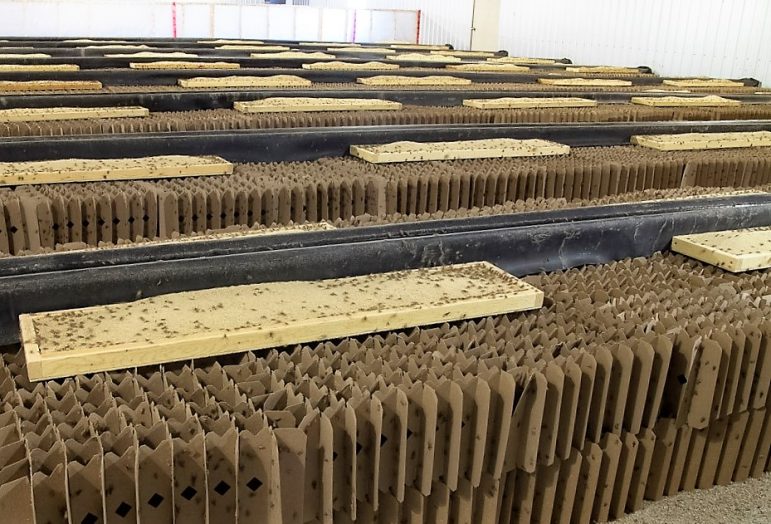 Entomo Farms in Ontario raises its livestock in what are called cricket condos. Image: Jarrod Goldin

The Great Lakes region is expanding efforts to meet the demands of a looming global food scarcity crisis.

The problem: It’s hard to convince people to eat bugs.

The Food and Agriculture Organization of the United Nations (FAO) estimates the world’s population will grow to 9 billion by 2050. And it will take a big increase in food production to feed all those people. 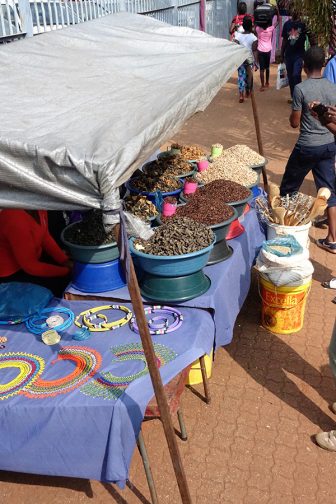 Eating insects is well-established in Africa, Asia and Australia. But the agency concludes that the practice called entomophagy should increase in North America as well.

“Further exposure and introduction to entomophagy itself can help to reduce the surprise and novelty of seeing insects on the plate,” the agency reported in 2013. “Zoos, museums and universities can play an important role here. However, the emotion of disgust can be very hard to change.”

The number of insect farms in Canada and the U.S. is growing. In the Great Lakes region alone:

Most new insect farms, processors and makers of specialty products are startups that sell online, making it difficult to determine how many are out there, experts say. There are at least 25 in the U.S. and Canada,  according to the Bug Burger website, a source of worldwide, industry information on entomophagy. 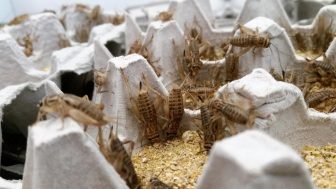 Akron’s  Crunchy Critter Farms will sell live crickets to be eaten whole or manufactured into other products, executive director James Williams said. “It is a fun and exciting process trying to bring bugs to the dinner table and one we really enjoy.”

The company will create its own products as it grows and interest expands, he said.

Entomo Farms, in Norwood Ontario, northeast of Toronto, is North America’s largest producer of edible crickets. Its 60,000-square-foot facility will expand to 100,000 by the end of the year, co-owner Jarrod Goldin said.

Entomo Farms holds 100 million crickets at any given time. It produces about 36,000 pounds of raw crickets a month. Goldin said the expansion could add another 24,000 pounds per month. The company is in talks with one of the largest food manufactures in the world, he said.

Stereotypes of people eating live insects are misleading, Goldin said. Crickets and mealworms in North America are most often ground into a high-protein powder or seasoned and roasted whole.

They’re also manufactured into chips, protein bars and tortillas. Powdered and roasted whole crickets take on the flavor of the foods they’re prepared with, Goldin said. They have an earthy taste like to mushrooms or grains if eaten unseasoned.

“The powder allows them to get into the door and realize it tastes pretty good,” Goldin said. “Maybe they will realize it’s not so scary.” 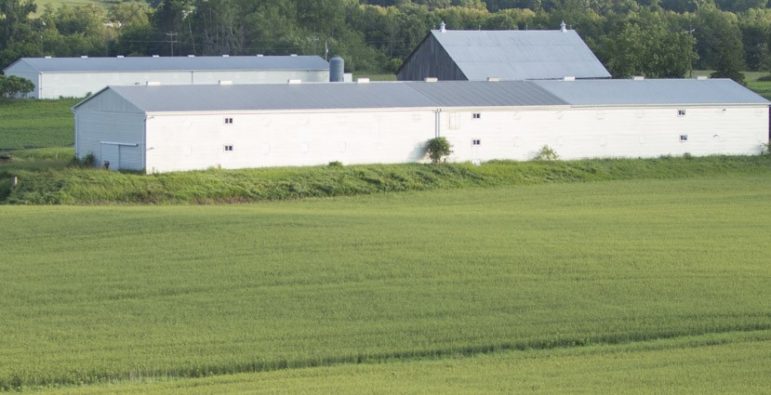 And bugs can be easier on the environment. Insects eat much less per pound and require less energy and water than other livestock. That’s important because the FAO has identified the lack of water as a threat to food production.

One pound of consumable crickets requires about one gallon of water, growers say. The U.S. Geological Survey reports that more than 1,800 gallons are needed per pound of beef. But that number is widely disputed by environmental advocates who say it’s much higher.

Neither Health Canada nor the U.S. Food and Drug Administration officially recognize insect farms as food producers.  But in October, Entomo Farms launched a new effort with the Canadian government to improve industry standards and further increase the environmental benefits by using less energy and water. The project indicates progress, Goldin said.

But there are concerns. 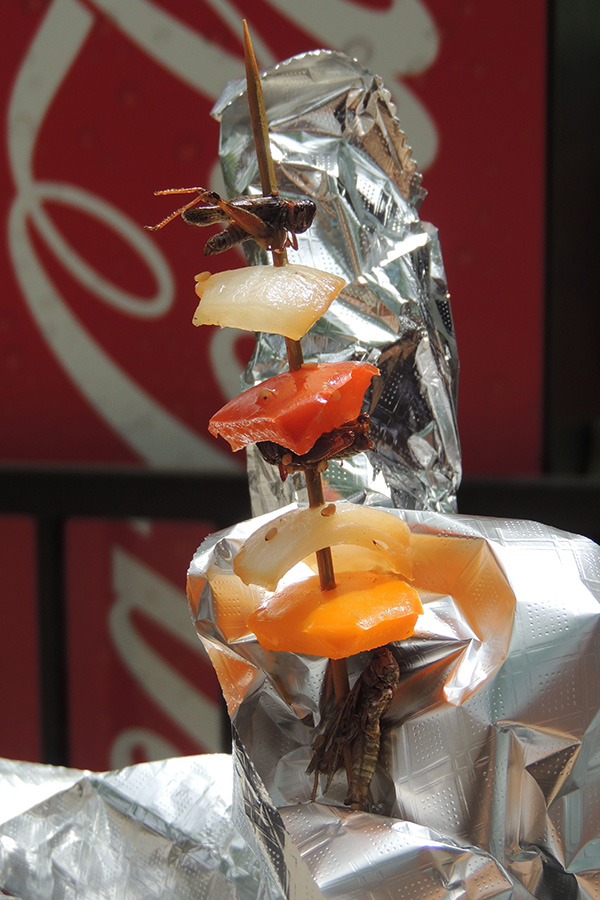 A recent study from the University of California Davis, published in PLOS One, concluded that crickets raised on livestock feed produce slightly more protein than chicken. But when fed discarded produce, the crickets’ nutritional value decreased and nearly all died.

Those findings contradict the idea that insects are the solution to sustainability, according to the UC-Davis researchers. More research is needed to improve the environmental benefits, they wrote.

People with shellfish allergies can also have severe reactions to insects, according to the FAO. And raising insects for food increases the potential to inadvertently release non-native species into new habitats.

Affordability is another obstacle. Cricket-protein powder sells online for up to $40 U.S. per pound. A five-ounce bag of cricket chips costs about $3 U.S.

But demand is unsteady.

When he began selling cricket products in February, they were hard to keep in stock, said Brad McMullen, who runs the upscale Summerhill Market in Ontario.

But recently he moved them from the front of the store to a less prominent location.

“There were a lot of people intrigued by the idea of it,” McMullen says. “We had local press, newspapers, news coverage. People were calling from all around Toronto to see it and try it.”

That high interest disappeared. “It was a fast and furious push for all of those things. It was a lot of adventure eating,” McMullen said.

Today he’s unaware of any repeat customers except his daughter, who eats roasted crickets as snacks.

The supply isn’t large enough to reduce costs, said Lesnik, who hosted the North American entomophagy conference in Detroit. Much of that conference was focused on marketing to younger consumers who drive market demand.

“They are challenging the status quo and the previous norms,” she said. “I think edible insects fit into the (younger) generation’s mindset. We don’t have to think about things and do things the way our parents and grandparents have done.”

Entomophagy experts, including Lesnik, predict the reluctance to eat insects will disappear the way it did for eating raw fish and seaweed.

Many people considered sushi repugnant decades ago, but it is now widely popular, she said.