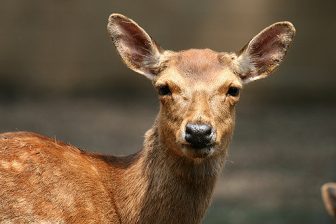 The state’s first case of the fatal disease was discovered in wild deer in 2015. Image: Nakae

In an effort to protect Michigan’s deer, the state’s Department of Natural Resources (DNR) wants to double the number of core areas monitored for deadly chronic wasting disease.

This expansion would include six new townships in Eaton County and two in Clinton County.

The fatal disease interferes with the digestive abilities of deer, literally causing them to waste away in its later stages, said Drew YoungeDyke, chief information officer for Michigan United Conservation Clubs, the state’s largest hunting organization.

The disease can cause deer to become delirious, walking in circles for hours and being unable to even properly drink water, he said. “They become kind of robotic.”

The full extent of the spread of the disease is not yet known, said Chad Stewart, the DNR’s deer management specialist. “So far we’ve found positive samples from Meridian Township in Ingham (County) to Watertown and DeWitt townships in Clinton County.”

The first case in the state was discovered at a deer farm in 2008 but the first case among wild deer was found in 2015, said Cheryl Collins, cervid program manager for the Michigan Department of Agriculture and Rural Development.

Ag and Rural Development operates two programs to combat the  spread of the disease, she said. One mandatory requiring the testing of animals who died before reaching a year in age and 25 percent of all animals killed. The second is a voluntary program requiring all animals that die on the farms be tested.

The DNR’s response has been aggressive, said Stewart. With only six more samples testing positive for the disease of the 5,000 the department has collected since last year, the disease is not an immediate threat.

“You won’t see a potential impact in five or even 10 years,” he said. “You’ll see the damage maybe 40 years down the road. We’re trying to prevent that now.”

The disease has ripped through herds of deer in states across the country from Wisconsin to Wyoming, Stewart said, taking almost half the deer population with it in some areas and threatening the long-term existence of some types of deer.

Attempting to stop the spread of the disease once it reaches the levels of infection experienced by Wisconsin and Wyoming is not an option, he said. “There would be no combating the disease.”

Prior to the discovery of the disease in Michigan, DNR had tested 35,000-plus specimens, the overwhelming majority of them deer, with some moose and elk, since 2002.

Continued vigilance on the part of the department and of local hunters in turning in their deer carcasses to be tested is key to stemming the spread of the disease, said YoungeDyke.

The Centers for Disease Control and Prevention also caution against eating the meat of infected deer, although no proof that doing so harms humans has been discovered, he said. “Like with mad cow disease, there was no proof until there was.”

The DNR’s proposed expansion will be decided upon at the meeting of Natural Resources Commission in May, Steward said.