ST. IGNACE – The company that owns an oil pipeline crossing below the Straits of Mackinac practiced responding to a spill in case the 61-year-old pipe ever bursts.

Officials with the Calgary-based Enbridge Inc. practiced oil-spill response drills on Thursday. They deployed booms, boats and people for shoreline and open-water clean up.

The exercise came one day after U.S. Sens. Gary Peters and Debbie Stabenow of Michigan introduced federal legislation to review the safety of pipelines and require more oil-spill drills. The bill would also ban transporting crude oil by vessel. 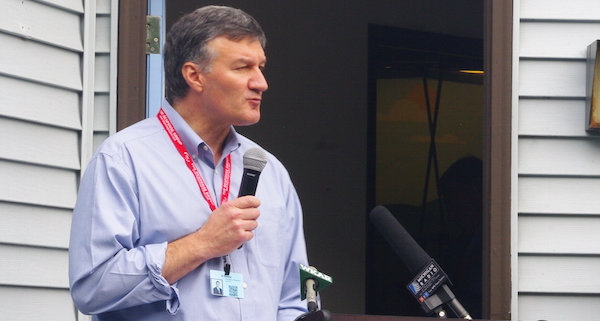 The drill was intended to prove the effectiveness of coordinated cooperation among Enbridge, government agencies and law enforcement agencies. “We all have insurance policies,” said Enbridge CEO Al Monaco, above. “We don’t go cheap on insurance. We don’t necessarily want to have to use it but it’s going to be there.” Image: Mahmoud Haidar

Recovering oil is particularly difficult with open-water spills and winter conditions – both red flags in a Straits spill, said Charlie Usher, president of Marine Pollution Control, an oil cleanup and recovery company hired by Enbridge. “These practices are real important.” 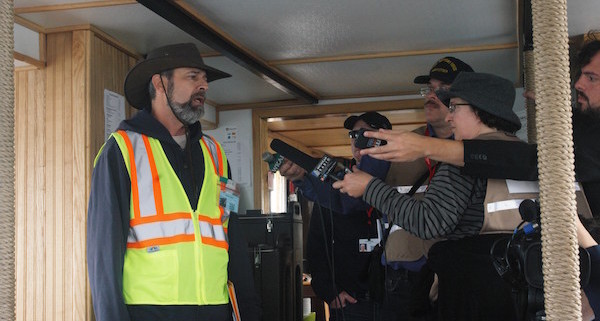 Marine Pollution Control has assisted Enbridge with response drills in different types of weather. “If the sea state gets to the point where the operator is uncomfortable, the safety of the operation is at risk and it has to shut down,” said Charlie Usher, above, president of the Detroit-based oil-response company. Image: Mahmoud Haidar

Environmentalists worry that the pipeline could spew oil into the Great Lakes and have called for shutting it down. Earlier this week FLOW, a Traverse City, Michigan-based water advocacy group, called for an immediate shutdown of the pipeline until experts  evaluate safer modes of oil transportation and routes, according to a press release.

In the past three years, Enbridge said it has bought thousands of feet of boom material, practiced air monitoring and prepared for spill response in various types of weather. 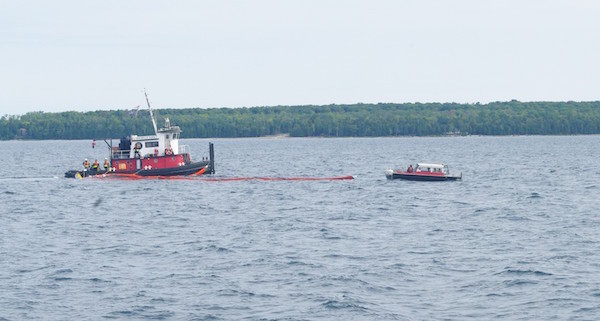 A tugboat deploys a boom in the Straits of Mackinac during the open-water response drill. Light crude oil is buoyant and can spread rapidly. “We’ve had to respond many more times than we’ve done drills,” said Charlie Usher, president of Marine Pollution Control. While most spills don’t “usually happen on open waters, this is a big ole’ body of water and that can make it challenging.” Image: Mahmoud Haidar

The company says that no spill is acceptable. But environmental groups and other critics are worried about a repeat of the 840,000-gallon spill in the Kalamazoo River in 2010. It was on a pipeline operated by the same company and resulted in the largest inland oil spill in U.S. history.

The Michigan Petroleum Task Force, led by Attorney General Bill Schuette and Dan Wyant, director of the  Department of Environmental Quality, recommended banning the transportation of heavy crude oil through the Straits pipeline in July. 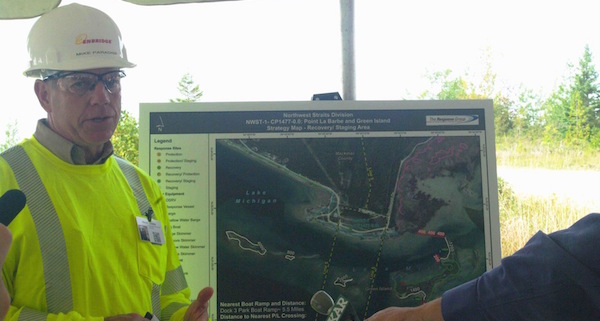 Pipeline maintenancesupervisor Mike Paradise explains a map that shows booms at places where oil is likely to go and can be confined. These optimal collection points change with wind direction. Spills require hour-by-hour solutions. “These types of drills are about training our people and exercising our equipment,” Paradise said. Image: Mahmoud Haidar

The task force also recommended requiring an independent analysis of alternatives to the existing Straits pipeline, according to the Michigan Petroleum Task Force Report.

Critics question whether responses by government or Enbridge are sufficient.

“The company can’t be trusted with its track record,” Aaron Payment, a leader of the Sault Tribe of Chippewa Indians, said at a press conference Friday. “Their previous responses were chaotic and the outcome was devastating.” 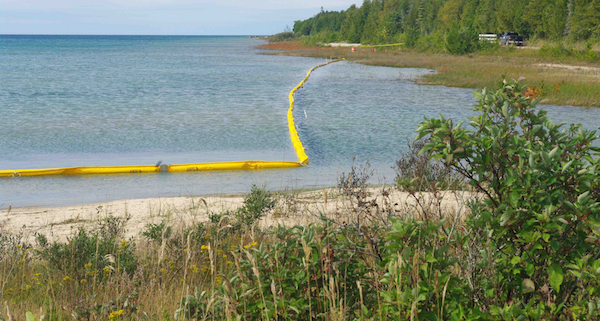 This 2,400-foot oil boom stops oil just before the sensitive Upper Peninsula shoreline near St. Ignace. Enbridge officials say that about 500 employees would be deployed during a spill — half ashore and half on open water. Image: Mahmoud Haidar 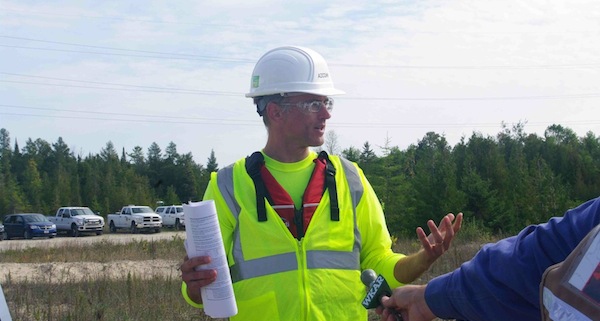 Colin Plank is a geomorphologist with AECOM, a Lansing environmental infrastructure and design company that assists Enbridge with response efforts. Mapping and other assistance from outside companies allow Enbridge to more effectively manage a spill, said Enbridge CEO Al Monaco. Response experts say that a Straits spill could prove more challenging than the one on the Kalamazoo River. Image: Mahmoud Haidar 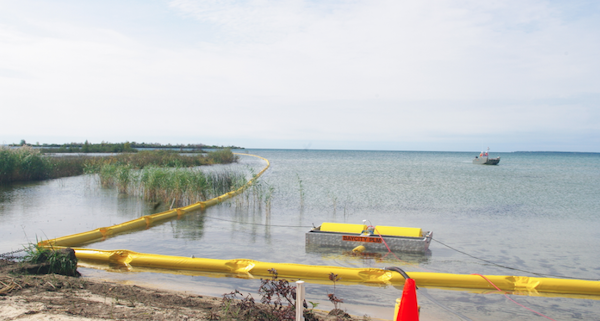 Drum skimmers like these on the Straits of Mackinac near St. Ignace, allow oil to be collected, separated from water and piped out. Enbridge officials say their goal is to retrieve 100 percent of spilled oil, but could not report the average amount that is typically recovered. Image: Mahmoud Haidar 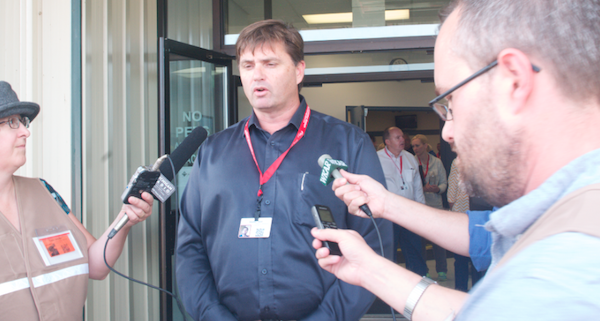 Enbridge brought together officials from the state Department of Environmental Quality,  State Police and the U.S. Environmental Protection Agency in a communications headquarters to simulate how quickly the company could respond. The scenario simulated a 4,500-barrel spill, a very unlikely scenario, said Stephen Lloyd, above, senior manager of emergency response. The company can focus on realistic situations based on the incident that occurred in the Kalamazoo River, Lloyd said. Image: Courtney Bourgoin 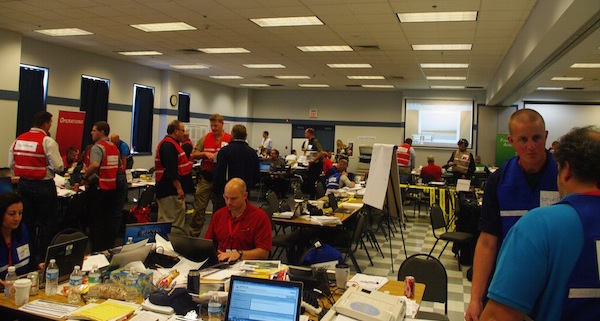 The 17-hour response to the Kalamazoo River spill was vastly improved in the day’s drill. The company began deploying booms and vessels at 8 a.m. and they were ready to collect oil by 9:10 a.m., said Enbridge official Jim Schott. The ability to respond depends on how harsh conditions are that day. Image: Courtney Bourgoin 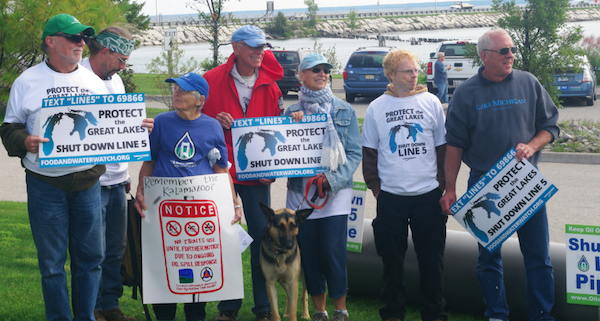 Aaron Payment, who chairs the Sault Tribe of Chippewa Indians, criticized the pipeline at a press conference in St. Ignace held by the nonprofit Food and Water Watch. “There’s two outcomes: they decommission before or after it ruptures,” Payment said. “Will we be forced to remediate another tragedy?” Image: Courtney Bourgoin