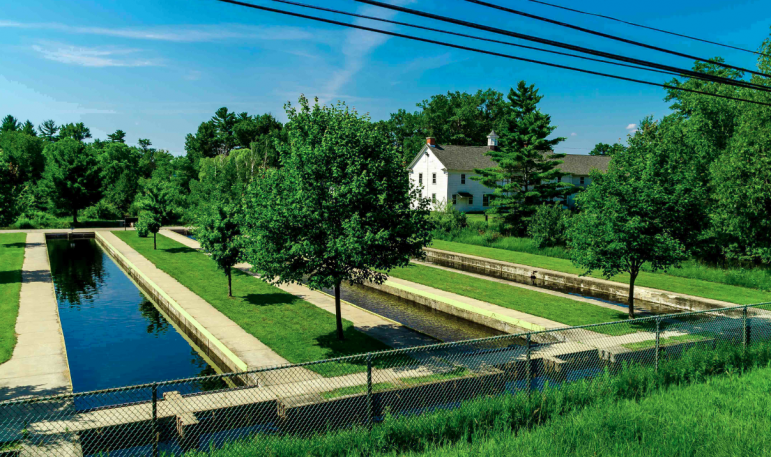 Raising fish can help better feed the world’s 9 billion people projected for 2050 and avoid war, pestilence and starvation, according to an operator of two Michigan fish farms.

The United Nations warns that food production must double and animal protein production triple to meet the demands of such a steep population, said Dan Vogler, owner of Michigan’s Harrietta Hills Trout Farm and Grayling Fish Hatchery. And aquaculture is an efficient way to produce animal protein.

“We have tremendous freshwater resources in the state of Michigan,” said Vogler, who is president of the Michigan Aquaculture Association. “My contention and the contention of our industry is that we can build a properly-regulated, safe industry that can grow fish to feed people.”

But he says that Michigan’s permitting system inhibits its growth because it is complex, challenging and technical — especially for small family businesses.

Vogler said the extensive paperwork and preparation is the same permitting process the Department of Environmental Quality applies to all industries that discharge into a water body.

“Does it make sense to you that they would regulate a small fish farm the same way they would regulate discharge from Dow Chemical, or from the city of Detroit or from a nuclear power plant?” he said. “All of those entities use the exact same forms and paperwork and processes as our little fish mart does.

“At the end of the day, what’s the worst thing I’m going to discharge? It’s a substance called fish poop.”

Vogler’s permit for the Grayling Fish Hatchery is probably one of the strictest issued by the Michigan Department of Environmental Quality, said Brad Wurfel, the agency’s communications director. It addresses the intricate balance of protecting the environment while still allowing a business to operate.

“If he does discharge too much we’ll know long before it’s a problem, while it is still a manageable problem,” Wurfel said.

The facility is on the Au Sable River. The main concern is that phosphorus and ammonia in the river will reach unhealthy levels as a result of fish feces and uneaten food, Wurfel said.

But some environmental groups, like the Michigan Environmental Council, say that such a permit should never have been issued.

“The Au Sable is one of the very best trout streams in the entire country,”

Andy McGlashen, communications director for the council, wrote in an email. “The trout farm there puts at risk all the benefits Michigan receives from the Au Sable and its outstanding fishery, all for a very narrow benefit.”

Done properly, contained fish farms can be a viable source of local, sustainable seafood, McGlashen said. “However, when fish-farming operations are connected to our waterways, we start to get into some pretty risky situations.”

There are 55 aquaculture facilities licensed by the Michigan Department of Agriculture and Rural Development, said Jennifer Holton, the agency’s communications director. Three are required to have a National Pollutant Discharge Elimination System permit issued by the Department of Environmental Quality. Vogler holds two of these three permits and the third belongs to the Indian Brook operation in Jackson, she said.

The Federal Clean Water Act requires any facility that produces more than 20,000 pounds of fish per year to have a permit, Vogler said. Aside from the three private permitted facilities in Michigan and the state hatcheries, the rest of the private farms are under the limit that requires a permit.

Such producers have made concerted efforts to remain small enough to avoid regulation, Vogler said. He says he owns Michigan’s largest commercial fish farm — with eight ponds and nine concrete raceways — even though he feels it is not necessarily big.

Small facilities must take costly steps if they reach the point of regulation, he said.

“We’re trying to get our production at each of our two operations up to 300,000 pounds per year,” Vogler said. “That’s what we’ve had to shoot for just to be able to afford the regulatory structure that’s put on top of us.”

The permit application was 38 pages long and the permit is 27, he said. The application fee was $400 and there is a $600 charge per year to maintain it. But he must spend thousands of dollars each year on the personnel and testing it requires.

Vogler said he measures his discharge volume daily and submits water samples to a lab weekly. It takes around 15 man-hours per week or 20 to 25 percent of his staff time, he said.

Regulatory constraints could hinder the industry’s aim for a $1 billion aquaculture industry by 2025, said Ron Kinnunen, an extension educator for Michigan Sea Grant.

There is a significant lack of funding for aquaculture, Kinnunen said. Part of that may stem from the fact that fish are underwater.

Lenders hesitate to contribute when they can’t see the results of their funding, he said. That’s unlike if they financed a farm where they could view the chickens and animals in the pasture.

Permitting varies by state. Vogler hopes Michigan will move towards a system more like North Carolina’s — where the permit is a comparatively very short three pages.

The same federal rules apply to all states, but each has its own procedures, Vogler said. “Some of the states actually come directly under EPA regulation, so in those states you would actually apply for those permits with the U.S. EPA.

“Michigan is a delegated state, so the authority to write these permits is delegated to the Michigan Department of Environmental Quality.”