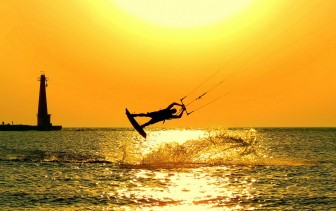 A Lake Huron beach in Ontario has created a separate launch area for kite boarders to keep them from crashing into swimmers.

Attempts to avoid such recreational conflicts are growing with the popularity of the sport that pulls people across water or snow with a giant kite attached to 90 feet of rope. Swimmers can get tangled in the rope or hit with the kites that can be larger than 40 feet across.

As concerns about swimmers and kite boarders sharing the beach grew,

It’s not the only place where it’s a problem.

Conflicts between the boarders and other beach goers are caused when there isn’t enough space, said Brian LeFeve, owner of Great Lakes Kite boarding in St. Clair Shores, Mich.

“We need a controlled area to do it in and a pretty big open area where there are no trees, power lines or houses -away from beach goers and any people, basically,” LeFeve said.

Fisher said the challenge is to increase public safety.

“When we think of the public, we are thinking of both swimmers and kite boarders,” he said. “This step toward creating launch zones was a step toward increasing public safety on beach fronts.”

Wasaga beach didn’t ban the sport because it is hard to monitor a ban, said Fisher.

The few beaches that have banned it, have done so because of kiters, who typically haven’t taken lesson are a little dangerous, said Lefeve. Their inexperience controlling the powerful kites can endanger others on the beach.

“There are problems like kites going down on beaches next to beachgoers,” said LeFeve. “So there’s been a couple of beaches on the west side of Michigan that have been closed for kite boarding.”

Every once in a while conflicts arise, said Aaron Johnson, marketing assistant at MACKite, a sports center, near Grand Haven,Mich. Lessons are not required before practicing this sport but are encouraged since it is so dangerous, he said.

If a kite crashes on the beach, people could get hurt if they grab the rope and the kite takes off, he said.

“You do have people that pick up used gear online, from a buddy or hopefully from a reputable shop that can steer them toward a lesson,” Johnson said. “We as kite boarders have to steer clear of everybody. We self police one another.”

The sport is very dangerous for those who are untrained, Johnson said.

“Not unlike getting behind the wheel of a car, there’s danger there. You wouldn’t take a teenager and throw them the keys and say ‘car’s in the driveway’,” Johnson said. “You’ve got to take them out and give them some instruction first. There’s a lot of power in those kites. “

Wasaga beach began using the separate launch zone three years ago. While some inexperienced riders cause problems and some swimmers get in the designated launch area, conflicts have declined, Fisher said.

Kite boarding is popular at Tawas Point State Park in Tawas, Mich., said Ronda Werner, an accounting assistant at the Lake Huron park. This park doesn’t have a specified area for the kite boarders, but there is an unwritten agreement between the beach managers and kite boarders that they will watch out for beach goers and wildlife.

It has worked well, she said.

At Lake Michigan’s Montrose Beach, Ill., kite boarders use streamers that indicate they are trained, Johnson said. This helps police the kite boarders because the lifeguards know who is trained and who isn’t.

“Around here, where we are, we’re pretty wide open,” Johnson said. “There isn’t any regulation stuff as far as I know of around the Great Lakes. I don’t know of anything beside Montrose that has a restriction like that.”

The sport has been steadily growing, said John Wardwell, cofounder of Kite US, a kite boarding website. There are now thousands of people participating.

New York and a couple other populous places will restrict it, he said. When you have a beach the size of a car and 500 people want to go to it, there’s destined to be problems.

It is nice when the beach management separates kiters from other beach goers for safety, he said. But putting a launch area in a certain corner of the beach doesn’t solve the problem.

It isn’t really restricting people from setting up there so there is still a hazard, he said.

The launch zone is the best option at this time, it is working if people give it a chance and follow rules, said Fisher.