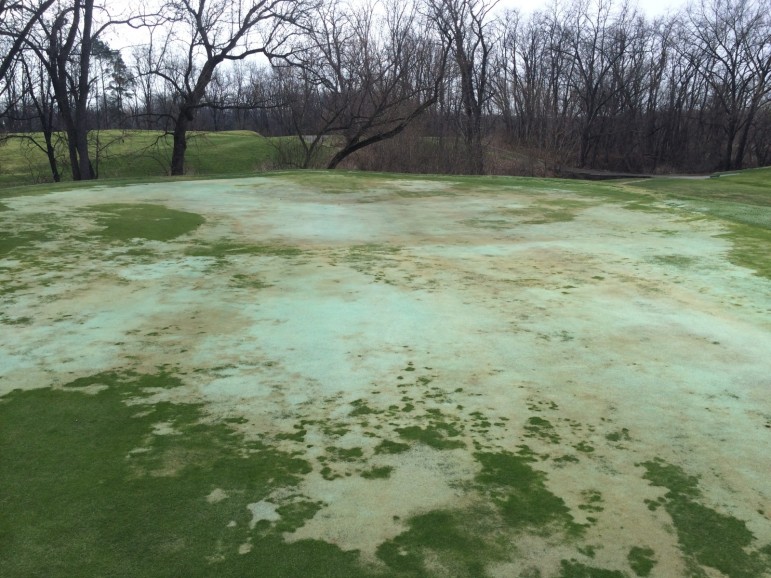 “About four to five years ago there was some ice damage but this is the worst it’s ever been,” said Adam Ikamas, executive director at the Michigan Golf Course Superintendents Association. The damage affects the whole course, but it is mostly to the greens.

“The golf courses’ turf and grounds are running at least three to four weeks behind schedule,” he said.

Ice is to blame for killing the turf, Ikamas said.

When the ice covers the greens it removes the oxygen, creating an anaerobic condition, said Joseph Vargas, a professor of botany at Michigan State University. Anaerobic gasses are toxic and can kill the greens.

Turf covered with ice for more than 60 days can die, Ikamas said.

There was a lot of snow throughout Michigan this winter, but the east side of the state got more of the turf-destroying ice, Ikamas said. In most cases snow is good for grass.

“It provides a bit of insulation,” Ikamas said. “When it turns to ice that’s when you have a problem.”

That’s the same damage the golf courses have on their greens, he said.

Up to 300 of the roughly 850 courses in Michigan were damaged, Ikamas said. About 70 percent of those are in the Detroit area.

The Cleveland Golf Course in Ohio suffered ice damage, said Roy Morscher, the editor of golf guides for both Cleveland and Traverse City and who is the president of American Golf Media.

The Cleveland area lacked the insulating snow cover, he said. But Traverse City had plenty of snow and all of northern Michigan golf courses have little to no damage.

The Roseland course in Windsor covered greens with sand to protect them from ice, said McQueen. It also helped that the course had longer blades of grass.

When courses use heavy rollers to compact the greens and cut the blades short, it damages the grass, said McQueen. So they go into winter with damaged turf.

There are many methods to fix dead greens, said Ikamas. Some courses use covers that act as mini green houses to bring up soil temperatures. But many courses can’t afford their $30,000 to $40,000 cost, he said.

Most courses made temporary greens until the greens are repaired, Ikamas said. The repair costs vary, but regardless of what it is there is substantial additional revenue loss when golfers can’t get on the course.

Researchers are trying to develop preventative measures to avoid this kind of damage in the future, Ikamas said.

Unfortunately, there isn’t much that can be done to fight Mother Nature but wait to fix the grounds, said Ikamas who hopes in the next month all of the courses will be 100 percent operational.