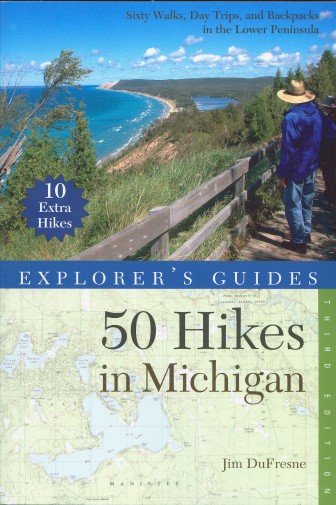 Jim DuFresne’s latest edition of his guidebook, 50 Hikes in Michigan, is now available after two and a half years in production.

It is far from his first guidebook.

After graduating from Michigan State University in 1977 with a degree in journalism, he moved to Alaska to work at the Juneau Empire newspaper.

Eventually DuFresne began writing travel and trail guidebooks on New Zealand and Alaska for Lonely Planet. Next was the guide, Isle Royale National Park: Foot Trails and Water Routes. He has now written more than 20 travel and outdoor guidebooks on Michigan.

Today he is the editorial director at MichiganTrailMaps.com, which provides trail information and maps. He splits his time living in Clarkston and Elk Rapids, Mich., enjoying life with his wife and two kids.

The author tries to hike a couple of times each week, if he can manage to get away from his work. His all time favorite hike is the Chillkoot Trail in Alaska. In Michigan, his favorite is the Lakeshore Trail in Pictured Rocks National Lakeshore.

Recently Great Lakes Echo caught up with DuFresne and asked him about building a career around hiking.

Great Lakes Echo: How did you fall in love with hiking and the outdoors? 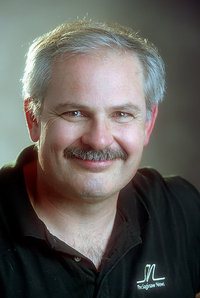 DuFresne: My first job out of college was at the Juneau Empire (newspaper) as its sports editor. When I got there, I found out I was also the outdoors editor. But it was a good experience. Doing a lot of the outdoor coverage, I just became enthralled about wilderness travel. Hiking, kayaking, having a plane drop you off somewhere to escape the small town was common. But I loved the mountains. It was a whole new experience for me.

GLE: How did you get involved with writing guidebooks?

DuFresne: In Alaska I was living in a flat with a bunch of people and one of them was an Australian woman. She had lived in New Zealand and raved about it. I was done working for the newspaper and needed an overseas trip like we all do sometimes. She convinced me I should go to New Zealand because I really liked backpacking. When I was down there, the first thing I did was pick up a guide book and it happened to be a Lonely Planet. So then I got the idea for writing a guide book for the trails down there. The first people I contacted was Lonely Planet, and they snapped it up.

I got lucky because in the 80s and 90s, Lonely Planet just took off. I did really well.

GLE: What is MichiganTrailMaps.com and when did it begin?

DuFresne:  It’s a resource website. We put up maps and coverage of trails. Really, it’s just another avenue for my content that I’ve always written about. It was the spring of 2010 when we really launched the website. That was when we had enough copy and material that people really started to look at it.

GLE: What kind of trails does the website focus on?

DuFresne: We do mountain biking, cross country skiing trails, etc. But we really focus on hiking and backpacking because nobody else is doing it. And so there’s like a vacuum and there’s like a need there. It’s not by choice. It’s more like where we’re driven.

GLE: What sets MichiganTrailMaps.com apart from the rest?

DuFresne: No one else has it. People are going through trails and trying to decide which ones they want to hike. Then they can download and print out those maps. We have almost 200 trails and that’s like four guidebooks worth of trails.

What makes us unique is we go out and hike every trail ourselves. That allows us to gather the GPS coordinates and the GIS data. Then we come back and do our own maps, for the most part. There’s just nothing else like it. I think that’s what’s driving a lot of the usage to our site is that the maps are so excellent and so detailed.

GLE: What is the process of producing one of these maps?

DuFresne: To hike each trail takes no longer than it does for you to hike, mountain bike or cross country ski it, except we are holding a GPS unit with us and stop and do trail notes. That’s the field research.

What takes the longest is producing the maps. It’s real time consuming. We do them through Adobe Illustrator, and we layer up USGS topography maps. That’s where we get our elevation data from. We use satellite imagery, and we use our own GPS data. You layer them up, one on top of each other, and then you physically draw them.

We definitely have a style no one else has. And I think people keep coming back because they’re good.

DuFresne:50 Hikes in Michigan has been out for 25 years. This is the newest edition and it was a two and a half year project. What makes it so unusual are two things:

One, it is full color on the inside. The printer just started doing this. The photos in full color just jump at you.

The second thing that’s really cool about it is that it’s totally integrated with our website. There are two sets to every map: the maps in the book are four by six inches, and the second set are eight by 11 inches and are on the website. The maps took over a year and a half to produce. So you can read about a trail in the book, and then you can go onto the website and download a better, larger map instead of photocopying the map or ripping it out of the book.

GLE: How do you decide which trails to hike and write about?

DuFresne: With this edition of 50 Hikes in Michigan, we swapped about 30 percent of the trails. There’s certain things that make a good trail. Sometimes it’s scenery. Sometimes it’s just a good walk. Sometimes it has other qualities, like birding. Sometimes these trails offer walk-in campsites. You park, hike two miles or less, and there’s this beautiful campsite on Lake Huron. No one else is there, because you hiked in two miles. There are certain qualifications that make a really interesting trail.

GLE: Have you seen a lot of change in the trails, particularly in the new edition of 50 Hikes in Michigan?

DuFresne: Trails don’t change that much, which is the beauty of them. One reason we swapped those trails out is that new trails had come on board and we wanted to include those. And also, we wanted to freshen the book up. There’s so many to choose from.

GLE: What kind of advice would you give to people when trying to decide on a trail to take?

Second, who’re you bringing along? Kids? Young kids can do trails really well. My kids were like three or four and we were hiking a couple of miles at that point. But the trails were carefully selected: They had a lot of cool stuff on them, they had a lot of places where we stopped, and I always had a backpack full of Snicker’s bars to get through to the end of it.

Also, what do you want to see? What interests you?

GLE: What is one of your favorite stories from all your experience hiking and traveling?

DuFresne: So I’m hiking this trail in New Zealand where they use a hut system. I get to the next hut where I’m going to spend the night and as I’m sitting down taking off my boots, this Australian guy sits down next to me so we start chatting. He tells me where he just came from and I asked him how it was. He said it was great and pulls out these photocopies of my New Zealand guidebook, pointing out where he had hiked.

“These are photocopies,” I said.

“I got it from the library and just photocopied it. I didn’t feel like buying it.”

So that night, we’re in this hut. There’s like 20 people and a big common area where everyone is. And there’s like five to 10 copies of my book around because people are using them. The Australian from earlier is sitting by me.

All of a sudden, across the room I see this woman is looking up at me. Now my photo never looks like me in my books, but I realize she’s made the connection.

She walks over and with a heavy accent asks if I’m Jim DuFresne. I said yes.

“This is your book?”

Everyone realized who I was then, including the Australian guy. I turn to him and said, “See, that’s why you shouldn’t photocopy books from libraries. You’re cheating me out of my royalty!”

And everybody else sitting with us turn to him and say “Yeah!”

The guy got really nervous. “I promise you, I’ll buy a copy before I leave New Zealand!”

It was one of my greatest moments as an author.

GLE: Can you describe in six words why you hike?

When you hike, it’s a slow, methodical pace. And what that does is allow you to look around you.

Editors note: You can buy 50 Hikes in Michigan at michigantrailmaps.com.