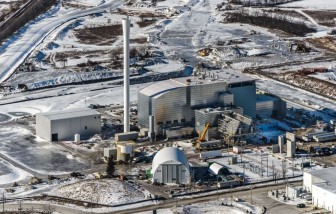 Aerial view of the EFW facility under construction. Photo: Region of Durham, Ontario.

Some Ontario residents will soon heat their homes with discarded burrito wrappers.

The Durham and York regions of the province have collaborated to build a facility that will create energy by burning garbage. Known as an energy-from-waste or EFW thermal treatment facility, it will divert municipal solid waste from landfills to incinerators to generate power.

It’s under construction and set to be completed in 2016. The new plant would mean less Canadian garbage would be dumped over the border into American landfills.

A recent study found minimal human health risks if the plant keeps its emissions at its initial approved limit of 140,000 tons per year.

“It’s what progressive jurisdictions are doing — maximizing value in what constituency considers garbage,” said John Foden, executive director of the nonprofit organization Canadian Energy from Waste Coalition based in Toronto.

Foden said the facility “diversifies things. You can reasonably have an integrated waste system. You can reduce, reuse and recycle everything you use with enough left over to operate these plants.”

Greg Borchuk, the project manager of the EFW facility said, “the Durham region currently ships all garbage to a landfill in the United States, and Ontario is dealing with the problem of how to dispose of waste, because landfill space is scarce.

“Recognizing this is not a sustainable solution, our council chose energy-from-waste as the most cost effective, environmentally friendly and sustainable manner for our waste disposal,” he said.

According to the study by researchers at Intrisik Environmental Sciences in Mississauga, the plant has the potential to generate 400,000 tons of emissions annually if it expands to its maximum capacity.

Foden said the plant will meet all requirements approved by the council in Durham. He called the plant safe, sustainable and clean, with no risk to humans. 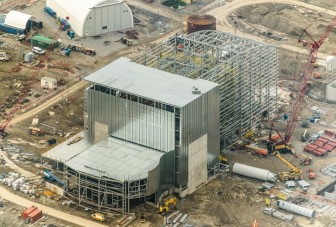 The energy-from-waste facility is set to be up and running by 2016. Photo: Region of Durham Ontario.

Mark Smith, the senior media relations coordinator at Ontario’s Ministry of Energy, said, “The regions of York and Durham are committed to meeting the waste diversion and emissions requirements of the Ministry of Environment in the operation of the facility.

“Processing more than the approved amount could result in a fine and/or shutdown if the practice were to continue,” said Smith.

And Borchuk said, the technology has proven successful in Europe and the United States.

“Energy-from-waste is proven to be sustainable and has less impact to the environment compared to other waste management options,” he said.

“The facility is designed to allow for future expansion in stages to the potential 400,000 tons, if demand requires. Waste diversion programs will work to offset the population growth and delay expansion into the future.”

Risks that could be associated with emissions at maximum capacity include inhalation of hydrogen chloride, according to the study. When this chemical compound combines with water in human tissue it creates hydrochloric acid. That’s a corrosive substance that causes coughing and nosebleeds when inhaled due to inflammation of the nose, throat and upper respiratory tract.

The research published in the journal “Science of the Total Environment” is based on a detailed, site-specific model of emissions from general municipal waste incinerators. It identified 87 other contaminants of potential concern (COPCs).

According to Borchuk, the cost of studies and the environmental assessment of the plant was approximately $15 million. The total cost of the facility design, construction and site servicing is $284.2 million.

“The energy-from-waste facility will create nearly 700 direct and indirect jobs during construction and an estimated 40 permanent plant operator jobs when the facility is operational,” said Borchuk. “It will also provide residents with long-term cost stability in the disposal of municipal waste.”

Covanta Energy Corp., the operator of the facility, says it will use curbside collection of everyday household garbage. That excludes recyclables and food waste, which must be separated before transportation to the facility. On arrival it will be put into two incinerators at high temperatures. The furnaces will power a turbine-generator and provide electricity for the region as well.

Air pollution control equipment monitors emissions to ensure that they don’t exceed guidelines set by the Ministry of the Environment, according to the study.

“Continuous emission monitoring systems as well as annual third party stack emissions tests will be used for assurance the facility is operating in compliance with emissions regulations,” said Borchuk. 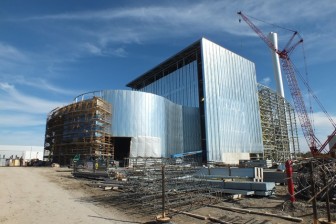 This photo is an early construction stage of the facility that will burn solid waste to generate energy. Photo: Ministry of Energy Ontario.

And Foden said, “To pretend the waste doesn’t exist makes us delusional. We need to recognize that waste, then diversify energy from multiple sources. This is a net benefit for the Great Lakes watershed.”

All of them have been found to be harmful to humans via inhalation, according to the study. They can also harm human health if they enter water or soil.