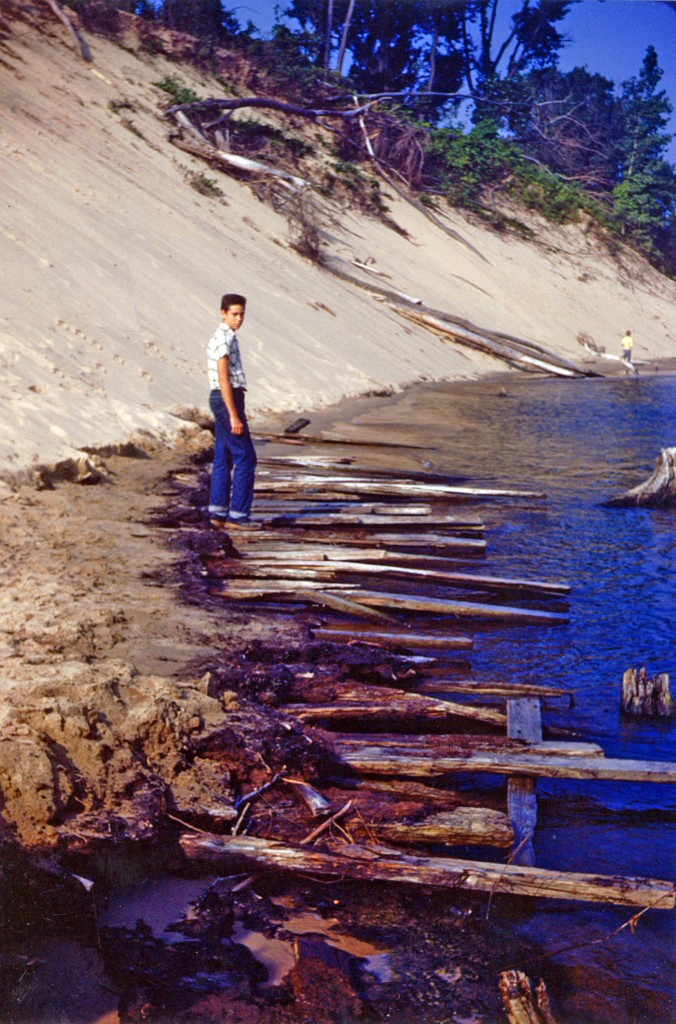 Until about 130 years ago, this Lake Michigan port town was near what is now Saugatuck.

Founded in 1836, it was made up of 23 buildings and around 100 people, according to Kit Lane, author of “Buried Singapore: Michigan’s imaginary Pompeii.”

It was surrounded by dense forests then. But they were cut to help rebuild Chicago after the Great Fire of 1871 nearly destroyed that city almost 100 miles away.

Little did Singapore residents know that by deforesting the area the dunes were being brought to life. Without the trees, the sand began to bury the city, and it was soon vacated and abandoned.

Eventually, only the dunes remained. 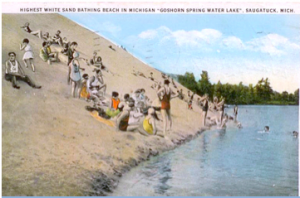 The west coast of Goshorn Lake has been moving over the years as a result of the shifting dunes. Image: Kit Lane

“If an archaeological dig was done they would find traces of the settlement right where it was located,” said Jack Sheridan, a member of the Saugatuck-Douglas Historical Society.

An estimated 10 buildings were moved to downtown Saugatuck. Anything that was left has either been buried by the dunes or scavenged for lumber and firewood.

Over the years, the area has seen many changes.

The western shore of neighboring Goshorn Lake used to move up to three feet a year. Now, it is covered in vegetation and stays relatively still, but the lake’s shape has changed since the late 19th century.

In 1954, Ron Jousma purchased some of the land to offer dune buggy rides.  Since then the Saugatuck dune rides have gone through a few different owners, but the dune ride business has remained, leaving tracks across the landscape.

These images from the aerial imagery library at Michigan State University document the evolution of the landscape: 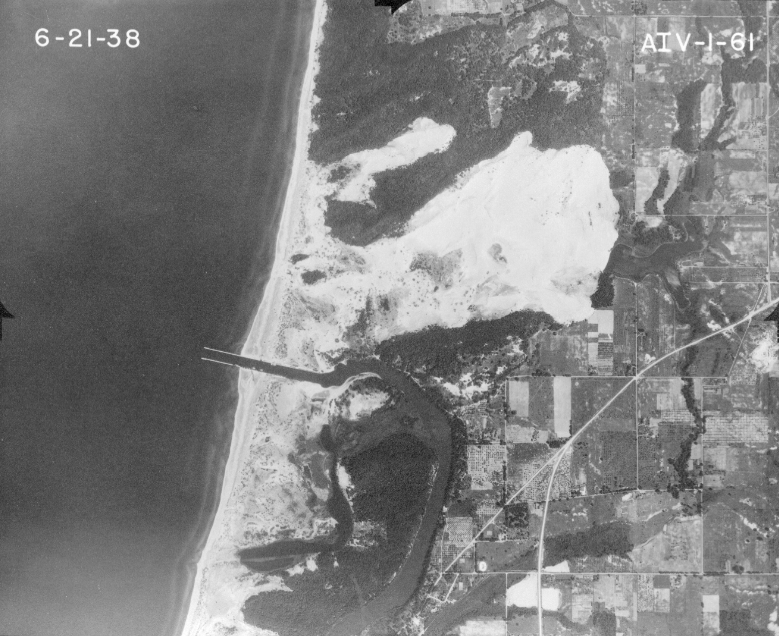 Singapore, Mich. was buried by sand in the 1870’s after the area was deforested and the dunes shifted. This photo from 1938 shows the empty area where the ghost town lies. 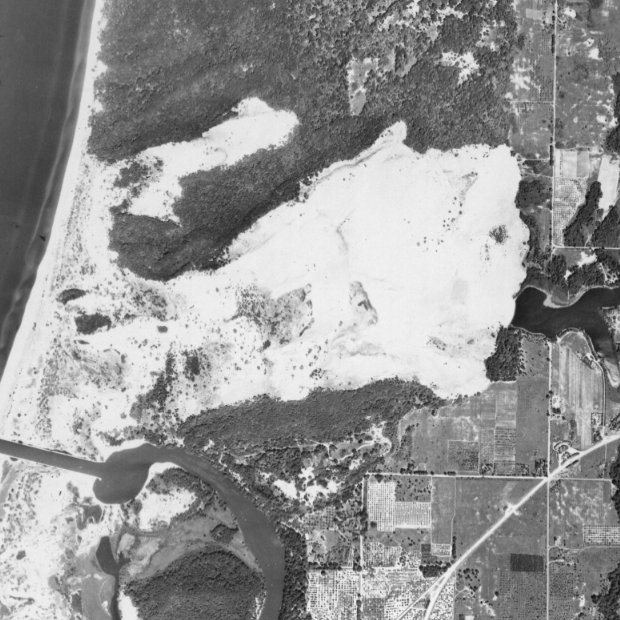 This 1950 photograph shows the dunes in Saugatuck, Mich. four years before the area was purchased to use for dune rides. 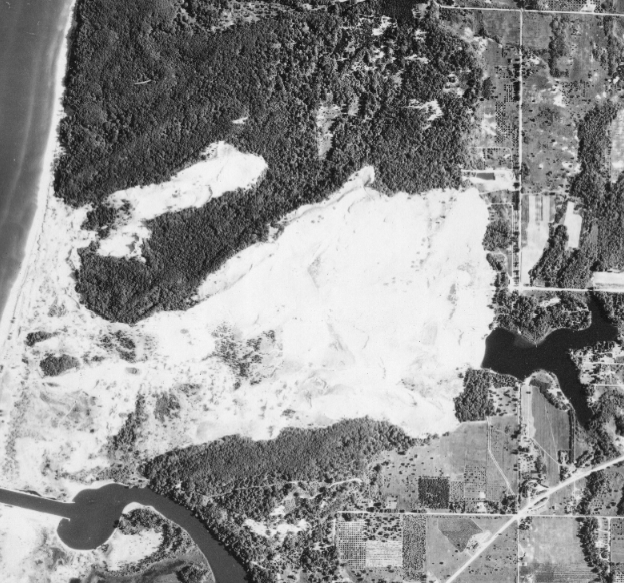 By 1960 you can just barely see the beginnings of trails, evidence that the area has been used for dune buggy rides. 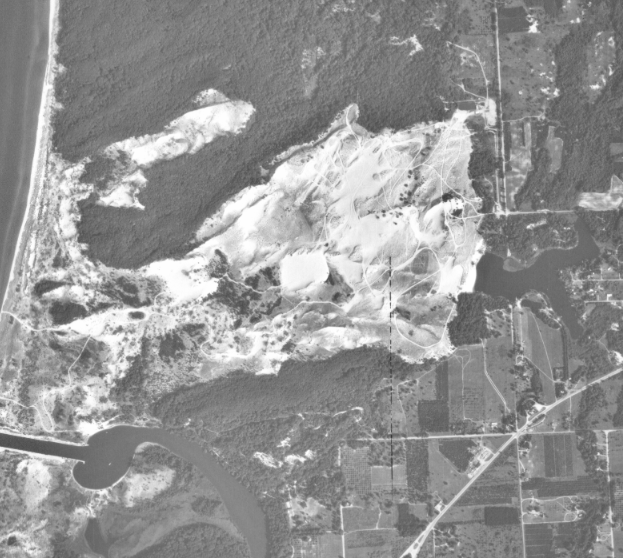 By 1967 it is very clear that there are tracks in the dunes from constant dune buggy traffic. 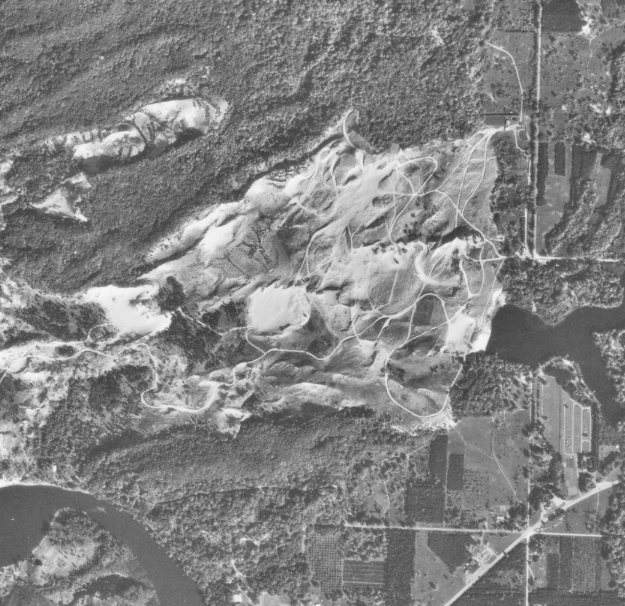 The tracks in 1974 are clearer than ever. The sand darkens over time as the beach grass grows in thicker. 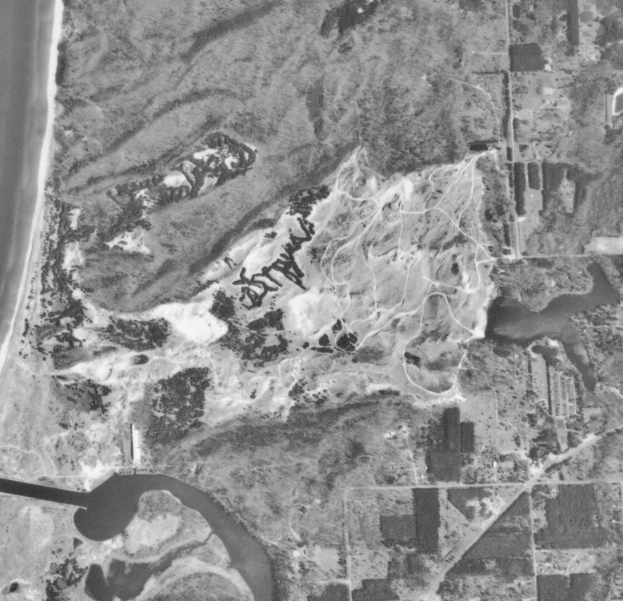 By 1994 the Saugatuck dune rides have been a successful business for 40 years and the tracks are a part of the landscape. 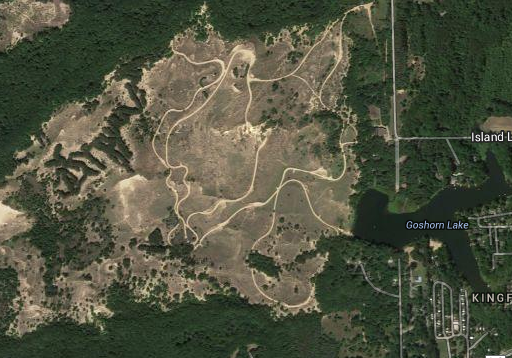 The sand dunes in Saugatuck as they appear today. Image: Google