If you sip your favorite wine and it tastes a bit funny, climate change may be the culprit. 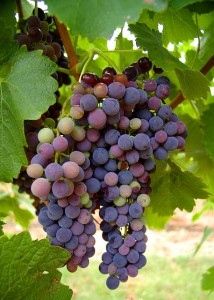 In Verona, N.Y. near Lake Ontario, the average bloom and bud bursts have moved up five to six days on average since the 1960s, said Tim Martinson, a senior viticulture associate at Cornell University’s Department of Horticulture.

Scientists say that extreme weather is one of the consequences of climate change caused by the burning of fossil fuels. What that means to wine production is as yet unclear.

It is still too early to tell, Elsner said.

“If we could tell our growers that they could expect consistent warming trends it would be beneficial, but at this point all we have is a more unpredictable climate. Things continue to change and all we can do is help farmers through it as it happens,” Elsner said.

Climate change can be good for some grape varieties, and not so good for others.

“When you drink wine, you are looking for specific characteristics,” said Paolo Sabbatini, an MSU associate professor of horticulture. “When you use grapes for making wine, if they are not ripe it is not good and the wine is not distinctive.”

Grapes used for red wines tend ripen at the end of the season. A longer season could allow for more consistently ripe grapes, said Martinson.

But  grapes used to make types of white wines, such as Riesling, depend on consistent temperatures of warm days and cool nights. The inconsistent weather brought on by climate change could cause them to be harvested early, which would change their character, he said.

Winter and summer seasons are key to growing grapes.

“Some grape varieties that we are growing are very sensitive, so if winter tends to be very harsh they tend to die,” Sabbatini said. “The second element is the amount of heat that we receive during the season. Some of varieties require a lot of heat so we need a long season of warm temperatures.”

Hot summer droughts followed by freezing winters are a result of climate change and make it hard for grapes to adjust.

“At the end of season, grape vines go into a dormant state,” said Martinson. “How deep they go and how able the buds are to withstand the cold is a gradual process that is very sensitive to temperature, so if you have both cold and warm temperatures, the buds will deacclimate a bit.”

The Great Lakes region has been getting increasingly warmer which is very good for grapes, said Sabbatini.

Hot summers are not an issue, as grapes are very tolerant of drought. Temperature increases can be beneficial as long as they don’t exceed 95 degrees, the point that the grapes start shutting down, Elsner said.

However a warming climate also means warmer springs, causing grapes to grow early, which subject them to frost, said Sabbatini.

The average first frost date is not changing quite as much.

“We’ve had situations where bud bursts will occur early, and you get a spring frost that can kill some of the green tissue which can destroy the crops,” said Martinson.

If there is a spring frost early in season, farmers lose crop and profit.  But if warmer seasons happen without the frost, it would allow farmers to produce better fruit, said Sabbatini.

The good thing about grapes is that they come out of dormancy slow, missing frosts that would damage spring fruits that grow on trees like apples and cherries, said Nikki Rothwell, wine grape industry coordinator for the Northwest Michigan Horticulture Research Center.

“We are all going to learn together. There is a lot of different research for varieties going on in our area and that is going to take many years to even have a clue to what would be a better grape variety to grow in these different conditions,” said Elsner said.

Editors note: This story was corrected 11/13/13 for the proper spelling of Tim Martinson and Erwin Elsner.