Good neighbors pay to put out their fires. 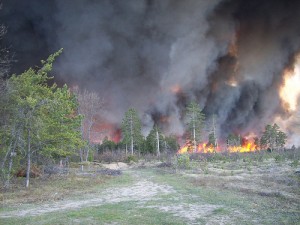 That’s why Rep. Bob Genetski, R-Saugatuck, says he introduced a bill that would allow the state to compensate localities for fighting fires on state-owned land through the already-established Forest Development Fund.

“This is state land and the state needs to be ta

king care of it,” he said. “It’s to the point where the state is a terrible neighbor.”

The Department of Natural Resources (DNR) does have fire crews and says on its website that it has the overall responsibility for wildfires. It also receives help from the U.S. Forest Service and local fire departments.

The forest fund currently can pay only for principal and interest on bonds and notes, reforestation, forest protection, timber stand improvement, and maintaining sustainable forestry standards, under state law.

Genetski said his bill would not require additional state money, but would make the existing funds available – as a second priority after principal and interest payments – to reimburse local governments.

The problem came to Genetski’s attention because Allegan County’s Valley Township – a locality that is about 60 percent state land – fought a fire that erupted in the Allegan State Game Area in the township a couple years ago, he said.

“The township is so small that it doesn’t have its own fire department,” he said.

Neighboring departments were dispatched to put out the fire, but Valley had to pay for the services. Since then, the township has tried to recoup its costs from the state, which has been less than helpful, Genetski said.

Brandee Ellis, township clerk, said, “We have so much DNR land and we’re not allowed to recover that money. We’re a small township, so something like that could be very detrimental.”

She added that fire wasn’t the only time the township paid other departments to fight fires on state land, but the other incidents cost much less.

“It’s a huge burden to the local government that has firefighters out there for four or five days,” Merrill said.

The president of the Michigan Association of Fire Chiefs, Bill Forbush, said he hadn’t heard complaints from local officials.

“I don’t think it’s a huge problem in this area,” said Forbush, who is also Alpena fire chief. “The DNR comes out right away and we work side-by-side and we really enjoy that partnership. We all count on the DNR when these forest fires happen.”

But, he added, forest fires are more routinely fought by local departments because a DNR fire crew isn’t always nearby.

However, that’s not a complete list of incidents on state land because the DNR doesn’t respond to every fire, said Scott Heather, assistant chief of fire operations for the department.

“Ninety-three percent of all wildfires are caused by people,” Heather said. “Since there are more people in the Lower Peninsula, there are more fires.”

The chiefs association has not taken a formal position on the bill, nor has the DNR.

Geneski said he hasn’t heard of complaints in other areas, but said it probably is a problem in the UP where there is an abundance of state land.

The bill is in the House Appropriations Committee. No hearing is scheduled.

2 thoughts on “Officials want Michigan to pay for wildfires”