Invasive species don’t have to be exotic, obscure or large to wreak havoc on the Great Lakes region.

Just look to the hardwood forests ravaged by non-native earthworms.

While small and slow, these invaders change the makeup of forest floors. In a forest without earthworms, organic material decomposes slowly, creating a spongy layer known as “duff.”  Duff aids forest growth, provides homes for animals and prevents soil erosion. 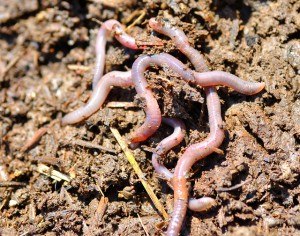 Many people don't think of earthworms as an invasive species but they wreak havoc on hardwood forest floors. Photo: Will Merydith (Flickr)

When worms invade they eat the duff, disrupting the natural growth of forests, killing off smaller plants and flowers and ruining habitats.

“The most visible impact that people notice from heavy or long-term worm infestations is decline in diversity in understory plant communities — herbs, plants, flowers, ferns,” said Cindy Hale, research associate with the Natural Resources Research Institute at the University of Minnesota-Duluth.

The invasion is happening across the region in deciduous forests, or those that shed their leaves, especially in Wisconsin, Minnesota, Michigan and New York, Hale said.

“Some people think it looks nicer, an open forest with towering trees,” Hale said.  “But while it may be pretty, it’s not the biological norm in these forests – the norm is dense vegetation from the ground up.”

Beginning in the 1700s, Europeans brought the most invasive and ubiquitous earthworms.  They came in the soil used as ship ballast and later were brought for agricultural uses, Hale said.   Dumped fishing bait is now blamed for their spread.

During the last decade or so, there’s been a cluster of Asian species entering the region for composting and gardening.  That’s because worms benefit agriculture for the same reason they hurt forests.

This often pits Hale and her team against avid composters.

“Composting has all kinds of environmental benefits,” said Ellen Sandbeck, owner of Laverme’s Worms in Minnesota. “When you make your own fertilizer with worms, you don’t have to use synthetics which run off into places they shouldn’t be.”

Sandbeck has used the same culture of worms for 23 years and is “very careful” about what she puts in the bin.

Hale doesn’t want to end composting, and has, in fact, bought worms from Sandbeck.

“Composting can be a very good thing,” Hale said.  “Contained systems and learning how to identify species will minimize the threat of them leaving.”

Hale’s research team works with both composters and bait shops to reduce the spread of invasive worms.

“We’re much further along with the fishing bait people than the composters,” Hale said.  “They’re (composters) doing it for a living, so they feel threatened.”

In hot months, the duff is an insulator, keeping soil cooler.  When worms eat the leaf layer, soils warm.  When combined with the already warming climate, this changes the plant makeup of forests, said Lee Frelich, director of the Center for Forest Ecology at the University of Minnesota.

“Soil has a big impact – air temperatures on top of trees are not that big of a deal,” Frelich said.

It’s not only trees that may move north with warming soils.  It could allow earthworms to survive in colder areas, spreading them further north.

Frelich’s team is also researching how earthworms might pave the way for other invaders.  Studies show that worms create a good seedbed for European buckthorn and garlic mustard.

As the fight rages on in courts, lakes and land with other invasives, earthworms remain unregulated in the Great Lakes region.

“There’s an interest in education in the agencies responsible for such things but they’re overwhelmed,” Hale said.  “Agricultural departments are dealing with other things and don’t feel compelled to tackle this earthworm issue.”

University of Minnesota researchers encourage citizens to do some of the dirty work.

Great Lakes Worm Watch teaches people about non-native species and gets them involved in research and conservation.

The project provides tools and resources for people to document worm locations.  The information is fed into a database that identifies the most infested places.

The team kicks off “Big Worming Week” on Sept. 25, which is a push for citizens to work with the Worm Watch team in testing soil, counting and identifying worms.

There are no methods for ridding a forest of worms.  Prevention is key, Hale said.

“Earthworms don’t fly, so if we don’t move them they don’t move fast on their own,” Hale said.

In fact, earthworms move less than a half mile over 100 years, according to the Minnesota Department of Natural Resources.  Therefore, prevention efforts can be very effective.

Many people are taught that worms are great for ecosystems, so it’s a bit shocking to hear about the damage they cause, Hale said.

Earthworms are the worst invasive in the region, Frelich said.  They change the ecosystems of the Great Lakes from the ground up.

“They reengineer the structure of soil – you can’t get more basic than that,” he said.

8 thoughts on “The underground master of invasive species — earthworms”