It’s a horror story: fish and birds wash up dead on the beach, invaders change the environment, poison lurks in the sand. 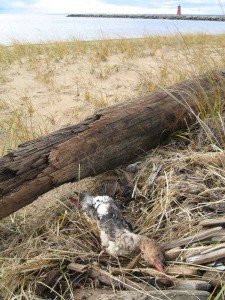 But it’s no story. It’s avian botulism, a toxin that has shown up on Great Lakes shorelines repeatedly over the past 13 years.

“It is by far the most toxic substance on earth,” said Stephen Riley, a research biologist at the U.S. Geological Survey’s Great Lakes Science Center in Ann Arbor, Mich.

Botulism occurs after exposure to the toxin produced by Clostridium botulinum bacterium. It grows in warm environments without oxygen and is so toxic that one gram of the stuff, if dispersed evenly, could wipe out 1 million people.

But the type-e botulism found in the Great Lakes isn’t a human threat. A creature has to ingest the toxin to get botulism, so as long as people avoid eating dead fish and birds gathered from the shoreline, botulism is a wildlife problem.

It is a problem that  first emerged in the Great Lakes in the 1960s when there were excess nutrients in the lakes. Once pollution controls were strengthened by the Clean Water Act, it went away. But in the 1990s it returned when animals like carp, sea gulls and smallmouth bass began washing up on shore.

Why the toxin has resurfaced and how it gets through the food web are mysteries Riley and researchers from the U.S. Geological Survey and the National Park Service are trying to solve. They are studying whether invasive species like zebra mussels, quagga mussels and round gobies play a role.

To find the best places to test for the toxin, the Upper Midwest Environmental Sciences Center in La Crosse, Wisc. tracks the migration and feeding habits of common loons which are often affected by it. 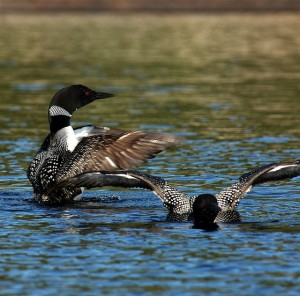 Researchers are studying common loons to find out where to test for avian botulism. Photo: Jackanapes (Flickr)

“They’re hit very hard, so consequently that’s a bird we wanted to focus on,” said Kevin Kenow, a wildlife biologist for the center and principal investigator on the study.

Kenow and other researchers put tags and satellite transmitters on common loons to document where they summer in Minnesota, Wisconsin and Michigan’s Upper Peninsula before flying south for the winter.

The transmitters feed information into a map that tracks the daily migration of each loon throughout the year.

The tags record temperature and pressure so researchers can track how deep loons dive for food. That helps them speculate what they eat and helps decide where to test for avian botulism.

Kenow was surprised that the birds dive to the same depth, meaning they probably feed at the bottom of lakes.

“We know that species like round goby inhabit the bottom, so that might be a tie into that,” Kenow said.

Invasive species could play a role

Round gobies, a fish from Eastern Europe, were first spotted in the Great Lakes in 1990 and are just one of the potential links between avian botulism outbreaks and invasive species. Invasive freshwater mussels, like zebra and quagga mussels, may be another.

“Botulism seems to occur when the lake levels are low and the water temperatures are high,” Riley said.

Mussels help create these conditions. They filter water, allowing in more light that heats water and promotes algae. The mussels’ feces concentrated in the bottom of the lake also provide nutrients to the algae. The algae use up oxygen after they die and decompose.

All the better for botulism growth. But how did the bacterium get here in the first place?

“It’s everywhere,” Riley said. “It’s in the dirt, the sand, the mud in the bottom of the lake.”

Riley said botulism outbreaks happen in every aquatic environment because the bacterium is naturally occurring in the sand and sediment. The bacterium is not harmful on its own, but when it gets in the right warm, oxygen-free environment the toxin starts to grow.

How it spreads through the food chain is what Riley and other researchers are trying to find.

One hypothesis is that mussels promote conditions for toxin growth on the lake floor and that invertebrates ingest the toxins from the mud. Then fish eat the invertebrates and die before washing up on the shore. A bird eats the fish, dies and becomes ridden by maggots, which are eaten by another bird. The cycle continues until someone buries the carcass. 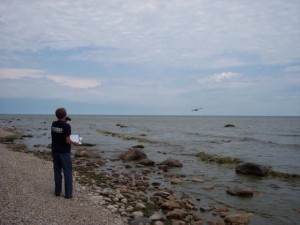 The U.S. Geological Survey’s Avian Monitoring for Botulism Lakeshore Events, or AMBLE, encourages people to walk segments of the Lake Michigan beach in Door County, Wisc., every seven to 10 days. They track what birds, algae, fish and weather they see.

“What AMBLE does is provide them a way to supply data to us about what they’re seeing with regards to bird health and beach condition,” said Jenny Chipault, AMBLE coordinator.

When volunteers come across a “fresh” bird carcass – one that doesn’t smell, isn’t filled with maggots and has intact feathers – they bag it and send it to Madison for testing.

Because the toxin can grow in dead birds and fish, finding avian botulism in a carcass isn’t conclusive.

“The older carcasses might have the toxin, but it might not have been what killed the bird,” Chipault said.

AMBLE data helps researchers look at the transmission of the toxin through the food web. Until they nail down how it works, large-scale prevention methods will have to wait.

“At this point, it’s kind of getting a foothold, getting a good understanding on mechanisms that seem to be driving [avian botulism], and from there devising potential management strategies.” Kenow said.