In the midst of summer beach season, some Great Lakes states are having to pick which beaches they’ll monitor for contamination with what critics say is an unfair distribution of federal funds.

The result is some states, such as Michigan and Wisconsin, having to pick and choose which beaches to monitor. Meanwhile, states like Illinois and Ohio are just able to regularly monitor every public beach – but are hesitant to relinquish funds.

Deciding who gets what

The U.S. Environmental Protection Agency uses a formula to allocate the funds. In order of importance, these factors are considered: length of beach season, coastal miles and number of beach-goers, said Holly Wirick, water quality standards coordinator with EPA’s Region 5, which includes Great Lakes states. For the region, the season is the same – roughly May or June through August.

The Rocky River Park beach in Ohio on the shore of Lake Erie. The state of Ohio receives enough federal funding to regularly monitor all 62 of its beaches. Photo via Wikimedia Commons.

“The more miles they have, the more resources an entity will get to monitor,” Wirick said. “When the program started, EPA didn’t have beach mileage so they used shorelines miles as a surrogate. Over time, as the program developed, [states] were able to submit locational data and the number of miles at beaches, so [the EPA] was able to get more accurate numbers.”

In 2006 the EPA gave states a chance to provide input to make the allocation formula more fair, Wirick said.

“It was interesting because every state had a great reason why they should get more money,” she said. “So in the end, the allocation formula stayed the same. We did try. It does seem equitable except for Michigan.”

Michigan has nine times as many beaches as the state of Ohio and receives enough federal funding to monitor a third of them. But Michigan only receives $60,000 more than Ohio – where all 62 beaches are regularly monitored.

Learning to “get by” with insufficient funding

Federal funding is especially important because for many states, such as Wisconsin, it’s the only funding the state gets to monitor beaches for pathogens that could make swimmers ill.

It isn’t enough to regularly monitor every beach in the state, said Bob Masnado, a water expert with the Wisconsin Department of Natural Resources. The lack of funding forces Wisconsin to prioritize, he said.

“Annually, we work with local health departments to divvy out as much of the beach grant as we can to monitor those beaches that are a high frequency, as specified by their use,” he said. “To fully fund this program in Wisconsin, we estimate about $400,000 would be needed and that’s under the current design.”

“We don’t have enough money to pay for the beaches with that change,” he said. “We took 25 high priority beaches out of our list and we said to the health departments that managed them, ‘We will divvy out or split up remaining money proportionally so you can sample during holiday weekends.'”

Some communities are providing the funding themselves, Masnado said.

“Our state right now is not interested in funding [beach monitoring programs],” he said. “We have many progressive communities that are engaged. We’ve got success story after success story of problem beaches that have been remedied through the help of the program and the locals came up with additional supplemental money.”

“We could always use more money” 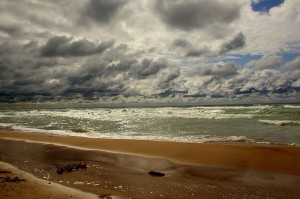 A beach along Lake Michigan in Harbert, Michigan. While Michigan has more shoreline miles than other states, it only receives minimally more funding from the EPA. Photo via Wikimedia Commons.

The EPA’s allocation of funds might not be fair for every state, said Justin DeWitt, chief of general engineering with the Illinois Department of Public Health. But the EPA considers a large variety of factors and makes a fair effort to distribute funding to the states that need it most.

“I think it attempts to fairly associate population and beach attendance, beach miles and tries to factor in and properly weigh all those things and generate a number that works for the large majority of the people who use the program,” he said.

DeWitt said while Illinois has fewer beaches than a state such as Michigan, there are more people using those beaches. He recognized that there are five or six other states with many beach miles but fewer populations – but it’s difficult to find a formula that satisfies everyone.

“[The EPA has] looked at the allocation formula and realized that, to tweak it to accommodate the few outliers, it affects other states,” he said. “It’s hard to make everybody happy.”

Although Illinois can afford to monitor each of its Great Lakes public beaches, DeWitt said, frequency of monitoring and stretching those federal dollars remains a challenge.

“Is it sufficient to do all the things we’d like to do? No, it’s not, but we try to stretch those dollars as far as we can,” he said. “I think we do a good job with that, and it at least allows us to maintain what we feel is a minimal level of monitoring.”

Ohio faces a similar problem of balancing funding with frequency of monitoring, said Mary Clifton, the recreational program manager with the Ohio Department of Health.

Clifton said Ohio has some of the most regular monitoring of any of the states receiving federal funding.

“One thing I’m pretty proud of in Ohio is that we do more sampling and monitoring than almost all the other states,” she said. “We don’t wait for a bad quality to re-sample. I think you’ll find that’s one of the highest numbers we have and we don’t really receive a whole lot of money. I think the EPA is getting the best bang for their buck with Ohio.”

Also similar to Illinois is the population of beach-goers in Ohio, compared to the number of beaches available, Clifton said.

“Lake Erie is the shallowest and warmest lake and mostly used,” she said. “We have the most interaction for public health. You get to northern Michigan and the Upper Peninsula and not too many people are in Lake Superior for recreational purposes.”

Despite inequalities in funding, Masnado said he’s seen a great deal of positive interaction between the government and local communities.

“The people that live and recreate really trust the people that are in their community,” he said. “People want to say government is a nuisance or problem. This is an example where, with some federal assistance, a lot of communities have come together in a unified way.”