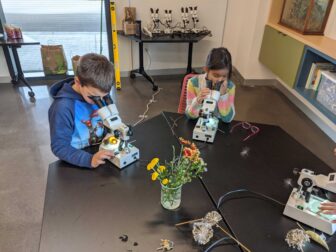 In the heart of Minneapolis are black-eyed Susans, prairie phlox and partridge pea plants observed by the most unlikely ecologists – children and their parents.

Since 2019, just over a dozen inner-city families have cared for small prairies full of native plants in the boulevard strips adjacent to their homes. The project is aimed at  increasing urban biodiversity. It is called City Backyard Science and is funded by the University of Minnesota Institute on the Environment.

“The idea was to give kids long term engagement with the natural world to let them grow a relationship with the natural ecology around their house,” said John Benning, project co-leader and botanist. 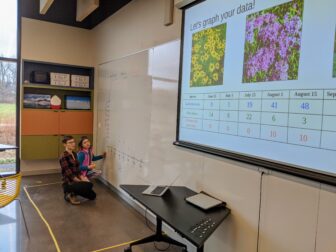 The green space in Minneapolis, though more plentiful than other cities, lacks biodiversity, Benning said. The dominant ground cover in the city is turfgrass, a monoculture mixture of common grass species.

“Turfgrass is almost a nonfunctional ecological space in that it just can’t support any kind of biodiversity on any meaningful level,” he said. “It essentially acts like a concrete block.”

“In general, urban environments are a lot hotter and have higher carbon dioxide and pollutant levels than non-urban areas,” said urban ecologist and City Backyard Science co-leader Amanda Gorton. “Cities are a proxy for climate change.”

The plants in the project’s raised beds attract pollinators and other insects and help filter runoff with their deep roots. They do not have to be mowed nor watered as frequently as turfgrass, which saves water and reduces air pollution from lawn mowers. 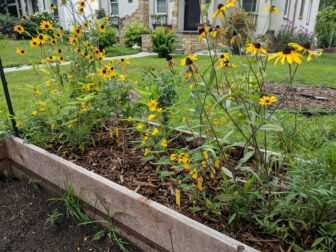 Black-eyed Susans are one of the many plants native to Minnesota. Image: John Benning

“From the aesthetic side, turfgrass is very ugly and boring,” Benning said. “Native habitats, which are fairly easy to put in, are both beautiful to look at and ecologically interesting to explore.”

Before City Backyard Science, Benning and Gorton visited farmers markets and other community gatherings around Minneapolis to teach people about urban ecology. But those interactions were short, one-time encounters.

“You can reach a ton of kids at the farmers market for maybe 15 or 20 minutes each,” Benning said. “But another way to approach it is by bringing the science to their houses. The idea was that by bringing these native plants to the kids, they can look at them any time. There’s just a constant presence.” 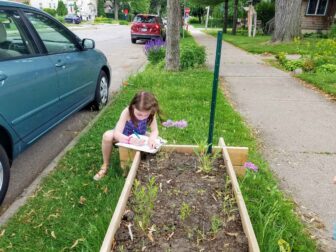 One of the goals of City Backyard Science is to show kids that science can be as simple as observing a backyard. Image: John Benning

In 2019, Benning and Gorton constructed raised beds for native plants at the homes of thirteen Minneapolis families. The pair used Nextdoor, a networking application for neighborhood communities, to gauge interest in the project. The idea was so popular that they turned away 90 percent of the interested families, Gorton said.

“We had over 100 families contact us. But it was just the two of us, so we could only accept a dozen.” 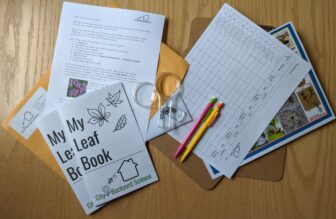 The materials supplied to the 13 families who installed native plant beds in their Minnesota yards. Image: John Benning

Accompanying the raised beds were activities like scavenger hunts and nature observations to engage and familiarize parents and children with ecosystem science.

“For adults, having this education will make them more engaged citizens,” Gorton said. “When they see a similar environmental program on the ballot, they’ll be more likely to vote and participate in it. For kids, there’s a perception that scientists are always in the lab pouring liquids in tubes. But we want to make it clear that science can also be going out in your yard and watching bees. There’s a broader diversity of what science is and who scientists are.” 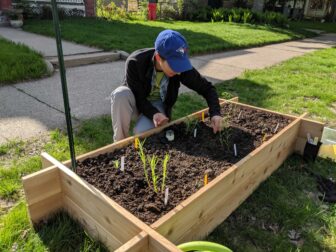 Though the project officially ended in 2020, community members still care for the plant beds. The City Backyard Science website will become a resource available to people beyond the project’s participants, Benning said. Guides on converting lawns to natural habitats, botanical and entomological education and regular posts are some features that will soon be included.

Apart from how-to guides and educational materials,  Minnesota subsidizes citizens to install rain gardens and rain barrels for water conservation. Tax rebate programs are another good way to incentivize citizens to convert their lawns to environmentally friendly “natural history museums,” Benning said. In an attempt to conserve water, Los Angeles has implemented a program that pays citizens $2 per square foot of turfgrass lawn replaced with California-native and drought-tolerant plants.

The future of Minneapolis and other cities may not be bright green turfgrass, but rather native gardens buzzing with pollinators and citizen scientists.