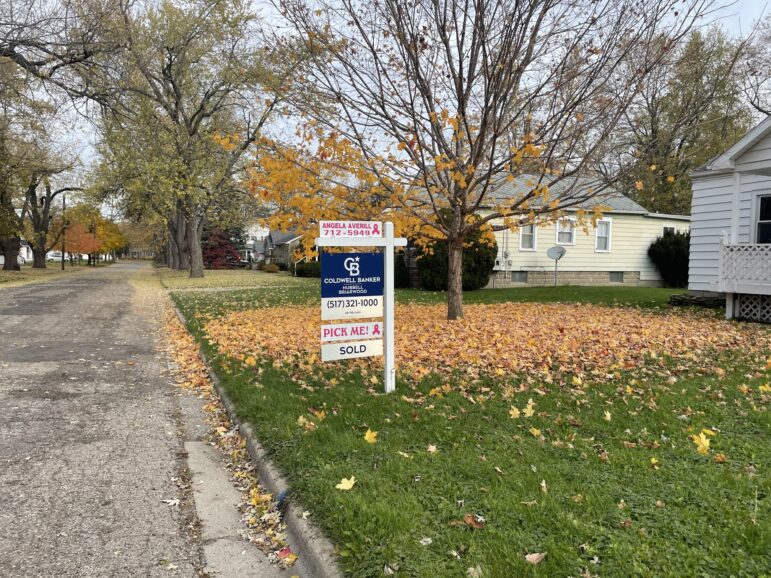 A house for sale in Holt. The community eight miles south of Lansing is rated as most affordable in a recent study of Michigan small cities. Image: Payton Wells

HOLT – It’s easy to see the charm of this idyllic close-knit community that Holt resident Paul Pirrotta said he loves so much.

It has a farmers’ market, small businesses with houses snuck between and every service a resident would need along Cedar Street, the community’s main thoroughfare.

There are even new housing developments going up south of Cedar Street. 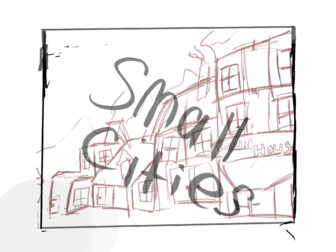 Small cities across the nation are filling up, according to a national study by WalletHub, a personal finance organization.  In Michigan this growth affects small rural communities like Holt, about eight miles south of Lansing, and mid-sized cities that lay just outside of Michigan’s metropolises, like Southfield near Detroit.

But Holt and Southfield sit on opposite ends of the spectrum when it comes to affordability, one of five measures the study used to rank the desirability of small cities. (The other measures are economic health, education and health, quality of life and safety.)

Holt was among the top-five most affordable in Michigan, while Southfield sat near the bottom.

The study based affordability on median household income, cost of living, homeownership rate, housing costs and the number of households in which housing was a financial burden. Housing value and homeownership were large parts of what made a city affordable or not.

What’s keeping homeownership out of reach for many Southfield residents isn’t cost, it’s the demand for housing, according to David Ross, the vice president of mortgage sales at John Adams Mortgage –– a lending company based in Southfield.

“Right now, nationally, [there’s] a lack of housing inventory to buy,” Ross said. “So, because of the highly competitive market where there are bidding wars, someone that needs a mortgage is put in a disadvantage to buy.”

The high demand and low supply of housing makes cash offers more desirable over mortgages, making it harder for mortgage-holders to buy a house. Ross said that right now, because of these bidding wars, the median price of a home in Southfield is about $200,000 –– $44,300 more than the 2019 data showed.

This housing shortage is reaching Holt too, where the median price of a home has also risen to about $200,000, said Holt realtor Bruce Carpenter. He said the COVID-19 pandemic exacerbated this shortage, because at the height of the pandemic, people weren’t putting their houses up for sale.

He said right now he has about three to four buyers per house and buyers must look at and make offers on more homes to hopefully secure one.

“So it is a lot harder to actually get a home at this point,” Carpenter said.

But it may be easier in some communities compared to others because of factors other than supply and demand.

Along with the price of a home, property taxes factor into the cost of living.

Property tax rates for homes in Southfield are twice  as high as the state average of 29.9 mills –– Southfield’s was 62.50 mills, according to the Michigan Department of Treasury. This means while the average Michigan resident paid about $42 for every $1,000 of assessed value, Southfield residents paid $62.

In absence of property taxes and the recent bidding wars, Southfield housing costs less per square foot compared to other cities around Detroit.

“There’s more bang for your buck in Southfield, but when you couple that with just what’s happening with the bidding wars and more expensive property taxes, that may make it less affordable,” Ross said.

Matt Webb moved to Southfield in 2014, where he purchased his first home.

“It was actually really affordable compared to other houses we looked at,” Webb said.

Webb’s house sits on an acre of land, and he said that even with the land, it was affordable. Throughout Southfield the lots tend to be bigger as well, he said.

According to Investopedia, a website that publishes financial advice, lot size can impact the value of a property. But the higher a property is valued, the more taxes the property owner pays.

Compared to Southfield’s high property taxes, Holt’s were lower at 52 mills –– which was still higher than the state average.

Holt is a “perfect community,” Pirrotta said. The taxes don’t make Holt unaffordable, but they do pay for a high quality of life, he said.

Pirrotta should know, he moved to Holt twice in his life. He initially moved to Holt in the 1960s as a middle schooler but moved to Lansing after graduating high school. He moved back in 2003 because of the newly built Holt High School.

So, while Pirrotta admits Holt’s taxes are high –– about 10 mills higher than the state average –– he says they are well worth it. These taxes pay for services like the high school that tempted him to return

“It takes money to make a community work,” said Pirrotta, who is also the president of his neighborhood’s homeowners’ association.

Holt has its own police force contracted through Ingham County and its own fire department and ambulance service, he said.

This could be the reason small cities like Holt are growing. Pirrotta said the new developments are already filled up.

Livonia, another of the most affordable cities, according to WalletHub, has lower taxes compared to Southfield and Holt. That’s part of the draw, said Livonia City Council President, Kathleen McIntyre.

“Part of it is our low tax rate,” McIntyre said. “When you look at what you pay in property taxes that’s a big consideration for people when you’re buying homes.”

Livonia has a property tax rate of 39.3 mills, which is lower than the state average and the lowest of the mentioned cities.

It’s not just Holt that’s growing.  Rochester Hills, another of the most affordable cities in Michigan, attributes its growth to affordable housing, like apartments and condos, said Mayor Bryan Barnett.

Single-family homes and the creation of suburbs have been increasing since World War II, Augst said. There’s an incentive for this, because when suburbs are built, community wealth is created.

But this trend isn’t matching up with the modern lifestyles of many looking for housing, he said.

“We are seeing more [people] living on their own, or with less kids, or living in a non-traditional nuclear family,” Augst said, “But we aren’t seeing an increase in these non-traditional homes available.”

As more non-traditional homes are desired but not built, rent increases, but wages don’t, Augst said.

Rochester Hills saw a 5% increase in population from 2010 to 2019, according to the US Census Bureau. Barnett said he sees that trend continuing and increasing –– at a 7.5% growth rate with 2020 and 2021 accounted for.

This is the second-highest increase for the most affordable places to live, falling right behind Troy, which had a 3.9% population increase from 2010 to 2019, according to the US Census Bureau.

“We are seeing more density in places that are generally more affordable.” Barnett said.

“Affordable housing, on one side, brings density and density lowers the price for a unit,” Barnett said. “On the other side, it brings traffic and it brings congestion, so you have a real balancing act to try to make sure you’re addressing and dealing with both.”

“Systemic racism, racial inequalities, intersect with income and wealth, which of course then affects housing,” Carpenter said. “So, areas with more people of color on average have lower income.”

Holt, a predominantly white community, has homeownership rates almost 1.5 times higher than Southfield, a predominantly Black community. There was also a $10,000 income disparity between the two cities –– the median household income in Holt was $66,316, in Southfield it was $55,704, according to the US Census Bureau.

Historic policies limit Black homeownership today, Carpenter said. Redlining, a practice that took place mainly in the 1960s when certain areas were deemed “unsafe” based on how many people of color lived in it, and then were divested in.

“Impacts of those earlier racist policies are still manifesting,” Augst said. “So, it’s sort of like the snowball just keeps rolling and it’s really hard to reverse that momentum that was started decades ago.”

Both Augst and Carpenter agree that more affordable housing is needed in certain areas. More resources like housing vouchers are needed, they said.

“It’s not like food stamps, where every grocery store is required to accept them,” Carpenter said. “Housing vouchers can be rejected, so as a result, we end up segregating lower income individuals together and creating lower income areas and making higher density housing less affordable than it would be otherwise.” 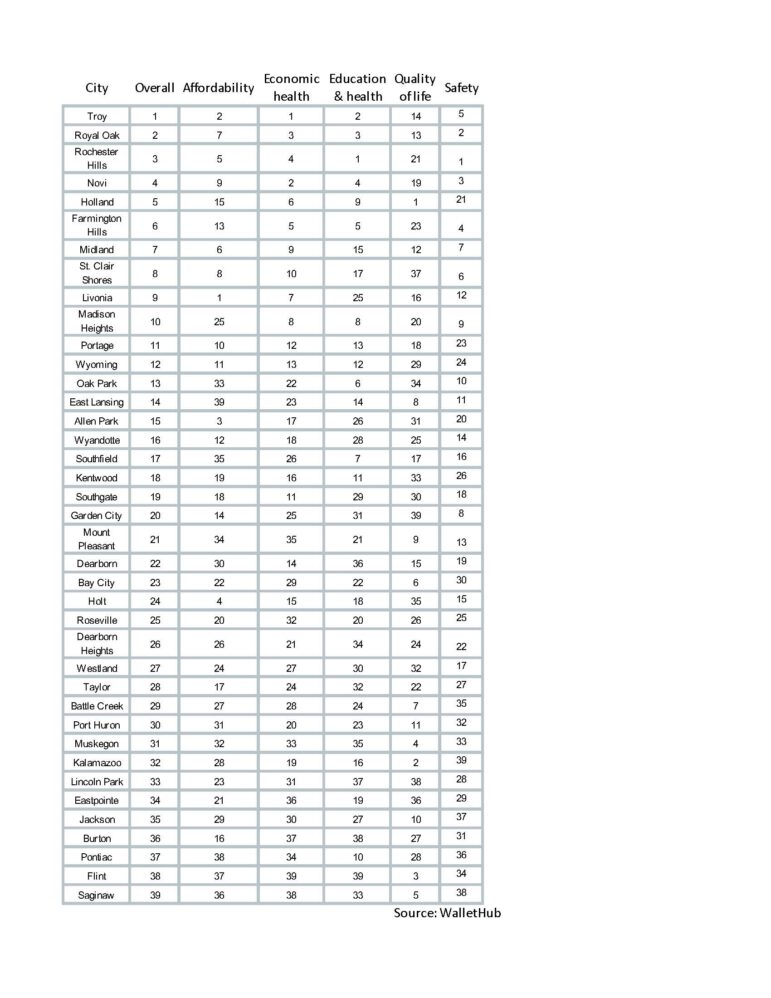