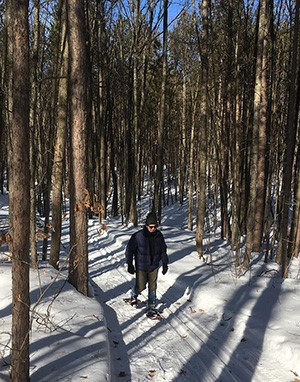 A snowshoer on the trails of North Higgins Lake State Park. Image: MichiganTrailMaps.com

Some trails are just better in the winter.

Like Beaver Creek, a 6.5-mile loop in Michigan’s North Higgins Lake State Park that begins at the Civilian Conservation Corps Museum and extends north to its namesake stream.

Last summer, many hikers and trail runners were disappointed with the newly constructed crushed-gravel path on the west side of the loop and the recent logging activity it passes through. Clearcuts and gravel were not the natural settings they were seeking.

If so, then come back in the winter. All is forgiven.

After the first heavy snowfall, gravel becomes a groomed cross-country ski trail wide enough for snowshoers to use it without marring the carefully laid tracks.

In February, the patches of clearcuts appear like white meadows covered with prints from whitetail deer and coyotes to porcupines and snowshoers who can’t resist romping through the deep, unbroken snow with their rugbeaters, as snowshoes are nicknamed.

Most people arrive in the summer and combine a hike with a visit to the CCC Museum and the Higgins Lake Tree Nursery in Roscommon.

Faced with ravished land cut and burned over during Michigan’s logging era, the Legislature set up the first state forest in 1903 in Roscommon and Crawford counties. The lawmakers then established the Higgins Lake Tree Nursery, staffed in the 1930s by the CCC.

A statue pays tribute to the work of the Civilian Conservation Corps at North Higgins Lake State Park. Image: MichiganTrailMaps.com

The young Corps members were housed 5 miles away at Camp Higgins Lake and traveled to the nursery every day by truck.

In the summer, they extracted and planted seeds from pine cones and shipped the seedlings throughout northern Michigan and the Upper Peninsula. In 1933 alone, almost 10 million pines were planted on 17,656 acres of cutover state land.

The nursery closed in the early 1960s but has since been restored as a historic site.

In 1985, CCC alumni spearheaded construction of the museum, a reproduction of a Camp Higgins Lake barrack. Inside, visitors learn, among other things, that Corps members could not pick their season and spent the long northern Michigan winters in those barracks when not plowing area roads or harvesting ice.

The museum is closed after September but many skiers still begin their outing by striding through the nursery, stopping to read outdoor displays or peek through the windows of the historic buildings.

The loops begin in the hilly section of the park as a moderately rolling trail that climbs to post No. 2 and then descends to Post No. 3 at Mile 1.4, the start of the Beaver Creek Trail.

Gone are the hills, and within a mile so is the wide, crushed gravel trail, replaced by a natural footpath through the woods.

The next 3 miles are the backcountry section of the trail system, an easy ski through a forested lowland featuring some impressive pines. Twice you cross Beaver Creek and then skirt the wetlands that the stream flows through. 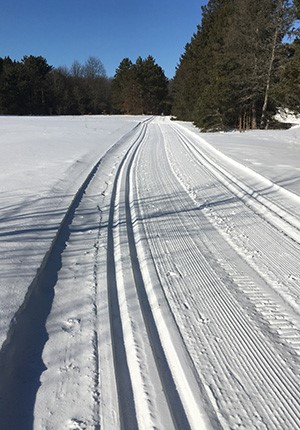 In spring and summer, this can make for wet and muddy conditions. In the winter, the wetlands are a joy to ski and a great place to spot wildlife, particularly deer.

At Mile 4.8, a junction marked by post No. 6, you return to the Bosom Pines Loop with its rolling pines and groomed trail. You enjoy a steep downhill run and then face a long slog to the highest point of the trail system at 1,300 feet.

Enjoy the view of Higgins Lake from up here and take time to check out the remains of the Cistern. The 105,000-gallon underground concrete tank was built in 1911 for irrigation of the Higgins Lake Nursery.

A ram pump moved water from a pond near Higgins Lake uphill into the cistern and gravity returned it to irrigate the seeds and tree beds below.

Experience that gravity in the final leg to the parking lot, a half-mile, 120-foot descent that, in the winter, is an effortless and enjoyable glide on a well-tracked trail.

North Higgins Lake State Park has been added into the Iron Belle Trail’s 828-mile bike route from Belle Isle to Ironwood. Called the Cradle of Forestry Heritage Trail, the Department of Natural Resources completed the first phase of this 20-mile segment in 2017 with a 2-mile paved path along North Higgins Lake Drive to the CCC Museum Trailhead,

Last summer a crushed, gravel path from the museum was incorporated along the west side of the Beaver Creek Loop. Plans call for continuing it north to the paved Grayling Area Community Pathway and an existing spur to the Forest Visitor Center at Hartwick Pines State Park near Grayling.

When finished the Heritage Trail will link the two museums and feature enhanced interpretive signs depicting the state’s forestry history.

Jim DuFresne is the editorial director at MichiganTrailMaps.com and a Michigan State University School of Journalism alum.