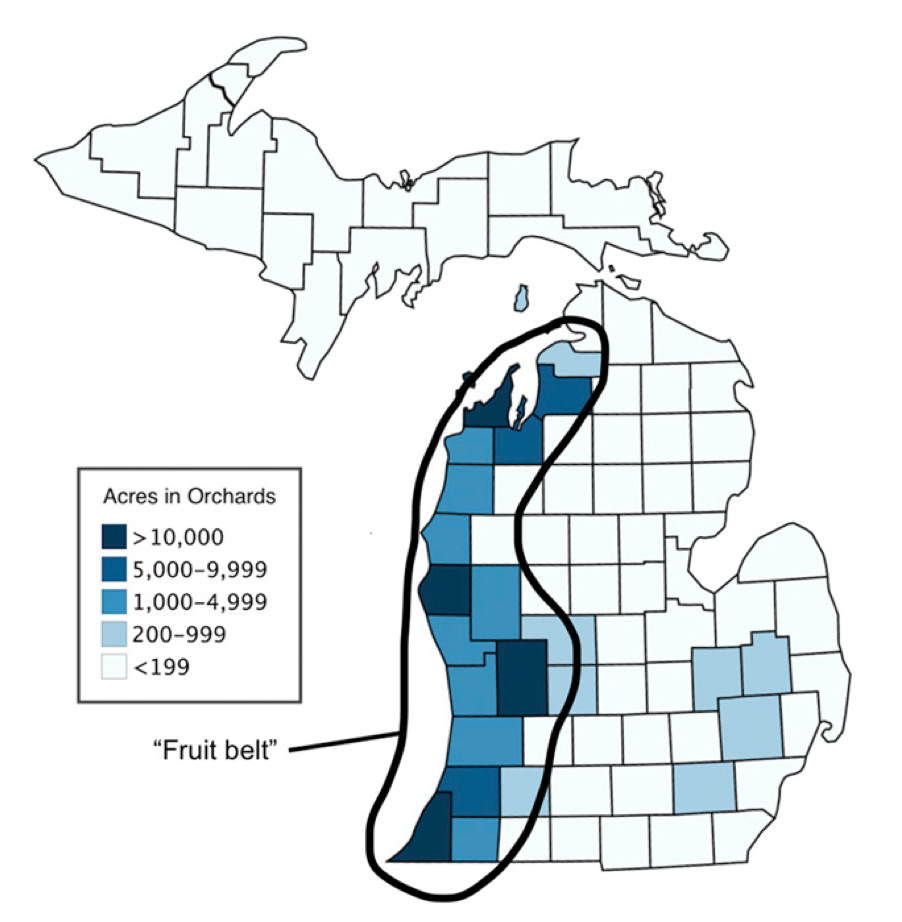 The distribution of orchards throughout Michigan. Outlined, the west coast of the state along Lake Michigan is typically referred to as the “fruit belt” because of its high concentration of orchards and fruit production. Image: From “Uncertainty in the ‘New Normal’: Understanding the Role of Climate Change Beliefs and Risk Perceptions in Michigan Tree Fruit Growers’ Adaptation Behaviors” by Linder & Campbell-Arvai, WCAS, 2021. © American Meteorological Society. Used with permission.

Farmers are set to take on a growing number of challenges in the face of climate change.

The resiliency of Michigan’s economy and agricultural sector largely depends on how easily farmers can adapt their practices, said U.S. Sens. Gary Peters and Debbie Stabenow of Michigan after the Senate passed the Growing Climate Solutions Act earlier this year.

Now waiting to be passed in the House, the bill would make it easier for farmers to participate in carbon markets to reduce greenhouse gas emissions.

In a recent study of attitudes of West Michigan fruit growers, Julia Linder, a graduate of the University of Michigan’s Program in the Environment, explored the factors that influence how fruit growers adapt to climate change. She currently works as a research assistant at Michigan Medicine.

The goal of her project was to determine the influence of climate change beliefs and perception of climate risk and adaptive actions on management practices used by tree fruit growers.

The study involved 18 interviewees ranging from first-generation to fifth-generation growers with from 5 to 2,500 acres of fruit trees. It appeared in the journal “Weather, Climate and Society.”

“What we would’ve call ‘normal’ is no longer normal – so everything is becoming the new normal, if you will,” one grower said.

Laura Campbell of the Michigan Farm Bureau also identifies climate change as the biggest challenge faced by farmers because of its far-reaching effects on nearly every aspect of what they do. 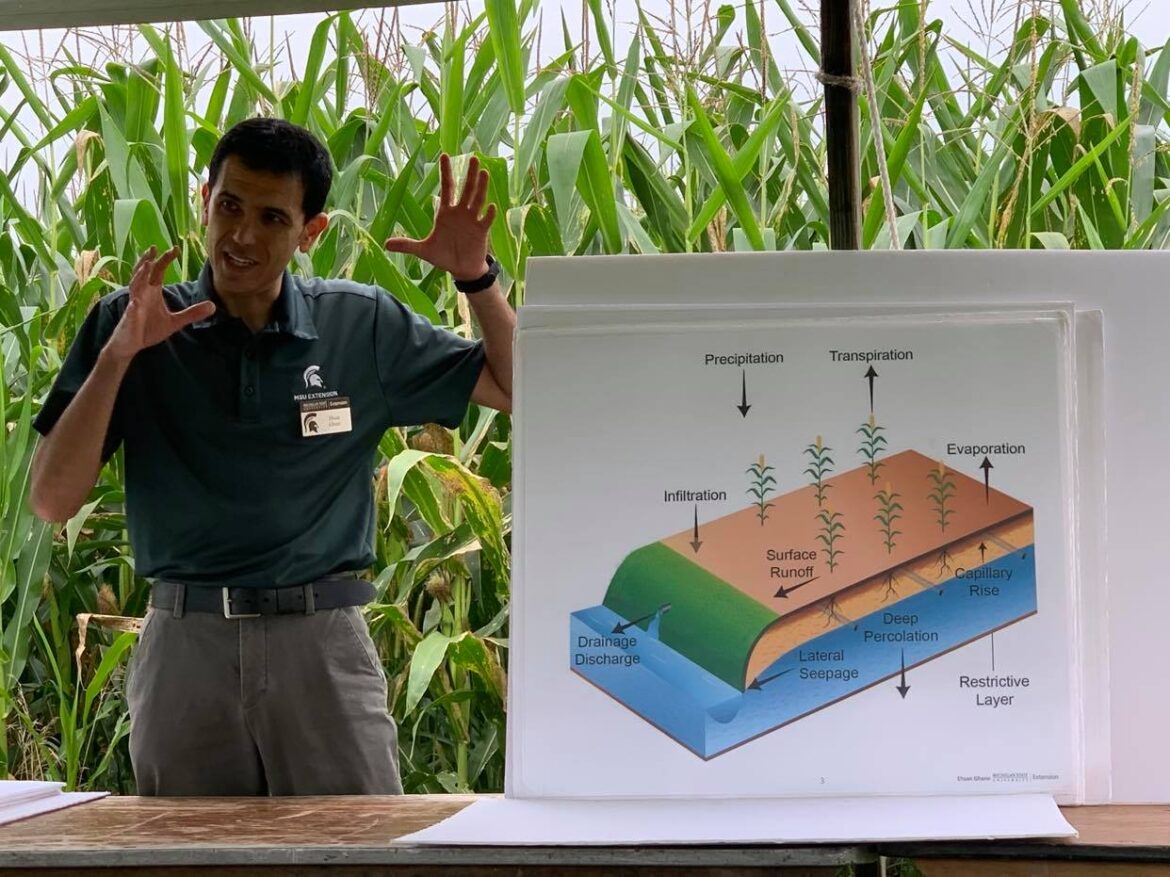 Campbell, who manages the organization’s agricultural ecology department, said the public lacks familiarity with the inner workings of the agricultural sector, and that makes it difficult for them to conceptualize just how daunting climate change can be for farmers.

“People who don’t farm don’t understand why,” she said.

Bill Schultz, a fruit grower in Mattawan, Michigan, has been farming his whole life.

His 250-acre family farm, Schultz Fruitridge Farms, is celebrating 70 years since his grandparents founded it in 1951.

Like many other growers interviewed for the study, Schultz has noticed increasing variability in seasonal weather patterns and says he must adapt accordingly.

“In the last five years, what I see as a grower is that the jet stream is becoming very anemic, and that causes a lot of other events to happen that don’t typically happen that frequently,” Schultz says.

That’s because perennial tree fruit crops are very susceptible to changes in temperature and weather patterns, unlike field crops such as corn, Linder’s study says.

Fruit trees in Michigan and other cold-weather locations in the Midwest and Northeast have adapted to undergo a winter dormancy period in which a tree stops growing to protect itself from frost damage.

Campbell said the growing unpredictability of both temperature and frost is a threat at the beginning of the season: An early spring warmup triggers the growth of blossoms, making them vulnerable to a frost event later in the season.

When blossoms die due to frost, the crop for the entire season is lost.

“Spring frosts are probably one of our biggest challenges,” Schultz said.

He recalled the devastation that followed the unprecedented warm up of March 2012 when temperatures reached 80 degrees Fahrenheit, then plunged back down to below freezing.

“We lost everything. I lost my job that year. I still had work to do, but we had no income. We laid everybody off, we had to take out a loan to pay our bills. It set us back years,” he said.

Linder says that orchards require a long-term commitment and investment of a couple of decades because they are perennial.

Another study interviewee said, “In the row crop business it’s easier to see change, but in the fruit industry, we raise the same commodity for 25 years.”

That grower made it clear that adaptive behaviors are important to preserve the viability of that and future seasons’ crops when they rely on the same trees for decades.

Such methods are used in reaction to weather events, but can have limited effectiveness, he says.

“The goal is to increase a tree’s resilience to climate change,” she said.

There’s still much climate change research to do about perennial agriculture, she said.

They also opened a farm market and a farm-to-table restaurant where they sell their hard cider, donuts and craft beer.

That provided Schultz with a fallback if one of his crops were damaged for the season, but not all growers have the financial capability for such long-term preparations.

“Because it’s so much longer-term, there’s a large sense of uncertainty as to how climate in five, 10, 15, up to 20 years will look like and how growers can address [changing climate] now on their farms that will help them in those extended time periods,” Linder said.

It doesn’t come down to whether growers attribute climate change to anthropogenic – influenced or caused by human activity – causes, Linder added.

Campbell said of farmers, “They’re like any other population group. There’s no monolithic single opinion on how much of climate change is influenced by people.”

Linder wrote in the study, “Adoption of adaptation behaviors may depend less on belief in climate change than on an individual’s belief that they can adapt in a way that will adequately protect them from perceived risk.”

In other words, if growers aren’t confident that certain adaptive behaviors will be effective in protecting their crops, they won’t adopt them, sticking with methods they’ve traditionally used.

Linder said she noticed a lot of pessimism among growers that she interviewed when discussing their ability to adapt while responding to increasing weather variability. “On the flip side, something that was very clear was that there is a large sense of community between growers.”

Schultz said, “It’s very demoralizing. It doesn’t matter how smart, how good you are at your job. You can’t counteract Mother Nature.”

That’s where Linder suggested that university Extension programs participate in successful grower-led meetings and conferences, while shifting the focus toward the effects of climate change and how to address them.

“Addressing a lot of these climate changes is going to require collaboration – not only between growers and Extension workers, but also between growers themselves,” she said.