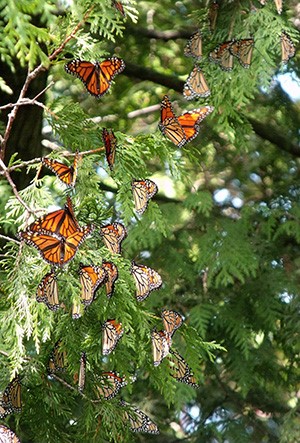 Monarch butterflies use Peninsula Point in the Hiawatha National Forest as a staging area before crossing Lake Michigan on route to Mexico. Image: Michigan Department of Natural Resources

From mid-August through September, Peninsula Point in Michigan’s Upper Peninsula is known for “monarch madness.”

That’s when huge numbers of the distinctive orange butterfly migrate from Minnesota, Wisconsin and the U.P. south to Mexico, a 1,900-mile journey for an insect with a wingspan of less than 4 inches.

Waves of monarchs use Peninsula Point as a staging area before attempting the long open water crossing of Lake Michigan. At the peak of the migration in early September a decade ago, you could witness 3,000 or more monarchs fluttering in a handful of trees at this Hiawatha National Forest day-use area at the end of Stonington Peninsula.

Since then, climate change and deforestation of the insect’s mountainous winter habitat in central Mexico has greatly harmed the monarch population. It’s estimated that the Eastern species has declined by more than 80% since the 1980s, but it’s still an amazing migration. And it’s best seen today in Michigan at Peninsula Point.

Can’t make it for the monarch madness? Come whenever you can.

This small spit of land is loaded with history, excellent birding opportunities and a lighthouse that visitors can climb for a watery panoramic of Lake Michigan. 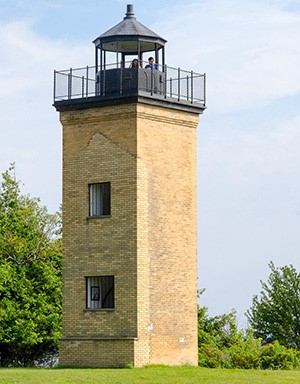 The brick lighthouse at Peninsula Point is now listed on the National Register of Historic Places. Image: Michigan Department of Natural Resources

The centerpiece of the day-use area is Peninsula Point Lighthouse.

Congress authorized its construction in 1864 because wooden sailing ships, hauling lumber, iron ore and fish from Escanaba, Gladstone and Fayette, were no match for the treacherous shoals that separate Big Bay de Noc from Little Bay de Noc.

The structure was built in 1865 and consisted of a 40-foot tower, lit by an oil lamp and reflectors, and an adjoining home for the lightkeeper and family.

The light went out for the last time in 1936, but the view from the point was so spectacular that the U.S. Forest Service converted it into a public picnic area in 1937. The lightkeeper’s house burned to the ground in 1959, but the brick tower survived and today is listed on the National Register of Historic Places.

Peninsula Point is also an important migration stopover for birds traveling up the Lake Michigan shore. Spring migrations can be exceptional, a time when birders can sight more than 200 d species.

Much of the point is forested, and winding through the trees or skirting the shoreline is an interpretive trail and a rugged single-lane dirt road. The two can be combined for a scenic hike, a 2.2-mile loop from the RV parking area at the end of the pavement to the picnic grounds that surrounded the lighthouse.
In addition, the nearby Maywood History Trail features an old growth hemlock forest on the west shore of Stonington Peninsula. 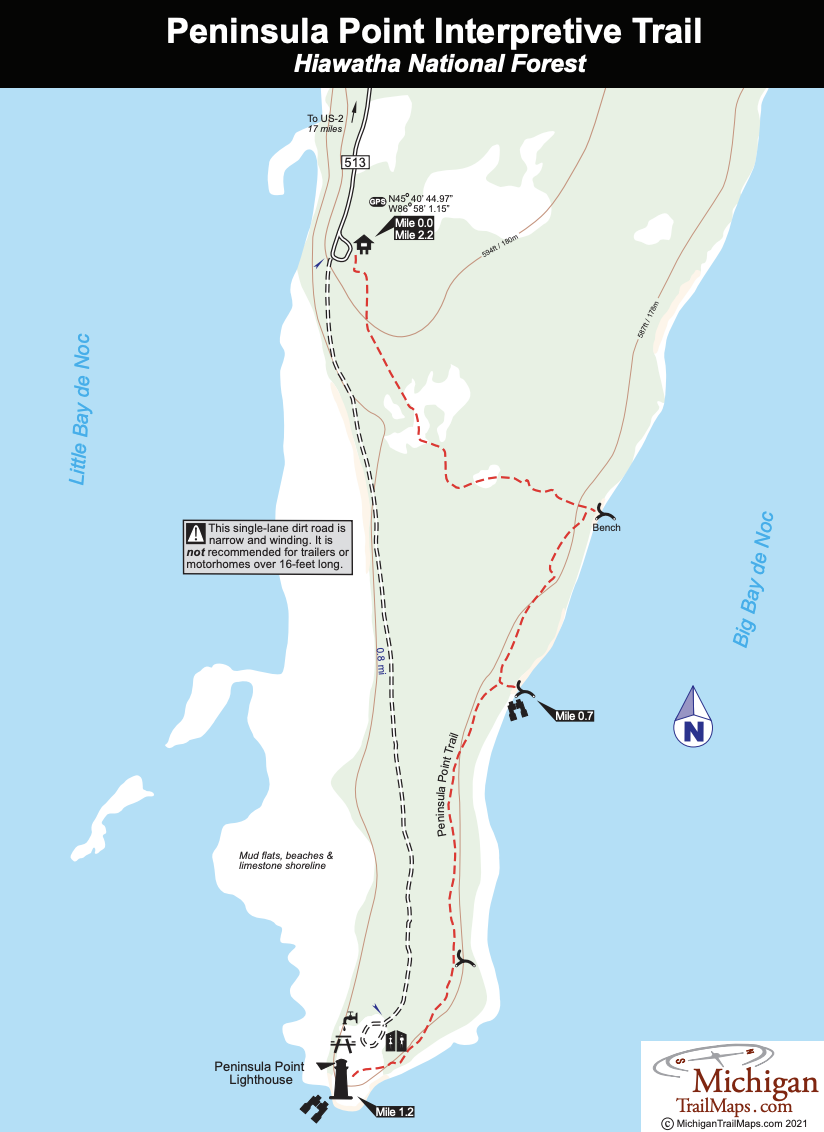