An Ontario shipping company has agreed to pay a $500,000 fine and to implement an environmental compliance program after accepting responsibility for the illegal dumping of 11,887 gallons of oily bilge water into Lake Ontario.

Algoma Central Corp. of St. Catharines pleaded guilty in U.S. District Court in Buffalo to a misdemeanor for a criminal violation of the Clean Water Act.

The U.S. Attorney in Buffalo, James Kennedy Jr., said the penalty “ensures that this company will be monitored in the future and will be strictly obligated to comply with those environmental laws and regulations that protect our waters, our fisheries, our wildlife and each of us.”

The June 2017 incident involving the M/V Algoma Strongfield, a new bulk carrier that was being delivered from China where it had been built, according to the charge filed in federal court.

A Dutch company had crewed the Strongfield across the Pacific Ocean and through the Panama Canal. During the voyage, unprocessed oily bilge water accumulated, and an Algoma Central employee ordered it to be stored in a used wash water tank, the U.S. Attorney’s Office said in a news release. 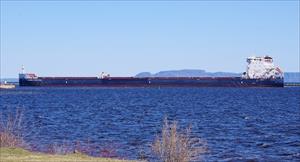 An Algoma Central crew took over when the ship arrived in Sept-Iles, Quebec, but the company failed to tell all of the new sailors and inspectors about the contents of the wash water tank. The captain, who was unaware of the contents, gave permission to empty the tank into the lake, but stopped the process when an employee told him about the oily bilge water, the release said.

The company then notified U.S. and Canadian authorities of the incident, leading to a U.S. Coast Guard investigation.

The plan includes monitoring, training and reporting requirements and allows the Coast Guard to board and inspect the vessels whenever they are in U.S. waters.