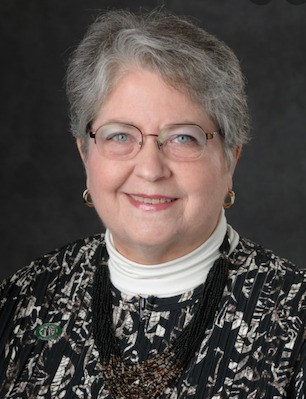 One of the delights of Michigan State University’s Fate of the Earth conference is the dinner for organizers and speakers the night before.

I always angled to get a seat next to Barbara Sawyer-Koch, a former MSU trustee, who with her late husband Donald Koch, an MSU philosophy professor, endowed this annual conference on sustainability.

It was their support that allowed MSU’s Knight Center for Environmental Journalism to help bring top-flight environmental journalists to speak at the event and later meet with our students.

Barb, who died March 6, was an excellent dinner companion. Her interests were far ranging – music, travel, sustainability, international students and a deep love for MSU. They intersected – she spoke knowledgeably about the impact of climate change that she noticed in her travels. And while we did not know each other well, she thoughtfully remembered to accommodate my hearing deficit during those noisy dinners.

What amazed me was her interest and knowledge of the journalism speakers that the Knight Center helped bring to the Fate of the Earth. She raised points from presentations given a year earlier by the previous speaker. And she spoke with anticipation of the insights she hoped to gain from the next day’s speaker.

She did her homework.

I once noted that the next day’s speaker whom the Knight Center helped secure had one degree from MSU, an accomplishment not particularly required of this event which gathers interesting people, regardless of academic pedigree.

Fate of the Earth brings together environmental scientists and deep thinkers from around the nation to discuss sustainability science and policy. Some might never come together in such a public forum without the support of this event.

But you could tell that Barb had a special fondness for the people working where public engagement intersects with science and policy. She particularly enjoyed the part of the conference where students and community members of diverse backgrounds met with the speakers.

Both Barb and Don shared a deep commitment to sustainability, said Tom Dietz, the former director of MSU’s Environmental Science and Policy Program, which hosts the conference and was founded in 2003.

“Their vision was that sustainability required world-class research that linked across disciplines,” Dietz said. “But it also required engaging that research with undergraduate students and with the larger community to address the urgent problems facing Michigan and the world.

“They were wonderfully generous in making contributions to MSU, including the Fate of the Earth endowment, but even more important was their vision linking research to the community.”

The program was ahead of its time when it started in 2013, said Jiaguo Qi, the current director of MSU’s Environmental Science and Policy Program. “While the international community was still discussing ways to engage stakeholders, the (Fate of the Earth) initiative that Barbara and Don supported was already in implementation phase to connect the local community with academics, setting a great example of knowledge co-creation of the Future Earth mission.”

The Fate of the Earth just lost a friend of the Earth. But it was one who inspired many more earthly friends who have much to say about that fate.