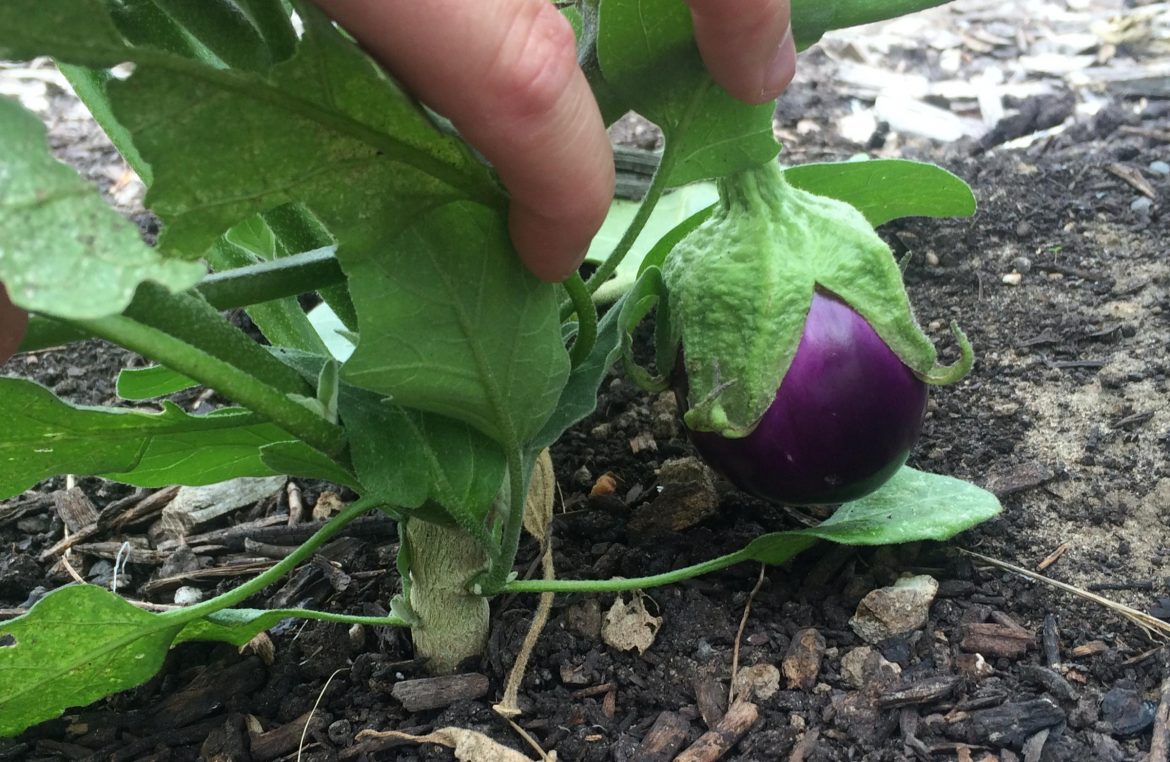 An eggplant starting to grow in the garden. Image: Katie Cook, WKAR.

Throughout human history, gardens have embodied a sense of near-mystical escapism. From enchanted hedgerows in the English countryside to tranquil Japanese gardens, the time-honored art of horticulture shows no signs of stopping.

Now, with the world gripped by COVID-19, public interest in gardening is at an all-time high.

According to Psychreg, the combination of being outdoors and cultivating plants is immensely beneficial for people—especially during the uncertainty of a pandemic.

“Research has demonstrated that spending time outdoors is not only good for our bodies but also our minds. With concerns about food supply, exposure to COVID and increased awareness of the need to eat healthily, more individuals are turning to gardening,” the publication said.

Gardening entails a lot of movement, which reduces the risk of obesity, heart disease and other conditions exacerbated by a sedentary lifestyle.

A study by researchers in Korea found that individuals working with plants reported greater feelings of relaxation than those engaging in computer-based activities.

The culmination of being outside, moving one’s body and working with plants makes gardening an optimal destressor, Psychreg said.

According to the Centers for Disease Control and Prevention, a growing number of people are reporting feelings of stress and isolation. Finding healthy ways to cope is crucial for individual and community wellbeing as the pandemic continues, it said. 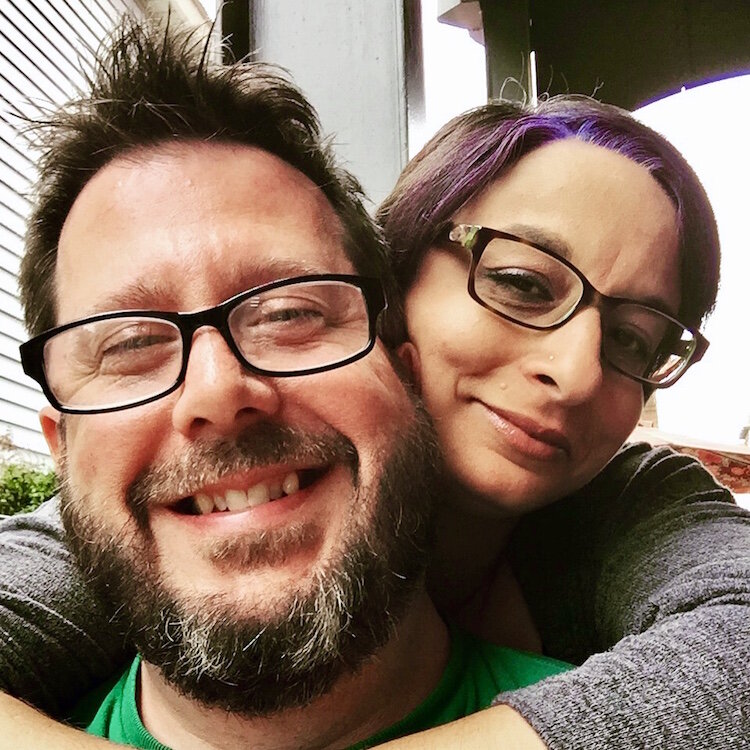 Jaishree Frank and her husband Brad.

Jaishree Frank of Kalamazoo, Michigan, explained how she did just that for both her community and herself with the creation of her “U-Pick Garden,” where she grows thyme, basil, oregano and other herbs.

As manager of the Kalamazoo County Juvenile Home, Frank was considered an essential worker and did not self-quarantine.

“Although my workplace was still open, everything else shut down. I couldn’t hang out with friends, participate in normal activities or really do anything aside from go to work,” she said.

Frank said the reality left her feeling restless and disconnected from others.

Thankfully, she said, communicating with others on the local Milwood Neighborhood Facebook page helped remedy some of these feelings. “I noticed that a lot of people in our community were using Facebook to encourage and provide help to one another. In multiple instances, I saw people use the page to help them receive food donations, hand-me-down clothing for their children or whatever else they needed while they were struggling financially,” Frank said.

People also employed their creativity to raise morale around the community.

Frank reported that, throughout the spring and summer, residents painted rocks with an array of designs. The rocks were then hidden around the area for local children to find.

Neighbors placed a specific item—a rainbow, an Easter Bunny or some other designated object—in their front windows for passers-by to see.

Around the same time, a small yard statue was also transformed into a local icon. “Buddy the Bear,” as residents named the figure, was targeted in a neighborhood-wide game in which he was continually “stolen” from one yard and moved to another—all in good fun, Frank said.

The purpose of those activities was to raise spirits and establish a sense of togetherness for the community. And that’s exactly what they did, Frank said.

“It was such an inspiring thing to see everybody coming together like that. It really encouraged me,” she said.

Frank was motivated to bring an idea of hers into reality: the U-Pick Garden.

“The desire I had to contribute something to my community, combined with all of the downtime that I now had, culminated in me creating the garden. Like its name suggests, people can take whatever they want or need from it,” she said.

According to Frank, the garden has been a huge success in helping neighbors reconnect with one another.

“We really couldn’t get together because of COVID-19. When I planted the garden, though, neighbors could come by and visit while they took some produce for themselves—it was a nice, socially-distanced way to see people again,” Frank said.

The U-Pick Garden became a hit in the Milwood community. Many people praised it, taking to the local Facebook page to discuss recipes they’d created using its ingredients, she said.

Frank explained that, along with promoting this sense of togetherness and neighborhood pride, gardening has sparked a creative renaissance for her.

“The biggest thing the garden has done is helping me to channel my creativity. I’ll combine the herbs from it in all sorts of different ways to see how they smell, then I usually research different health benefits they have and gather that information to put on the Etsy page for my business,” she said.

Shortly after the U-Pick Garden was established, Frank opened her small business, Body Love Garden. Its products include scrubs, bath-bombs and other personal care items—all of which Frank makes using homegrown herbs.

“Creativity really is the backbone of all of this,” she said.

The garden is dormant for the winter—although it will certainly make a comeback in 2021, Frank said. In the meantime, she said, she’s exploring new herbs to plant and planning to expand the U-Pick Garden when spring arrives once again.

The allure of gardening has transcended borders during the COVID-19 pandemic, said Susan Richards, the manager of the New North Greenhouses in Sault Ste. Marie, Ontario.

This past year has been an anomalous success for her shop—and the reasons behind that are clear, Richards said.

“Throughout Ontario, and pretty much all of Canada, people’s interest in gardening has exploded during this past year. It’s because everyone’s been at home in isolation, needing something to focus on and channel their energy into—we’ve seen a huge uptick in new gardeners wanting to grow their own fruits, vegetables and herbs,” she explained.

On top of that, anxieties about potential food shortages further motivated many people to plant their own crops, Richards said.

“Early on in the year, we ran out of everything—potting soil, plant-protecting materials, insecticidal sprays and even the plants themselves—as was the case with pretty much every other shop across the province. The demand for some items, such as trees and shrubs, was so crazy that we’re expecting shortages during this next year,” she said.

According to Richards, people of all backgrounds and skill levels, ranging from veteran gardeners to first-timers, turned to New North Greenhouses to purchase gardening supplies.

Many continued to shop throughout the late summer and into autumn, which is unusually late to begin planting most crops, she said.

Now, however, outdoor gardening is on hiatus. With the ground frozen, everyone in Sault Ste. Marie has put their gardens to “bed” for the season, Richards said.

“Since people aren’t able to travel much or visit loved ones this year, we’re finding that they’re spending more time and energy decorating outside. We’ve opened the Holiday Store for the season, where we carry fresh greens arrangements that go on people’s front porches.

Richards attributes the widespread interest in decorating to people feeling “down” due to the current circumstances and looking for ways to remedy that.

“Just being around plants works wonders for one’s mental wellbeing. That’s why a lot of people, myself included, refer to their garden as their ‘happy place,’” she said.

According to Richards, gardening helps manage the stress of her retail job, as well as contributing to overall improved mental health.

“I’m constantly out in my garden, decompressing from a hard day’s work, and I know lots of other people who do the same. Being in your garden planting new crops, pruning plants or even just standing there and taking it all in is incredibly therapeutic,” she said.

As the pandemic continues, Richards said she expects interest in gardens and plant cultivation to grow even more.

“While we’re not expecting to have another national shutdown in Canada, we continue to have lots of restrictions throughout the provinces. Since COVID-19 not going anywhere, at least in the immediate future, we’re expecting another busy season—perhaps even busier than this last one—as more and more people dedicate themselves to gardening,” Richards said.