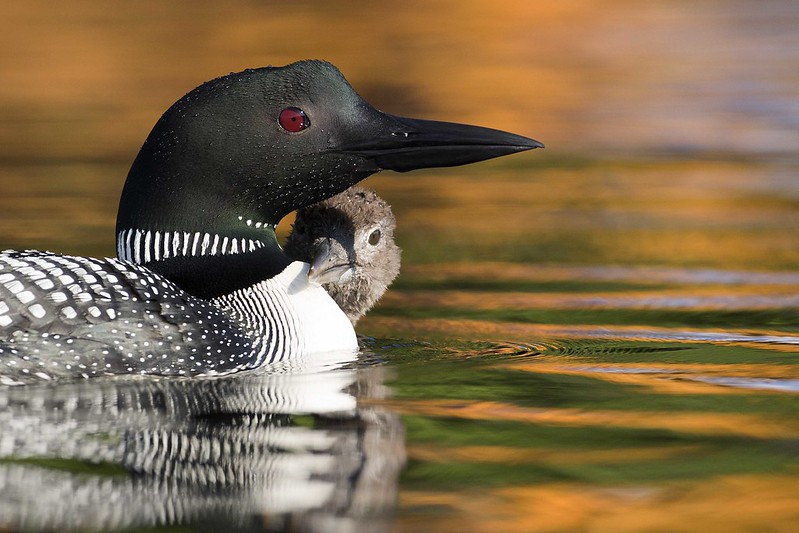 Adult loon with 30 day old young, Ontario. Image: Mark Peck, Flickr. The original photo depicted a loon with a duckling and was replaced with this image on October 30, 2020.

Ontario loons are declining, with fewer chicks being born, according to a new study that took four decades and hundreds of researchers.

The loons’ reproductive success has dropped from the 1960s until today, and the decrease directly correlates with the Great Lakes water conditions, researchers said.

“Loons are really good indicators of the health of the aquatic ecosystem. They are top-level predators, so if there are any contaminants in the water, it directly affects them,” said Kristin Bianchini, a postdoctoral researcher at Birds Canada and Acadia University in Wolfville, Nova Scotia. She’s the lead author of a new study of the problem in the journal Science of the Total Environment.

Researchers began to notice the decrease in the loon population in the late 1960s and early 1970s. The major problems affecting them over the years are acid rain, mercury and climate change.

Acid rain is precipitation with acidic components such as sulfuric or nitric acid that changes the pH level of the lake and can harm fish and wildlife by reducing their populations. At a lower pH, fish cannot survive and eggs cannot hatch, wiping out many fish populations.

Mercury was another problem during the 1970s that was accelerated by acid rain. Mercury contaminates the water and fish, which loons eat. It accumulates in their tissues, changing their behaviors.

The effects of acid rain, pollution, mercury contamination from industrial sources and lead poisoning in sediment embed those toxins in the tissue of the fish, and the loons’ diet puts them at risk.

Studies have shown that pollutants in the water are causing adult loons to leave their nests, and therefore not reproducing.

“The mercury in the lakes makes loon parents lethargic, and they abandon their chicks. This isn’t normal because loons typically are great parents and have a strong parental instinct, even to other species of birds,” Bianchini said.

Ontario loons serve as an indicator of lower trophic levels meaning the bottom of the food chain — and the water quality of the lakes. If fish are dying due to the pollutants, the effect shows in the loon population, raising concerns about water conditions.

“There are a bunch of different factors weighing into the loon population. Pollutants are the biggest issue, such as lead poisoning still in sediments, mercury and acid rain,” said waterbird biologist Dave Moore of the Canadian Wildlife Service in Ottawa.

“There isn’t too much data on the Ontario loons, but we do know climate change is a growing concern,” Moore said.

The increase in wildfires due to climate change can affect the pH level, and the increase in storms damages nests and separates chicks from their parents.

It goes back to 1981, when loons were having about 0.8 chicks per pair every year. By comparison, in 2018 it was 0.6. Scientists said there won’t be enough chicks replacing adults if the birth rate drops to 0.48 chicks a year.

Bianchini said, “Losing a top predator like a loon can cause many species at the bottom of the food chain to overpopulate, and loons indicate if the lakes aren’t in the best condition. Loons not reproducing and lowering in numbers reflects a bad situation, and the ecosystem would be altered forever.”

Studies have shown, the pH levels of the lakes have improved, but there is still a great amount of mercury in fish.

Another hypothesis in Moore’s study was botulism. The disease occurs in birds when they eat or drink water that contains botulism toxins.

“In the last two years of my studying, I have seen botulism increasing in the loon population, which is something new,” Moore said.

These birds have almost disappeared in the Great Lakes region, and conservation efforts have grown. In the northern United States, there is a loon reproduction site where such efforts are occurring. Scientists are continuing to collect water samples in Ontario while loon chicks are being protected.

In Ontario, conservation groups are working to raise public awareness and make the lakes more loon-friendly. New farming policies are in place to restore the loon population, and boating regulations have become stricter to protect nests from damage.

“People associate the loon with being outside and the northern experience. Everyone in Canada knows a loon and knows their eerie call when they hear it. It wouldn’t be the same without them,” Moore said.

And Bianchini said, “By better understanding the reasons behind declining chick numbers, it may be possible to slow or even reverse these negative trends. We must save these interesting birds.”

4 thoughts on “Concerns about the Great Lakes increase, while Ontario loons decrease”