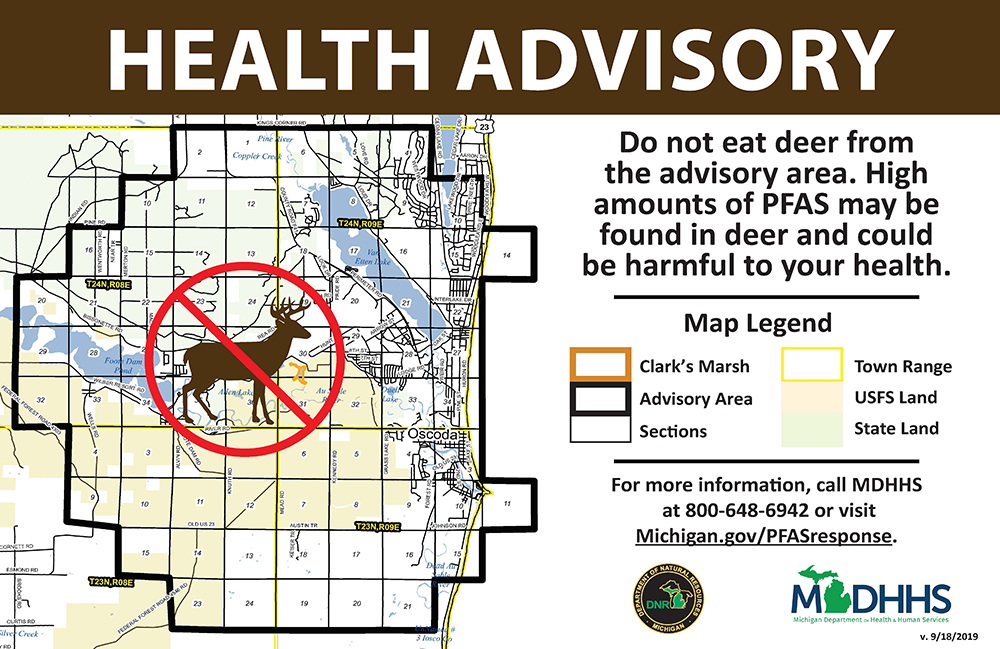 To keep healthy this fall, deer hunters have more to worry about than just COVID-19 and the flu.

On the beware list: a group of chemicals known as PFAS and lead from ammunition.

Michigan’s archery season for deer opened Oct. 1 and runs until Nov. 14 and then again for the month of December. The regular firearm season for deer runs Nov. 15-30 in the state.

A “Do Not Eat” advisory from the state Department of Natural Resources and Department of Health and Human Services is in effect for deer killed within 5 miles of Clark’s Marsh in Iosco County’s Oscoda Township. High levels of PFAS have been found in the groundwater there.

PFAS – perfluoroalkyl and polyfluoroalkyl substances – are chemicals used since the 1950s in industry and consumer products, including nonstick cookware and firefighting foam. The Centers for Disease Control and Prevention cautions that exposure to high levels of PFAS may damage the immune system, reduce antibody responses to vaccines and lower resistance to infectious diseases.

Testing found high levels of PFAS in deer in Clark’s Marsh near the former Wurtsmith Air Force Base, the departments said.

While that’s the only place in Michigan with a PFAS-related do-not-eat advisory, Wisconsin is warning hunters not to eat the liver of deer killed in the Marinette area, where PFAS contamination has been found in soil, sediment, surface and groundwater, surface water and drinking water wells.

Marinette is directly across the Menominee River from the Western Upper Peninsula city of Menominee, Michigan.

A 3-year-old site investigation by Johnson Controls Inc. /Tyco Fire Products has identified additional sites for investigation, according to the Wisconsin Department of Natural Resources, which says, “It is possible that more sites” in the Marinette and Peshtigo area “and responsible parties may be identified in the future, necessitating additional investigation.”

Meanwhile, the Minnesota Department of Natural Resources announced in late September that it will test muscle and liver samples from deer to see whether PFAS are present near two contaminated sites, one of them near the Duluth airport and the other near Minneapolis-St. Paul.

It will be the first time Minnesota has sampled deer for PFAS.

Nick Green, the public information officer for Michigan United Conservation Clubs, said one of the biggest issues with PFAS is that “we’re still in the very early stages of understanding how it interacts with humans.”

“We don’t know how it bioaccumulates in wildlife,” Green said. “We’re still understanding how it’s affecting our game and, in turn, affects the folks who are consuming that game.”

Health and Human Services recommends against eating the organs of any wild game and says that chemicals used in manufacturing and industry can get into the environment where wild game live. Some, such as dioxins, lead and mercury, last a long time and can build up in wild game.

Meanwhile, the Health and Human Services Department warns that lead fragments “are often found in venison shot with lead bullets. These pieces of lead are too small to be seen or felt while chewing. Ground venison has the most lead fragments.”

Most at risk, a department booklet says, are pregnant women, women who may get pregnant and children under 6. Lead can cause premature births, miscarriages and low birth-weight babies and, for young children, learning disabilities, lower IQs and stunted growth.

A newly released study by Illinois Wesleyan University researchers found lead in ground venison made from deer killed by shotguns.

The research team analyzed packets of venison from Illinois commercial meat-processing plants and found lead fragments in almost half the packets from “shotgun-harvested” deer, but no fragments in packets from “archery-harvested deer.” Each packet weighed almost 1 pound, and the fragments were small but not microscopic.

“No level of lead is currently considered safe for human consumption,” the study in the Bulletin of Environmental Contamination and Toxicology said. “Even small fragments from ammunition could have a deleterious effect.”

“With any lead there is a risk,” said study coauthor W. Aaron Wilson, an environmental studies professor.

Wilson said lead from many sources, including dust and drinking water, can accumulate in the body. Damage may take years to become noticeable.

“In toxicology, it’s like the straw breaking the camel’s back. As you add lead to your system, you might not see it (damage) for a long time,” Wilson said.

Removing additional exposure from lead ammunition from the diet, “not by removing venison but by changing my ammunition type, would reduce the chance that exposure happens,” he said.

While federal law prohibits the use of lead ammunition to hunt waterfowl, Michigan has no law prohibiting lead ammo when hunting other game, including deer.

“We want to help folks understand the risks to wildlife when they use toxic ammunition,” he said.