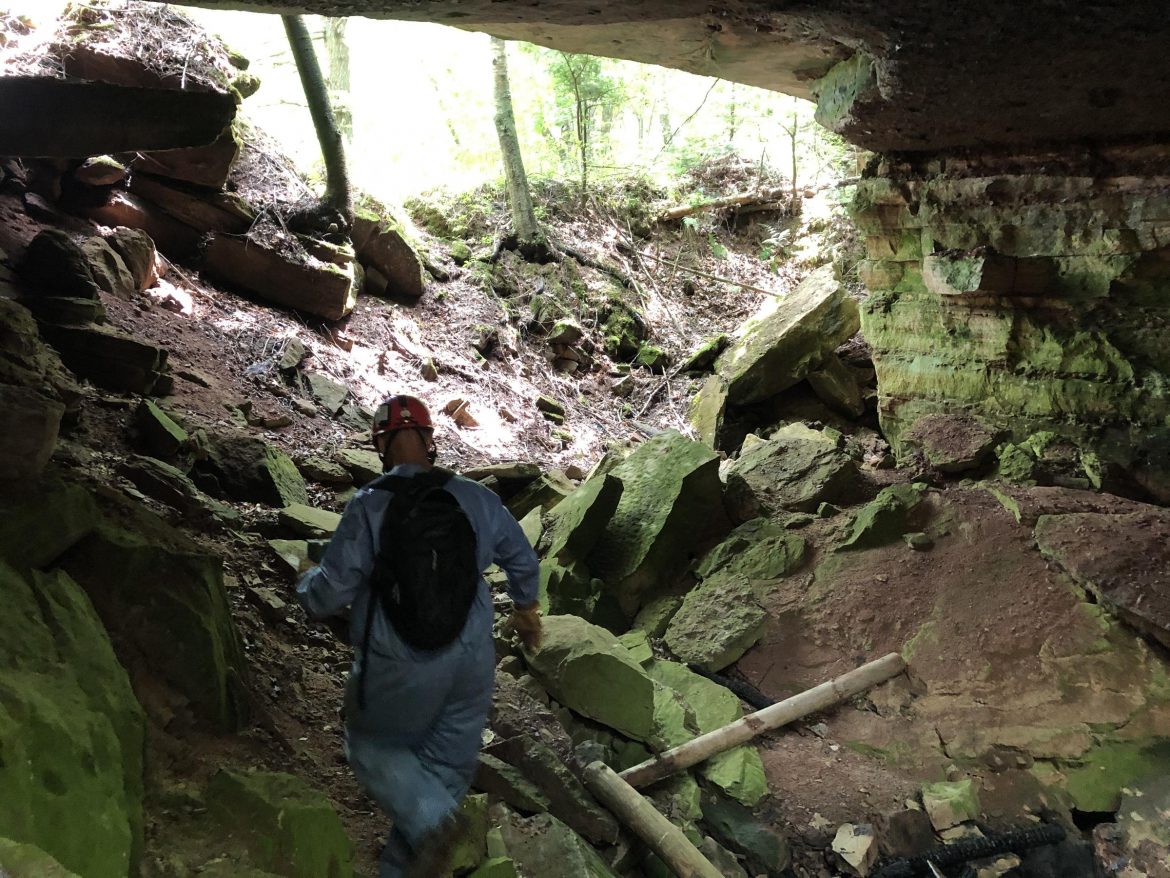 Steve Smith walking through the entrance of his mine in Norway, Michigan. Image: Cassidy Hough

Steve Smith has explored old caves ever since he was a kid — usually illegally.

Now he just does it legally.

“Listen to the water dripping, and bats, and you can smell the timbers and almost visualize what the miners were going through. I have a passion for this.” 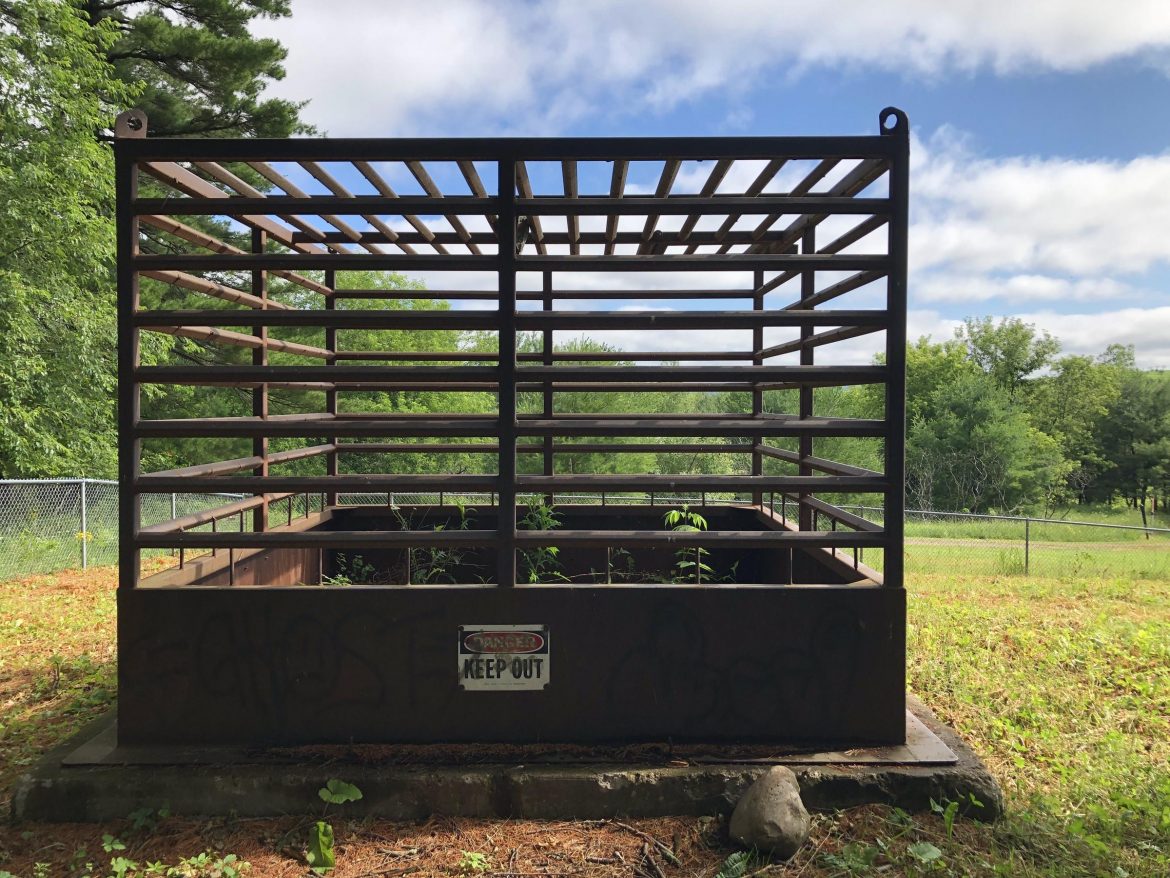 In 1992, when Steve was 37, he stood above the abandoned Millie Mine in Iron Mountain.

It was rumored to be “bottomless,” so he took that as a challenge.

Armed with 200 feet of rope and a couple of old flashlights strapped to motorcycle helmets, he and a friend made their descent.

They found the bottom about a hundred feet down, and were greeted by a hissing sound — bats.

It was a hibernation spot for up to 250,000 of them. He knows because he helped count them.

“There were all these bats flying, like just dozens of bats, hundreds of bats would be flying by the time we were through.”

Later, he heard the city of Iron Mountain was planning to fill in the mine with the bats still inside.  So he called Bat Conservation International, an organization dedicated to protecting bats and their ecosystems. Together, they saved the mine and all the bats inside.

Soon afterwards, Michigan’s Department of Natural Resources offered Steve a job as a mine inspector. 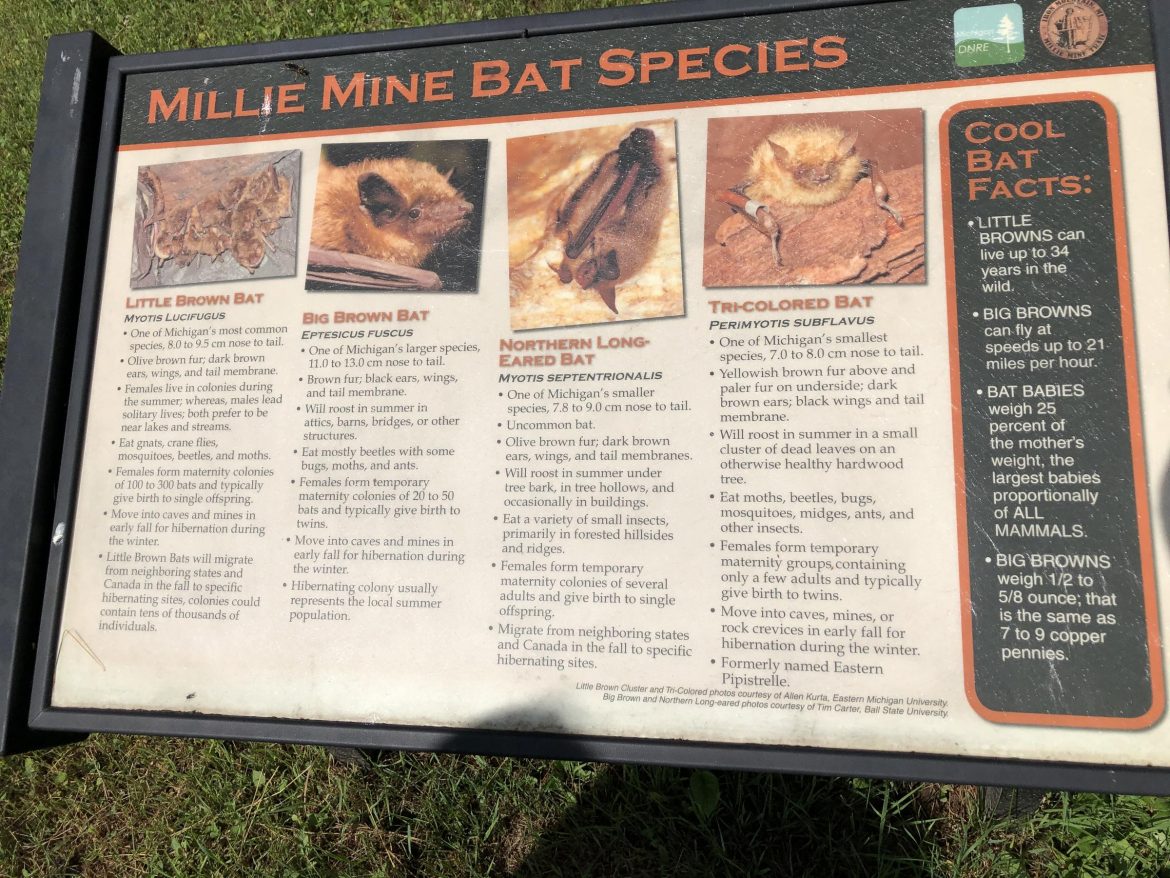 “What I had been doing since I was a little kid, illegally sneaking into mines, turned into a 26-year career.”

Steve worked closely with bat biologists throughout his career, so he grew fond of bats.  He even thought they were cute.

But then something happened that neither him nor biologists could protect bats from — white-nose syndrome.

White-nose arrived in New York from Europe in 2006.  It has since spread to 33 states and seven Canadian provinces.

Smith and his colleagues at the DNR were the first to discover white-nose in Michigan in 2014.

“That’s a lot of years of work putting into this, and then to have it all end because of a fungus, it’s just horrible,” Steve said. 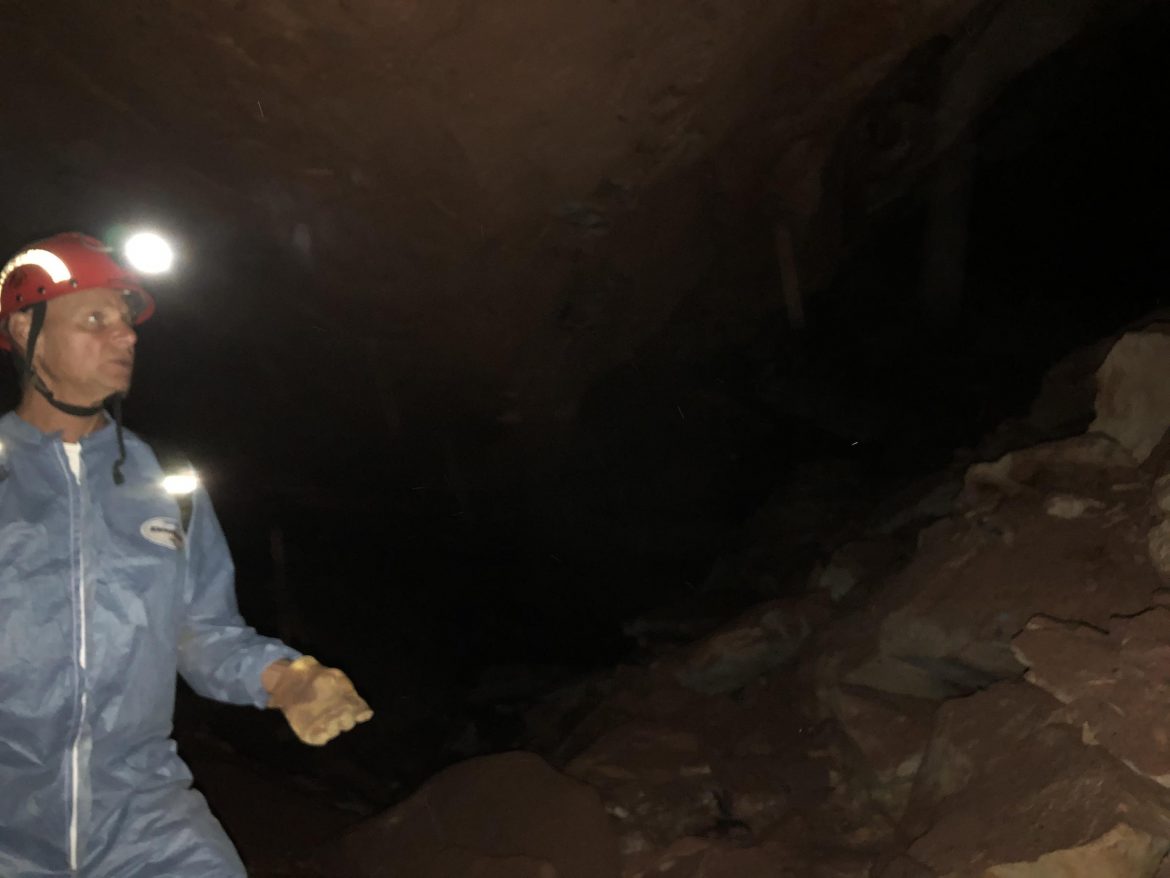 White-nose syndrome grows on bats while they hibernate in the winter, but it doesn’t actually kill them. Rather, the fungus irritates their skin, causing them to wake up in the middle of winter and burn up their fat reserves.  As a result, bats either starve or freeze to death when they leave the cave in search of food.

Smith now owns his own mine in Norway, Michigan.

Bats don’t live in caves during the summer, but he took me inside his mine to show me where thousands of bats used to live in the winter.

Much of the fungus’s spread can be attributed to people visiting caves without protection. The spores of the fungus stick to everything from your boots to your nose hair, so things like disposable suits and gloves are important when entering a cave, Steve said. 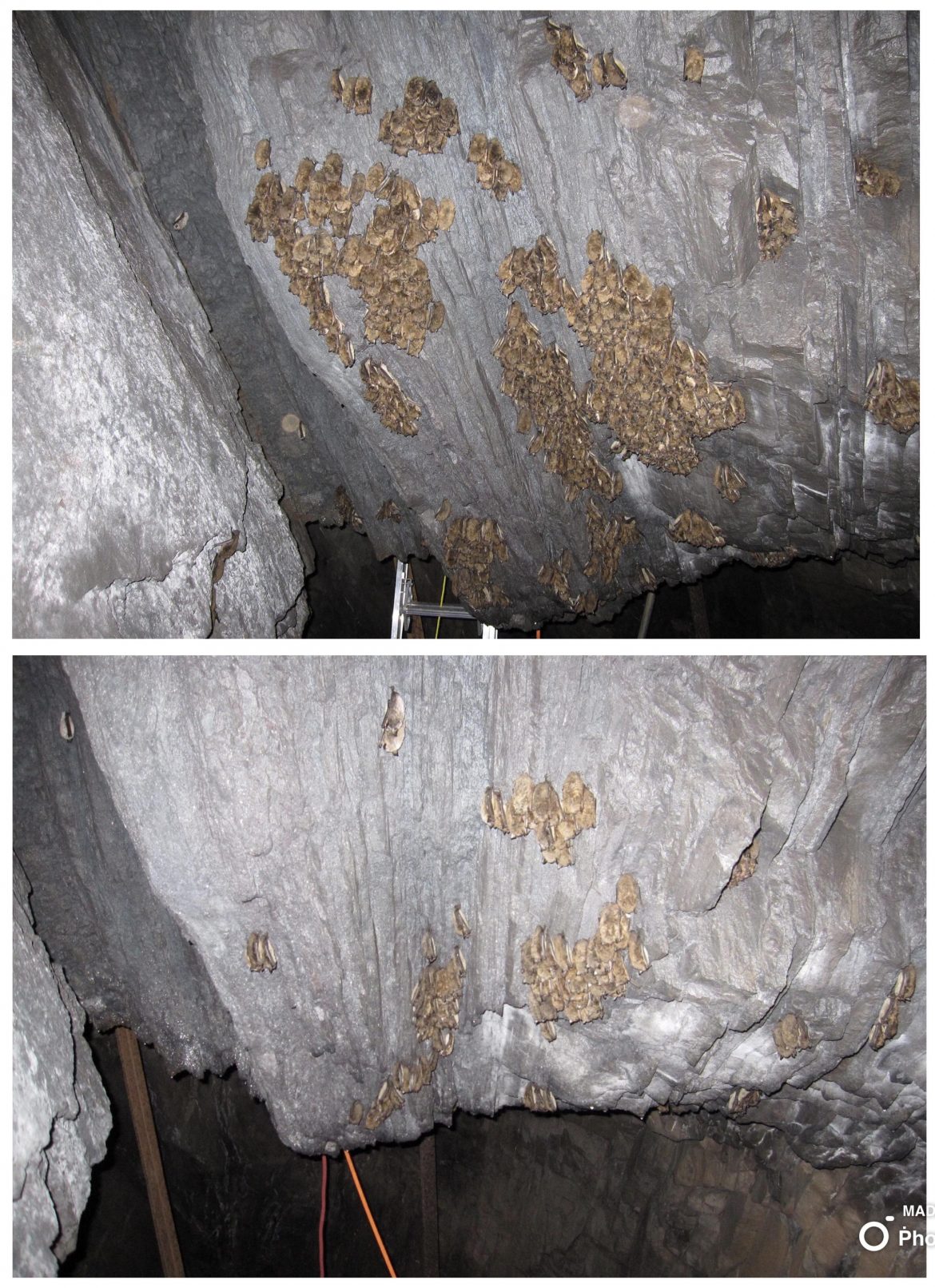 A mine in the Upper Peninsula before (top) and after (bottom) it was infected with white-nose syndrome. Image: Steve Smith

Especially since once the fungus reaches an area, there’s really no getting rid of it.

In Wisconsin, bat biologists tried stopping the spread by stripping down, showering and leaving the site with new clothes after entering an infected mine, but it was no use.

“It didn’t matter because when a bat leaves carrying white-nose and goes to another mine, it dumps the spores in the mine.  The bats themselves are carrying it,” Steve said.

In 2000, before Steve owned his mine, pictures of it were used in an advertising campaign to promote protection of bat habitats.

“This mine had clusters of like 2,500 to 5,000, clusters that were five feet long, and those are gone.  We’ll never see them again, because the bats are decimated by this white-nose.”

“We were in another mine, and when we got down into it there was like wind blowing pine needles all over, like piles of pine needles,” Steve said.  “It turns out they were bat bones, thousands of bat bones in piles.  There were so many dead bats that you couldn’t walk anywhere without seeing carcasses.”

There is no known cure for white-nose syndrome. 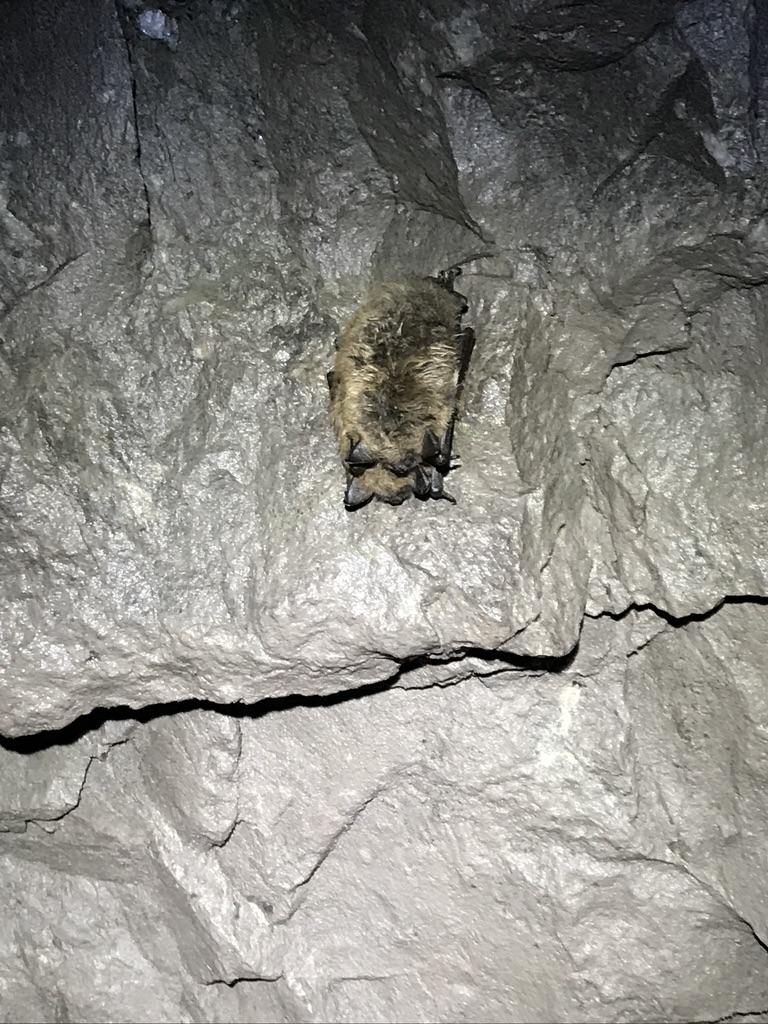 Experts have tried everything from an oral vaccine to installing air conditioning in mines to slow down the growth of the fungus.  They’ve even gassed mines to kill the fungus, but ended up killing everything else in the mine too.

But no matter what, bats always reintroduce the fungus when they return in the winter.

Even if by some miracle, a white-nose vaccine were given to all bats tomorrow, Steve says there’s no way to reverse the fact that 90% of them are gone.

And he says it may get worse for bats.

They’re expected to reach a 93-95% mortality rate before the population stabilizes.  And some species will likely be killed off entirely.

“The northern long-eared bat, it’s rare that we even find one, so they’re on the verge of extinction right now,” Steve said.  “And then the tri-colored bat, they’re almost gone too.”

But a new study by Giorgia Auteri, from the University of Michigan, shows a glimmer of hope for one species.

She found that the little brown bat has begun to show a genetic immunity to white-nose.

This means little brown bats should eventually repopulate.  But with most bats only having one or two babies per year, Steve isn’t optimistic. 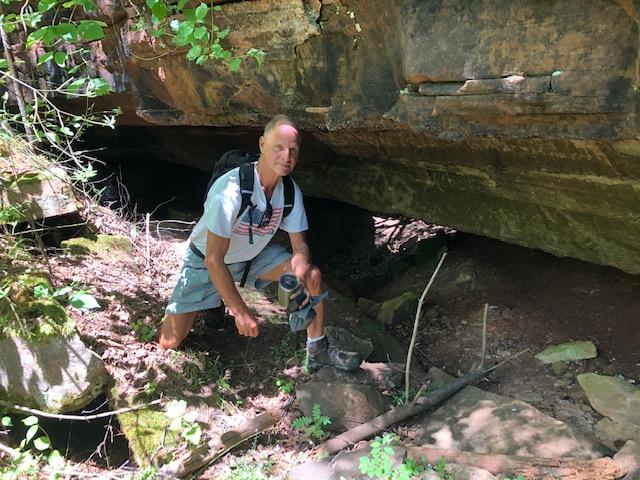 Steve Smith outside his mine in Norway, Michigan. Image: Cassidy Hough

“It’s going to be a long-term thing, this isn’t going to happen like next year or next decade,” Steve said.  “I think we’re looking at a long term thing, like centuries.”

In the meantime, Steve says Michiganders should prepare for life without bats, because their loss will have a negative impact on both the environment and us.

“They’re extremely beneficial.  They consume insects, especially pest insects including mosquitoes, gypsy moths, forest tent caterpillars and corn borers,” he said.  “And all that stuff isn’t necessarily up here, but the more bats eat these insects, the less insecticides we have to use.”

According to a study done in 2011, bats contributed about $22.9 billion to the agricultural industry annually before white-nose syndrome.  The total economic loss since white-nose has not yet been calculated.

Bats also eat disease-spreading insects and some even pollinate.

“I just don’t see where you can eradicate one entire population and not have drastic effects across the board, to all the animals,” he said.

Steve plans to retire this year and spend some time travelling around the country exploring caves — for fun.  But he’ll never stop advocating for bats.

“The biggest thing is to not attack bats.  If they’re in your house, don’t kill them,” he said.  “If you kill a bat and it’s a mother and it’s pregnant, we’ve just lost another chance to repopulate.”