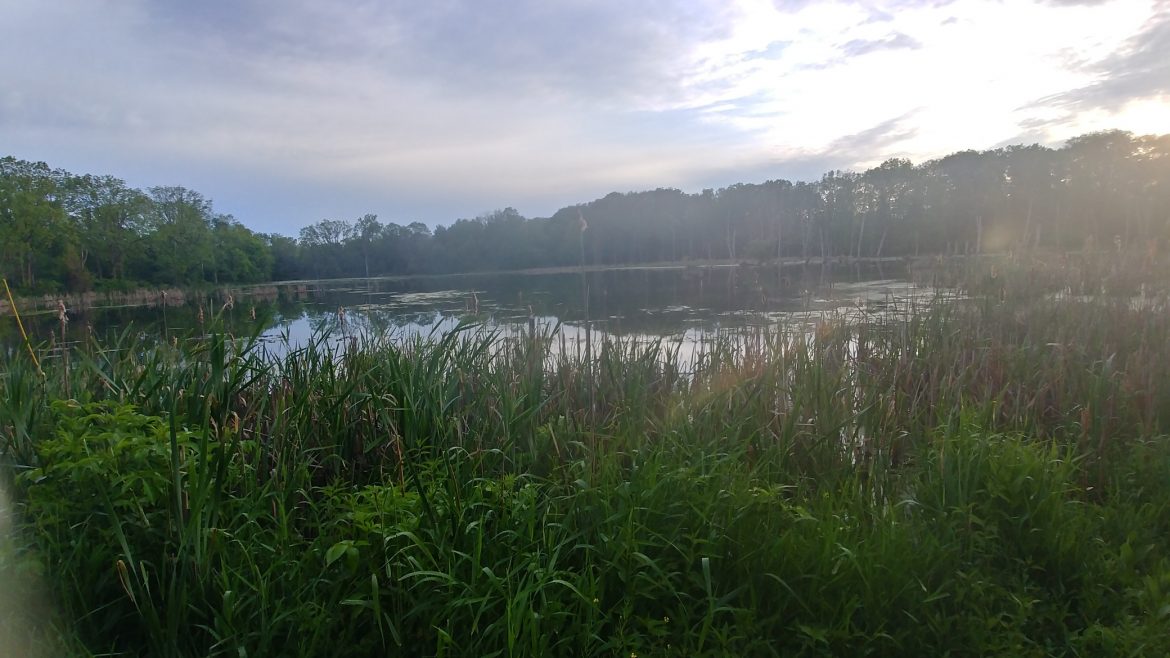 Dawn breaks over the wetlands along the Inter Urban Pathway. Image: Eric Freedman

I scratched an itch and found four goslings. I peeked at what had long piqued my curiosity and spotted a pair of spring-plumped robins. I followed my instincts and discovered a white-tailed deer just before she discovered me and fled.

All on my recent first journey along the Inter Urban Pathway.

As I pedaled past patches of wetlands, red-winged blackbirds flitted among the dried remains of last year’s cattails. Stan Tekiela writes in his “Birds of Michigan Field Guide”: “It is a sure sign of spring when the red-winged blackbird returns to the marsh. Nests are usually over shallow water in thick stands of cattails.”

And so they had.

They called to mind lyrics from one of my favorite tunes by Canadian folk singer-songwriter David Francey: 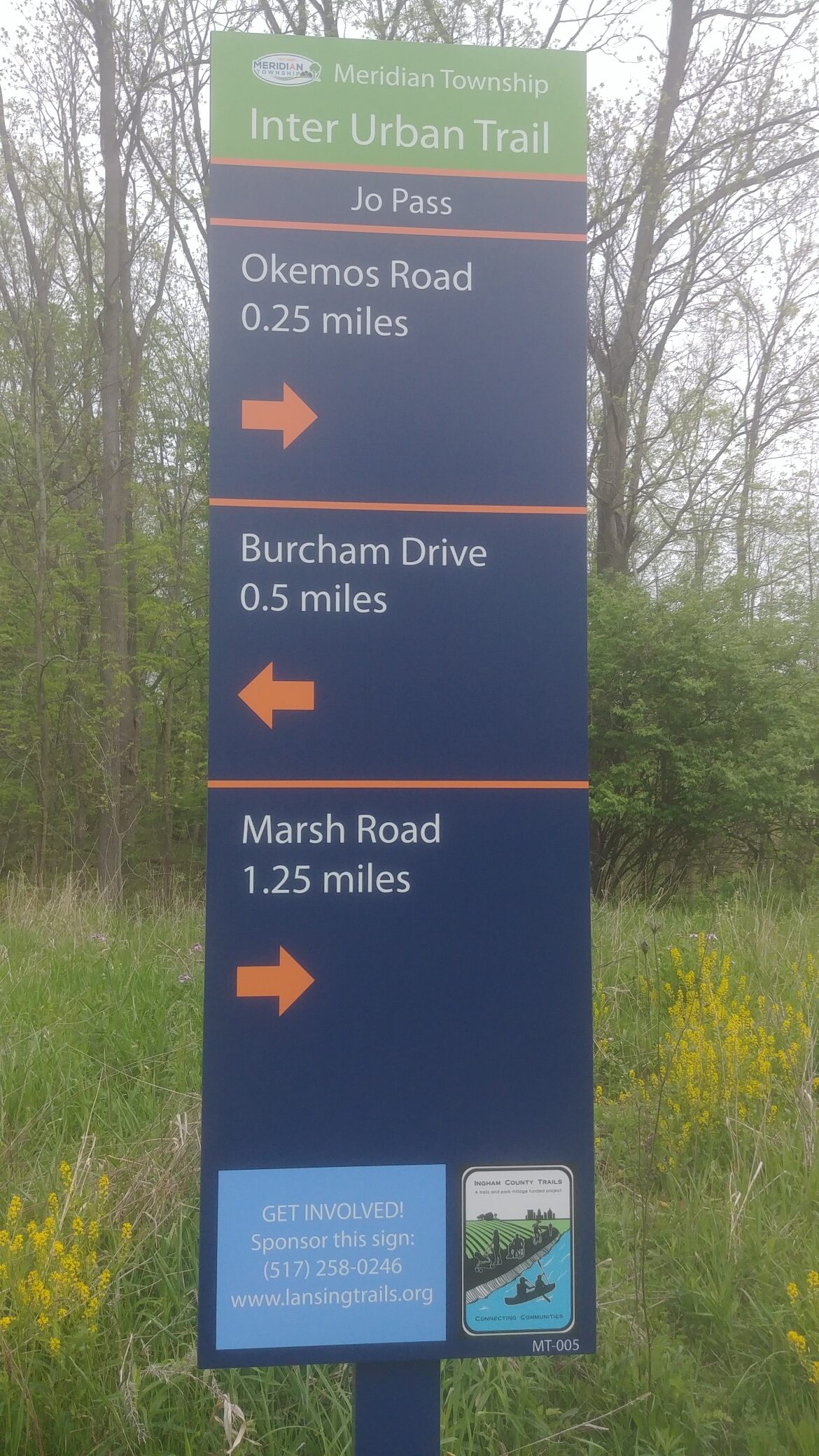 Also spotted during my first few forays: Two swans and a dozen Canada geese swimming, apparently unperturbed by those of us bicycling, jogging, dog-walking, scootering and just-plain walking the Inter Urban. A mallard stood in mid-pavement until I neared. A trio of rabbits scattered into the brush as I passed.

Sure, the Inter Urban isn’t majestic or grand. You won’t find it on lists of the best non-motorized pathways in the United States. It lacks the renown and history of the C&O Canal Trail running for more than 180 miles in Maryland and Washington, D.C. It’s not a tourist draw or a B&B magnet or a mecca for birders building their life lists.

Among Michigan’s rails-to-trails projects, it’s a blip on the landscape compared to the 34½-mile Kal-Haven Trail in Van Buren and Kalamazoo counties.

The Inter Urban in Meridian Township, Michigan, is only 1¾ miles long. One segment opened in 2009 and the other in 2011. And yes, it took me a decade to explore what was so close to home.

It runs along a stretch of the Michigan United Railway Co.’s former 33-mile route between downtown Lansing to the west and Owosso to the east, past the popular summer recreation spot that’s now Lake Lansing –once called Pine Lake. Local history and rail fan websites and the ubiquitous Wikipedia explain that red ink led the company to discontinue service, and the tracks eventually were paved over or removed.

I don’t want to oversell the Inter Urban.

Admittedly, the westernmost piece isn’t scenic. That’s along the back side of the East Lansing-Meridian Township water treatment plant with its huge sludge pond. You can hear the occasional horn of a passing freight train. Houses are visible along some sections of the pathway. And those geese leave yucky reminders of their presence on the pavement, forcing walkers, joggers and cyclist to navigate around them.

Modest though it be, the Inter Urban plays a role in a grander plans to link up with the nearby Michigan State University campus and the long-established Lansing River Trail a couple of blocks from Michigan’s 1879 Capitol. It could all be part of a route connecting Lansing’s historic Turner-Dodge House with Lake Lansing Park.

At the start of this essay, I mentioned an itch, curiosity and instincts. They come from the many, many times I’ve driven past one or another of the Inter Urban’s access points. The western entrance is closest to my front door, just 0.8 of a mile by odometer, 4 minutes by watch – or just one stop sign, one traffic circle, two rights and two lefts.

I may not have recognized it over the years, but each pathway access sign or cyclist or walker I saw entering the Inter Urban may have contributed to that subconscious itch, whetted that unrealized curiosity and stirred those unstirred instincts.

This is true in much of our life: Time after time our eyes glimpse something of potential interest, but our minds fail to register it until later, if ever. This is even truer when that something is in a familiar local setting where we move around on autopilot.

The trigger, my resolve to bike the Inter Urban, was a recent walk past that entrance. A few days later, around 7 a.m., I hopped onto my bike and headed off.

I used to do a lot of cycling, sometimes 2,000 miles in a year, but that number tumbled and tumbled and tumbled even further due to work commitments, summer travels, international programs and visits to children and grandchildren scattered in three other states. In fact, last year I didn’t even bring my bike up from the basement.

I had better intentions this year, even before deciding to explore the Inter Urban.

I carried my Trek into the garage, wiped off the dust and replaced the dead battery on its bike computer. My motivation was the coronavirus-induced long-term stay of two out-of-state grandchildren and the need to keep them occupied.

It may seem dense of me, but it wasn’t until my fifth time on the Inter Urban that I registered the pathway’s other connection with the COVID-19 pandemic – the importance of locality.

Maybe it took so long to recognize why locality matters because David Francey’s words distractingly kept playing in my head.

Safe as Moses in the rushes,
Builds his home on the river wide,
Every time I hear him singing,
Makes me feel like spring inside….

He’ll be in there singing his heart out,
He’ll be telling me stories too,
Of where he went to winter last year,
Of how he’s going back there too.

Official and self-imposed restrictions on travel and access to public places like beaches, parks, rivers and the woods had been keeping me close to home since late March. That’s undoubtedly true for many of my fellow Inter Urban users.

Under such circumstances, we pay more attention to escapes and opportunities close to home and rely more on our immediate environs to connect with the world outdoors. My friend, the nature essayist Tom Springer of Three Rivers, Michigan, says that cycling the trail more frequently may provide an intimacy I couldn’t have encountered by riding the famous C&O Canal Trail just once while on vacation.

As for local, I can look out my window and see deer that have jumped the chain link fence into the backyard to chow down on my hosta and rose of Sharon, leaving pellets behind on the lawn as a reminder of their intrusion. Chipmunks scamper across my back deck. Agile squirrels raid my “squirrel-proof” bird feeder, finding black sunflower seeds as appetizing as do the cardinals, blue jays and American goldfinches it attracts, while voles scavenge below the feeder for dropped seeds. Rabbits squeeze under the wooden gates. Birds nest in my two handmade birdhouses painted by a grandson.

Although woodchucks – fortunately – abandoned our backyard and migrated after we tore down the playhouse they’d burrowed under, I watched one recently in my next-door neighbor’s yard. My visiting granddaughter delights in the myriad black and gray squirrels that navigate the telephone wires. I delight in the sounds of woodpeckers loudly foraging in nearby trees

The opposite side of my block includes Burcham Park, a 24-acre landfill-turned-city park with a municipal solar array, a wooded micro-hill for walking, sledding and cross-country skiing, wild blackberries and the site of the fort my son and friends built from broken branches and scraps of wood. It’s good for Frisbee-tossing, kite-flying and dog-walking.

And it’s only a 2-minute pedal down the road from the Inter Urban, the goslings and the red-wing blackbirds.

One thought on “Along the Inter Urban”