A bike ride along the Grand River downtown is a breeze—heading downstream it’s all downhill.

Hotels, restaurants and buildings line the bank and cranes building new hotels and improving highways regularly swing out over the river, the longest in Michigan at about 250 miles.

Grand Rapids is home to one of the nation’s fastest growing economies and populations and, during this change, its leaders have vowed environmental progress. Its mayor has kept the city committed to the Paris Agreement and has encouraged sustainability efforts such as using 100 percent renewable energy by 2025 and ensuring equal and easy access to green space for Grand Rapids residents.

But this balancing of going green with getting big remains a huge challenge for West Michigan’s booming metropolis— and the famed river that bisects the city epitomizes this ongoing struggle.

As you head south on the trail that follows the river, the path flattens. Skyscrapers give way to trees, and bustling Interstate 196, which hugs the river in town, crosses the river and moves east. Traffic and construction, which dominate the scene downtown, are audible but distant.

Though it might seem like just a cyclist’s luxury, the terrain—downhill through town, then flat for 40 miles to Lake Michigan—signifies something important. The decline through town made for a mile-long rapids before dams raised the water level and drowned them. Now a group aims to remove the dams and rebuild the rapids. The 40 miles from Grand Rapids to the lake make for a largely navigable river that some hope to open up even more. These projects—rapids restoration and dredging—could change the face of the river and are sparking debate and igniting fights over its future.

Both would open access to the river and organizers for both promise a financial boon. Depending on who you talk to, that’s reason for excitement or outrage.

The projects are forcing people to ask, what’s a city to do with the river it grew up around? 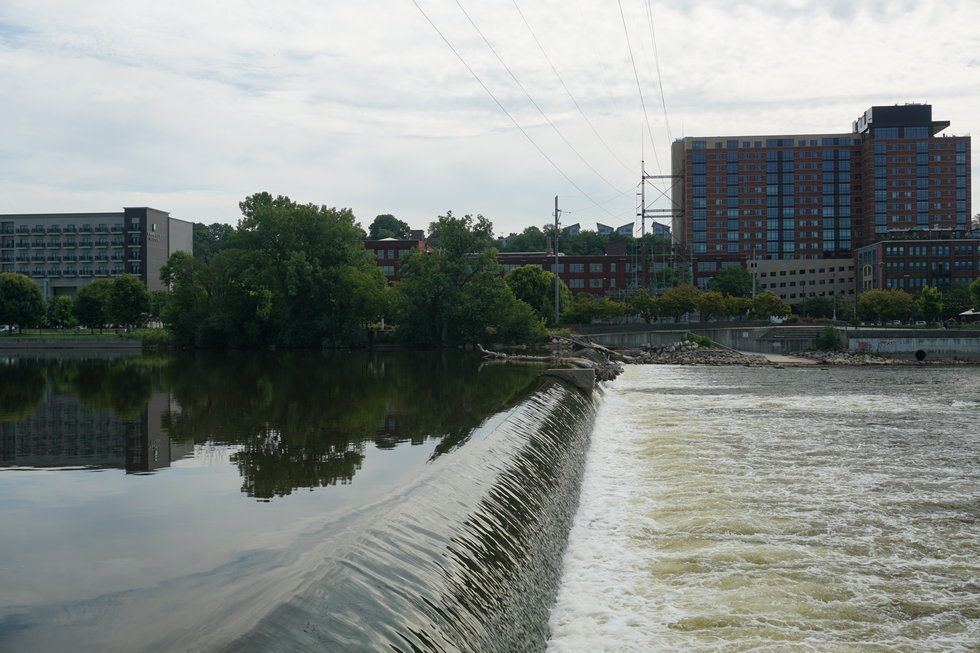 From the late 1800s to the 1920s, Grand Rapidians were dam builders. Through downtown, where the river drops 18 feet in two miles, five dams were built to hold enough water to float logs, power factories and keep it from drying up seasonally.

As water rose behind dams, rapids drowned. Seasonal flooding prompted floodwall construction. Now, for most of its path through the city, the Grand River slips between two walls at a level that hide the rapids beneath its surface.

Grand Rapids has been without rapids almost longer than it existed with them.

An effort to bring back the rapids, headed up by non-profit Grand Rapids Whitewater, isn’t born of nostalgia for a free river—at least not entirely. The plan’s proponents say restoring the rapids will bring people and money to the area while improving life for Grand Rapids residents and improving habitat for native and sport fish.

The project, which has raised $33 million and plans to begin removing the first of five dams in 2020, began with a focus on removing dams to create downtown whitewater recreation opportunities like rafting, kayaking and stand-up paddle boarding, Matt Chapman, project manager for Grand Rapids Whitewater, told EHN.

According to a 2014 economic impact study the group commissioned, a whitewater course in downtown Grand Rapids could attract 8,500 to 10,000 users each year.

As the project developed, its focus has expanded and changed. Now the whitewater recreation park has a reduced place in the river, said Chapman. Concerns about fish passage and habitat in a river dominated by whitewater highlights the risks that comes with altering nature, even in the name of restoration, and prompted the organization to tweak their still-developing plans.

The project now includes riverbank improvements under the direction of the city’s River for All plan: new parks, gathering spaces and event venues designed to connect people with the river. Biking and walking trails along the river will connect major regional trails on either side of Grand Rapids. It will open access to the river for everyone, the plan says. 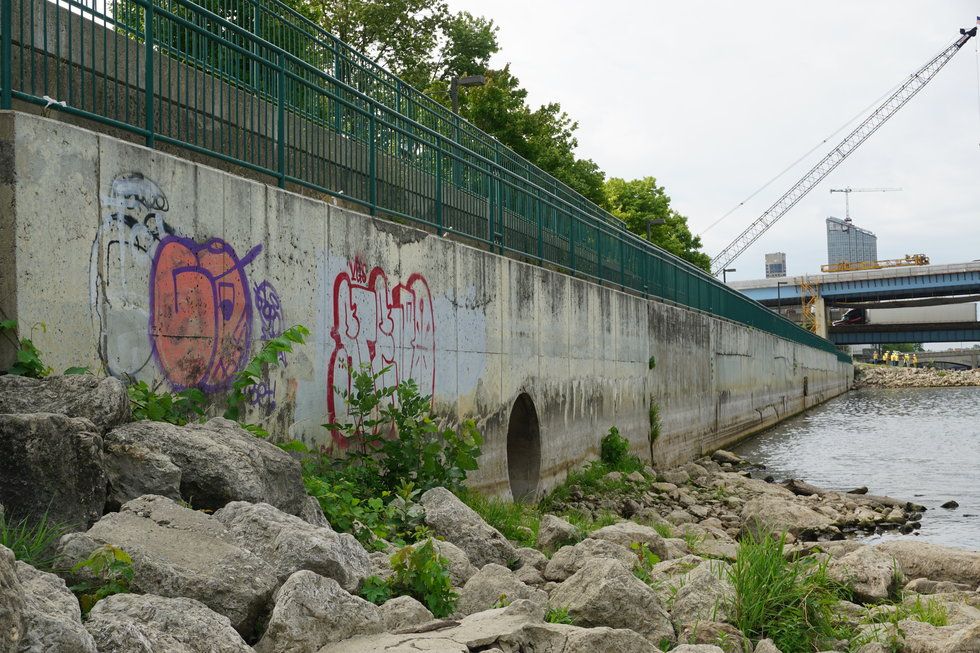 Proponents of the plan say it’s not just an economic win, but great for the river’s ecology and the city’s social health.

It has “the potential to reconnect the communities of people—our neighborhoods—back to the river, both physically and psychologically. We’ve been disconnected from that river as a people and as a culture for many decades now,” Guy said.

Flood walls are a perfect example of that, he said.

“We’ve got a lot of places along the river front that have very steep concrete walls that essentially wall the community off from the waterfront, and we have very limited opportunities to access the water in a safe way,” he said.

Guy envisions the river—both its water and its edges—filled with places for people to connect. The river naturally divides the town, east and west, but maybe not for long.

However, downtown development hasn’t always been a unifier, others warn.

The river restoration project is part of a decade-long reinvigoration of downtown Grand Rapids that has harmed certain parts of the community, Ryan VerWys, president and CEO of Inner City Christian Federation, which works for affordable housing in Grand Rapids, told EHN.

Like in many American cities, as downtown Grand Rapids became desirable, the price of nearby homes and rent skyrocketed. People with lower incomes, unable to afford rising prices, moved in with family or away from downtown, when possible.

Since early this decade, average home prices have more than doubled in much of the area immediately surrounding downtown, according to the popular housing search website Zillow. In 2019, rent prices had increased by as much as 8 percent from the year before and almost 50 percent since 2011.

Grand Rapids has seen a spike in homeless families recently, VerWys said. This January, the waitlist for 35 family units at the city’s homeless shelters was more than 100 families long, not counting those who didn’t call the shelter.

“Anytime, a community like Grand Rapids aspires to do something beautiful and invest in areas that have been disinvested, we have to keep in mind those whose voice might not be at the table,” he said.

He’s hopeful that with concerted effort, Grand Rapids can reinvest in an inclusive way.

“We shouldn’t allow that to cause us not to dream big dreams, but our dreaming should be inclusive of those who we might not think to include at the outset,” he said.

Letting the river guide the restoration 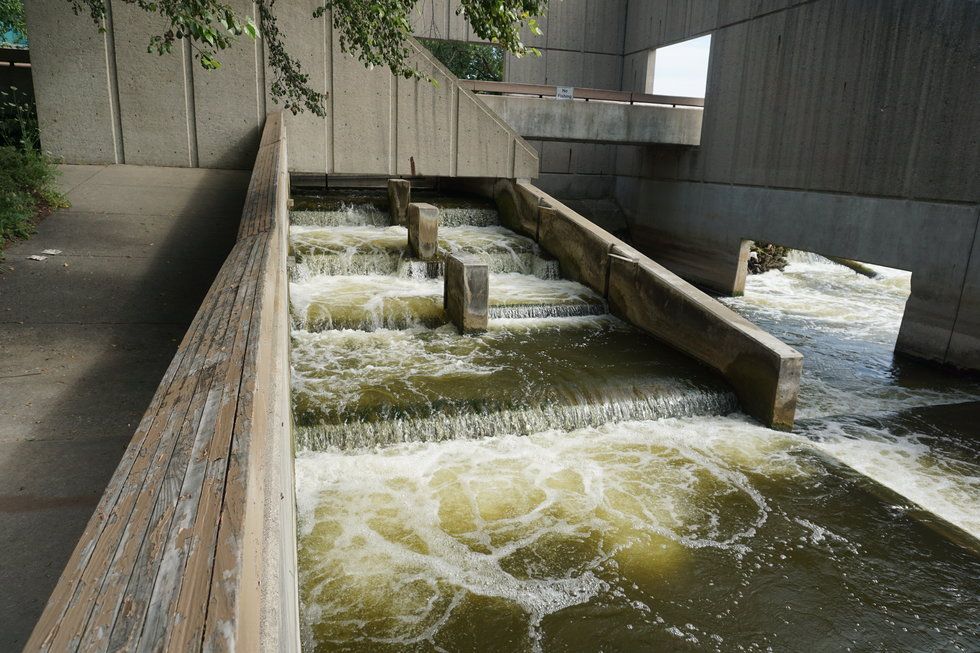 More people connected to the Grand River and benefiting from it could be good for the river’s health, too, though the ecological benefits of dam removal aren’t guaranteed.

“I love people interacting and using their waterfront for their prosperity. The more people who are, the more community benefits from this waterfront. Generally, that means the more stewardship they’re going to have in the long term,” Bryan Burroughs, the executive director of Michigan Trout Unlimited, told EHN.

Proponents are hopeful that removing dams will provide access to more spawning ground for fish that can’t navigate the fish ladder, which currently provides the only way around the dam. Catfish, suckers and a lot of minnow species can’t get past the dam now, but might when it’s removed.

It’s not a guarantee because the river will be engineered to create rapids, and there are rapids that fish can’t navigate.

Fish need flows they can handle, places to rest or cracks and crevices to sneak under rapids instead of going over them. Many fish can also sense where the greater flow of water is—an adaptation that keeps them from swimming up dead-end tributaries. Funneling a lot of water into impassable rapids and making the fish ladder obsolete could be worse for fish, especially salmon and steelhead that easily navigate the fish ladder now.

And complicating things: designers want to increase passage upstream for all fish but one, the invasive sea lamprey.

Sea lamprey attach their round, teeth-ringed nightmare mouths to otherwise healthy fish and slowly suck out bodily fluids. The problem for the Grand Rapids project is that they migrate up the Grand River at the same time as other native and sport fish.

“Needing to keep one fish out during the spring [migration] has been one of the beautiful struggles in fisheries management,” Burroughs said. It’s difficult to let past every fish but one.

Sea lamprey getting past Grand Rapids would be a major disruption, Jay Wesley, Lake Michigan basin coordinator for Michigan’s Department of Natural Resources, told EHN in an email.

He said sea lamprey would have 1,900 more miles of spawning habitat and could produce up to 200,000 more of the parasites. They could kill two million fish and cost the Lake Michigan fishery $40 million. Control efforts would cost another $2 million each year.

The most discussed solution to the problems of dam removal is another dam upstream that can be raised and lowered seasonally. This doesn’t get past the problem of concurrent migrations but will allow more fish to pass outside of sea lamprey migration.

For a project like this “the devil is in the details,” Burroughs said.

“I have a sense that they’re still, in some way, shape or form, struggling through those whitewater desires versus fish-passage desires,” he said. “I’m very hopeful they will get it right.”

That struggle shows in how the plans have transformed over time.

“We have reduced the height and velocity of those waves,” Matt Chapman said. It’s an accommodation for migrating fish.

“When we first started talking about this idea of restoring the rapids in Grand Rapids, it was very heavily focused on recreation and whitewater recreation,” he said. “That still is a key driver to this but … we have really tried to study and listen and look at the river and let the river guide the restoration.”

One thought on “Competing visions for a famed river in a Midwest hotspot: Part 1”