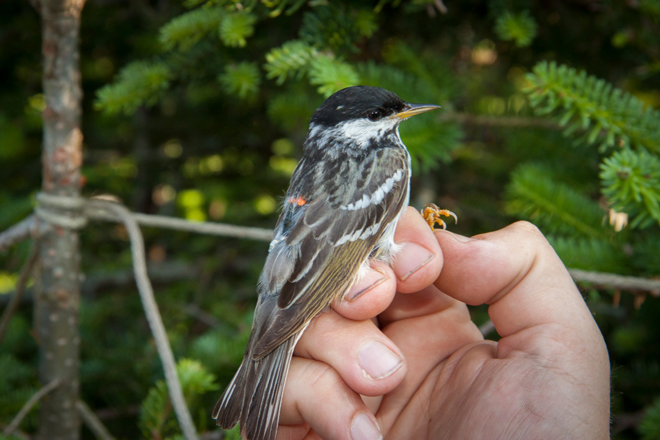 A male blackpoll warbler in breeding plumage with a geolocator on its back. Image: Vermont Center for Ecostudies

Blackpoll warblers are on a 12,400-mile trip to their breeding grounds in Canada and Alaska to the Amazon Basin and northern South America.

What sort of luggage did they take? Tiny backpacks with geolocators given to them by researchers hoping to understand their migration paths and the pitstops they make on the way to refuel.

They’ll soon be here in the Great Lakes Basin, a crucial stop, around mid-May, according to a recent study, “A boreal songbird’s 20,000 km migration across North America and the Atlantic Ocean,” published March 19 in Ecology.

Ohio, Indiana, Illinois, Michigan, and Ontario are the only substantial stopover points that blackpoll warblers make during their spring migration, according to William DeLuca, one of the researchers on this study and an assistant professor at the University of Massachusetts. The warbler stops here in early and mid-May to indulge in insects before making the final push to Alaska and northern Canada, DeLuca said.

If you want to see them while they rest up around here, check out Indiana Dunes National Park, Magee Marsh in Ohio, Shiawassee National Wildlife Refuge in Michigan and Thunder Cape Bird Observatory in Ontario.

Until recently the lives of blackpoll warblers have remained a mystery as they only spend two to three months of the year in North America, DeLuca said. This lack of knowledge made it difficult to conserve the bird, one of the fastest declining songbird species in North America.

“Once we understand where and what it is they’re doing then we can start to figure out where those populations are limited,” DeLuca said. “Then you can start to target your conservation efforts.”

DeLuca suspects them to be most limited in South America. The birds are threatened there because palm oil corporations destroy many ecosystems for their plantations, he said. Palm oil is found in many processed foods.

If you want to preserve birds, avoid palm oil, DeLuca said “It’s a direct connection between the choices we make as consumers and what’s happening with our biodiversity.”

Choosing which coffee to drink also impacts many migratory bird species, DeLuca said. In the 1960s during the Green Revolution many countries in South America began to use chemicals in agricultural management and reducing or removing shade trees from their coffee farms. The removal of shade trees makes the farm less suitable for bird habitat, according to Robert Rice director of the Bird-Friendly Coffee program at the Smithsonian Migratory Bird Center.

Research in Peru has demonstrated this. Coffee grown in the sun with very few or no shade trees provides habitat for about 60 bird species, Rice said. That may sound like a lot, but many birders flock to Peru in pursuit of seeing more than 1,800 species that spend at least some of their lives there, according to Field Guides.

Just a small amount of shade trees on coffee farms increases the number of bird species present to 170, Rice said. But it’s when you put in a great number of diverse trees that you start finding a lot of birds.

“When you put in a diverse system that would qualify as bird friendly you get upwards of 240 species of birds,” Rice said.

Encouraging coffee producers in South America to provide adequate shade and shade tree diversity for bird habitat on their farms is the goal of the Bird Friendly® coffee certification created by the Smithsonian Migratory Bird Center. Coffee grown under this certification not only protects bird habitat but also allows for the shade trees to sequester carbon and fight climate change, according to the center.

Regardless of other benefits, such as a certification increasing their profits by as much as 50 cents per pound, it is difficult to get larger coffee farms to manage for bird habitat, Rice said.

The trees on many larger farms are often only one to three species and uniform in height, Rice said. Even if these trees provide a lot of shade they do not provide good habitat for a diversity of birds and other wildlife.

Different species of trees will attract different types of insects and grow different fruit which birds feed on.

“Any given tree has its own little micro ecosystem,” Rice said.

Conserving bird habitat in South America doesn’t mean we can ignore the land here. One way homeowners can provide habitat for birds like the blackpoll warbler is by planting native plants, DeLuca said. Much of what these birds prefer to eat can be found on native plants, whether that be berries or insects.

“Insect diversity and abundance is highest on native plants,” DeLuca said. “Those native plants are also the ones providing food in the form of berries and fruit in the fall.”

People can also provide data to scientists by putting their observations on eBird. The project headed by the Cornell Lab of Ornithology is currently looking forward to the Global Big Day on May 4 when organizers hope to set a new record for the number of bird species reported in one day. Last year 7,025 species were reported by users of the site. This would overlap with when blackpoll warblers could be making their stopovers across the Great Lakes basin.

This May 4 sitting back with a cup of environmentally minded coffee and watching the birds flock around your birdfeeder could be both the most relaxing and scientifically significant thing you could do.

If you’re lucky you might just see a warbler returning from South America with some luggage.