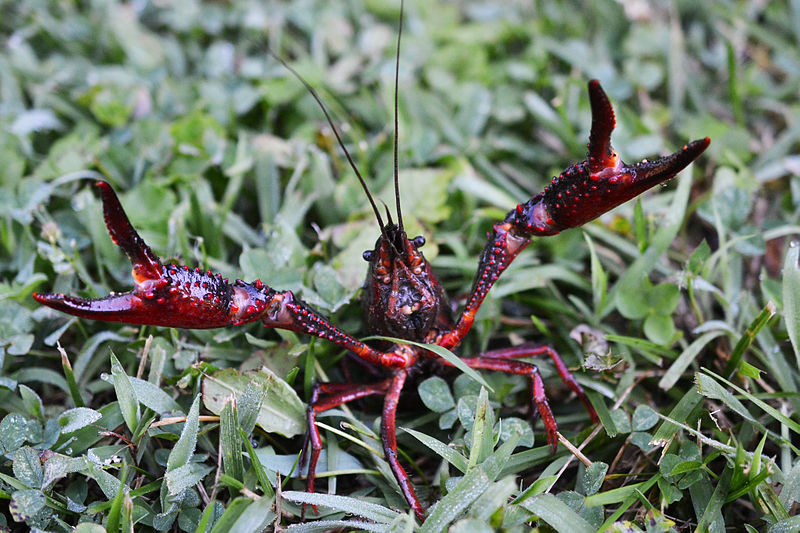 The red swamp crayfish can reproduce multiple times a year. Females can carry up to 900 eggs.

That means rapid population growth and possibly trouble for the Great Lakes.

The species is native to the Gulf Coast region of the United States and Mexico, but it has invaded Michigan inland waters and threatens the Great Lakes.

“This is a crayfish that when introduced outside of its native range has had big and well-documented negative effects on freshwater ecosystems,” said Eric Larson, an assistant professor in the Natural Resources and Environmental Sciences Department at the University of Illinois.

Once established, the crayfish will eat aquatic plants, amphibians, native fish and other crayfish.

Larson and other researchers are looking for ways to keep it from making it that far.

Their recent study in the Journal of Great Lakes Research predicts the most likely places the red swamp crayfish could next inhabit.

“We’ve been worried about the red swamp crayfish, which is kind of the most globally widespread and harmful of invasive crayfish,” Larson said.

The researchers identified Great Lakes habitat with water temperatures that are good for the crayfish to locate where they think they can live.

The water needs to hit summer temperatures of at least 59 degrees for the crayfish to be able to reproduce, Larson said.

Sheltered, shallow nearshore bays like Saginaw Bay and Green Bay and southern Lake Michigan and Lake Erie are likely locations, said Rachel Egly, a research associate at the Institute of Environmental Sustainability at Loyola University Chicago and a member of the research team.

The crayfish already inhabits inland waters in Michigan, and a population of the invasive species has already been found in Sandusky Bay in the western basin of Lake Erie, she said. It hasn’t spread from there.

But that doesn’t mean it couldn’t.

“This crayfish would spread fairly slowly in the Great Lakes at its own dispersal, and it probably can’t cross a lot of deeper, colder Great Lakes habitat that would be hostile to it,” Larson said. “It’s largely human introductions that we worry about.”

The crayfish is often found in classroom aquariums, and it is used for seafood boils as well as fishing bait, he said. It would likely spread in the lakes through human release of crayfish used for these purposes.

The red swamp crayfish has been found as far away as Germany and along the West Coast of the United States, as far north as Washington.

“It can live a lot of places,” Larson said. “It’s tolerant of a lot of conditions so it’s invaded lots of types of habitats. It has a high reproductive rate and it has tended to become very abundant in comparison to native crayfish.”

“Most ecosystems have crayfish in them, and when red swamp crayfish come in, they can compete with these existing native crayfish for food or shelter and displace them,” she said. “This can really change food webs and how other organisms interact with this new species.”

Larson said he hopes state agencies will use the study to better monitor for the invader.

Egly said it’s up to the resource management agencies to use the model as a tool.

Efforts to prevent the species from spreading could include education and outreach to the public to limit spreading of the species by people or making it illegal to transport live red swamp crayfish, something some states have already done.

Egly said she hopes that managers use the map to create new plans to monitor where the crayfish might establish before they actually do.

If the crayfish is found, control measures are likely to be site specific, but could include a combination of chemical control, the introduction of predators and trapping systems.

“I think crayfish are very difficult to remove after they’ve established a population,” he said. “You don’t have to miss a lot of individuals in a lake or a pond for that population to bounce back. It’s not impossible, but it can be costly and time consuming, and where we can, we’d really like to prevent invasions from happening.”