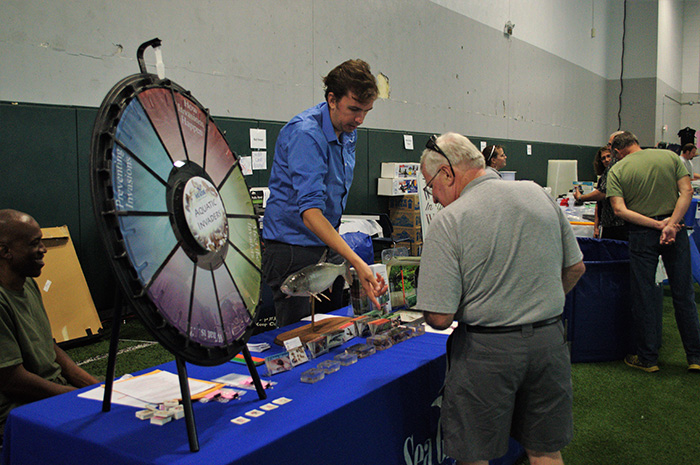 Most Great Lakes boaters have heard that zebra mussels, round gobies, milfoil and other invasive species harm the environment.

But that doesn’t convince everyone to do something about it, according to a new study by Loyola University in Chicago titled “Risk of invasive species spread by recreational boaters remains high despite widespread adoption of conservation behaviors.”

Despite organizations like the Illinois Department of Natural Resources pushing boaters to properly clean their boats, the effects of these aquatic invasives are still felt, the study reports.

So what might work better than flooding boaters with all kinds of messages that invasive species are bad?

“If I had the money, I would be spending the money on inspection stations,” said Reuben Keller, a professor at Loyola’s Institute of Environmental Sustainability and the study’s co-author. “Unlike the outreach message, in which people get to decide if they want to engage with the message, you gain access to everyone who has a boat.”

The study, published in the Journal of Environmental Management, is the first to ask how what boaters are told about conservation influences what they do.

It shows that the vast number of boats moving across the region’s numerous waterways makes fighting aquatic invasives complex. The invasives are easily overlooked by boaters, making transportation common.

And it only takes one person to create a problem.

“Economists talk about this as a weakest link problem,” Keller said. “The person who is doing the worst negates the behaviors of the good actors. So, while there remains some boaters who do not adopt conservation behaviors, these species will continue to be spread.”

When these invasive species get into the lakes, they often cause a decline in sports fish, Keller said. Invasive plants grow so thick that people can’t drive a boat or cast a line through them.

“So what do we do?” asked Kevin Irons, the Aquaculture and Aquatic Nuisance Species Program Manager for the Illinois Department of Natural Resources. “How do we enforce the adoption of conservation behaviors better?”

Keller’s inspection stations is one solution. Idaho and some Great Lakes states have had success with them.

Another solution is more positive outreach messages and consistent regulations across the Great Lakes region. It’s an international issue.

Until recently, Ontario did not have much regulation in place for anglers and boaters and seemed to focus on outreach alone, according to study done jointly by Cornell University in New York and the Great Lakes Fishery Commission in Michigan. In 2018, regulations were made similar internationally to increase the effectiveness of species management.

The transport zero campaign, developed in Illinois, emphasizes three ways to limit invasive species spread. It has resonated well with boaters in other Great Lakes states, Irons said.  The campaign, “Be a Hero, Transport Zero,” makes boaters feel good for caring about the environment by removing plants, animals and mud from all equipment, draining all water from the boat and gear and drying everything thoroughly with a towel.

However it remains a hard habit to establish for a lot of boaters, according to aquatic species experts. That is why regulations are also crucial.

Illinois has created an invasive species unit to regulate Great Lakes waters over the past eight years. It is comprised of conservation officers who regulate such issues as live critters in a food market and surveilling boats. It is successful, because officers can interact with boaters, Irons said.

Everyone has a stake in this issue, said Kevin Walters, an aquatic biologist with the Michigan Department of Environmental Quality. That is because much of Michigan’s economy is based on water-related recreation, commerce and real estate.

Michigan doesn’t attack invaders so much species by species but by looking at how they enter and travel. The state targets two pathways: recreation and trade.

It is not 100 percent effective, Walters said. “Even if you have 100 people and 99 percent do a really good job cleaning their boat, and one person doesn’t, then it goes out the window.”

But it is better for a species to be introduced once by one boater because it is much easier to eradicate, he said.

“Among the people we are reaching out to, our message has been very positively received. There are 1.1 million registered boaters in Michigan, and we reach close to 10,000 people per year,” Walters said.

What more can be done?

Instead of spending on costly outreach programs with as yet unknown effectiveness, research should determine the best way to convert careless boaters, Keller said.

When someone violates an aquatic invasive species law in Illinois, a new compact shares that information with other Great Lakes states. A boater who fails to take precautions when cleaning their boat in Illinois, may also become a violator elsewhere.

This sharing of information could prohibit boaters who do not care about the spread of aquatic invasives from doing business in other places.

The Great Lakes and St. Lawrence Governors and Premiers Association has created a list of the “least wanted” aquatic invasives that the group agrees should be regulated in all states and provinces and developed a mutual aid agreement.

Despite the challenges, Irons and other aquatic invasives specialists say the trend is going in the right direction.

“Since 2010, I have seen significant change and tightening up of our regulations not only in Illinois but all across the basin where we are much more on the same page,” Irons said. “There are already 180 species in the Great Lakes Basin that we are concerned with, but I think we are very vigilant to make sure there are no more.”