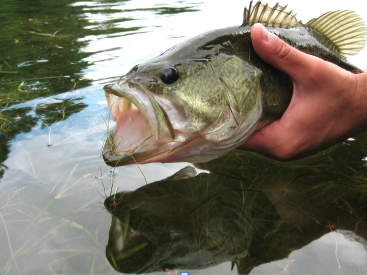 A disease that kills one of Michigan’s most popular gamefish appears to be spreading northward, worrying anglers and fisheries managers.

“[The virus] jumped multiple counties, and the only way it was gonna get there is if somebody moved infected fish,” said Gary Whelan, the Michigan Department of Natural Resources (DNR) Fisheries Division research manager.

“It’s something we’re going to need to deal with in the near future.”

Some anglers worry that the disease, which first appeared in Michigan in the early 2000s in Clare County, is coming north.

“We haven’t yet heard anything about this virus here in Sault Ste. Marie, but it’s concerning,” said Troy Isaac, owner of Maverick Fish Hunting. “I run a fishing show that doesn’t use a whole lot of bass, but for the larger fish eating it, it can be a problem.”

The earlier outbreak killed 20 percent of the bass exposed to it, Whelan said. “It’s been found in, really, all kinds of fish from the sunfish family.”

The agency describes the largemouth bass virus as an infection sometimes found in healthy fish. It can kill fish by afflicting their swim bladder, hindering their ability to swim.

Dead and dying fish are often closer to the water’s surface. Some visual symptoms include fins that appear red and the appearance of an enlarged and yellow swim bladder when the fish is cut open.

The virus likely compromised the immune system of bass in Beaver Lake, causing secondary bacterial infections to become more lethal, Whelan said.  Fish spread the virus by shedding it either directly through the skin or through waste, which can immediately infect fish around it or that consume it.

Whelan said that the virus was found during an investigation of lakes in Alpena and Montmorency counties and appears to be moving north.

The virus is not known to affect people if the fish is cooked properly, so they’re safe to eat, said Martha VanAmberg, a hatchery manager at the DNR.

“Fishermen and anglers shouldn’t be worried, just aware,” she said. “As always, we urge them to clean their equipment to prevent the spread.”

To keep from spreading the virus, the DNR advises anglers to clean fishing equipment between trips, keep fish parts from contacting different bodies of water, not hold largemouth bass in captivity for a long time before reintroducing them to their native water and to report sightings of 25 or more dead largemouth bass to the agency.

“Drain your live well, and don’t move any fish from one body of water to another– which is already illegal, but that’s undoubtedly how the virus moved,” Whelan said.